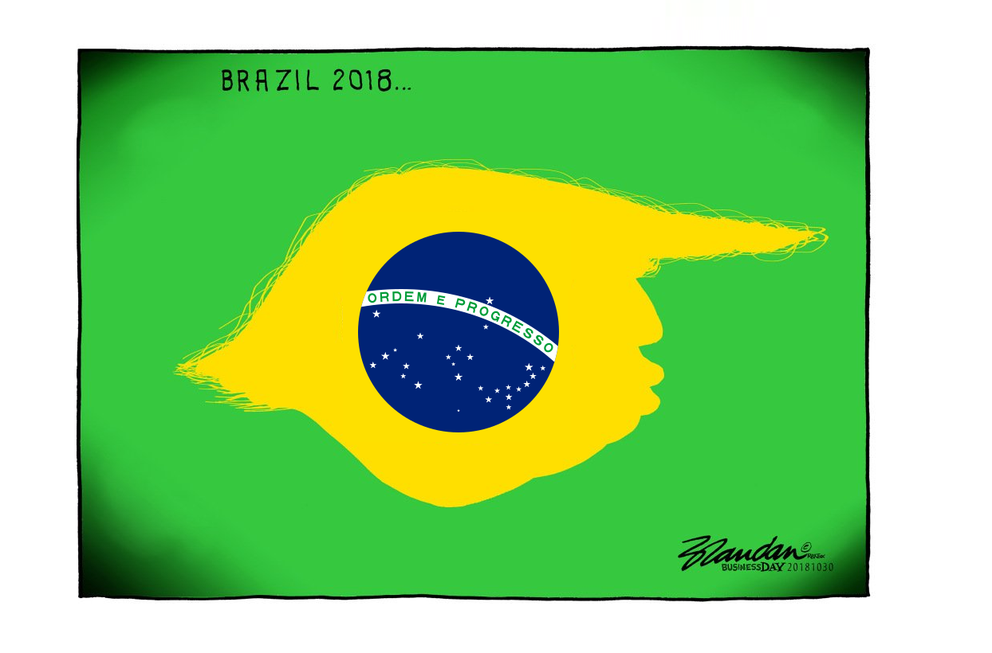 Long before he was elected this weekend as the new Brazilian President, Mr. Jair Bolsonaro made it known that he was a big fan of US President Trump and promised his supporters that he would copy the same economic and international policies as his US counterpart.

Like the US president, Mr. Bolsonaro attacks China’s economic advances, slams leftist regimes such as Venezuela and Cuba, has promised to move Brazil’s Israel embassy to Jerusalem and repeatedly claimed he would withdraw from the UN Human Rights Council.

In recent weeks he did change his mind as to whether or not he would withdraw Brazil from the Paris agreement on climate change though.

Be that as it may, it is clear for political onlookers that a major “bromance” could be brewing between the US and Brazil with Trump and Bolsonaro in place.

Related coverage: <a href="http://thegoldwater.com/news/40743-Trump-Had-Excellent-Call-With-Bolsonaro-Brazil-US-To-Cooperate-On-Trade-And-Military"> Trump Had ‘Excellent Call’ With Bolsonaro – Brazil-US To Cooperate On Trade And Military</a>.

Last year, when asked about his similarities to the US President, Mr. Bolsonaro stated: "Mr. Trump faced the same attacks I am facing - that he was a homophobe, a fascist, a racist, a Nazi. But the people believed in his platform. I was rooting for him."

“You can be sure Trump will have a great ally in the southern hemisphere. Trump is an example to me . . . and in many ways to Brazil.”

This will, of course, change Brazil’s foreign policy and could create difficulties for other major emerging economies such as China.

The man tipped by many to become Brazil’s foreign minister under Bolsonaro, Mr. Luiz Philippe de Orléans e Bragança, a descendant of Emperor Dom Pedro, claimed: “The summary of our story is the following: Brazil is open for business but closed to influence . . . We have to close ourselves from influence from the United Nations, China and large negotiating blocs like the European Union that have Brazil agendas.”

Such isolationist and “Brazil First” talk, combined with Mr. Bolsonaro’s admiration for Mr. Trump (they spoke on Monday in what POTUS labeled an ‘excellent call’), is a stark contrast to traditional Brazilian foreign policy.

One of his biggest upcoming changes seems to be liberalizing gun ownership, which commentators say will deliver a shift in crime to other countries.

Will we see Brazil break off the globalist`s shackles? Shall Brazil & her people rise? Shall the leftist be successful in a coup to regain power?

I pray for all peoples to recognize those that wish to oppress as well as those who wish to liberate!

The Elites want to ruke as overlords consuming EVERYTHING . People need to stand up to and STOP them .