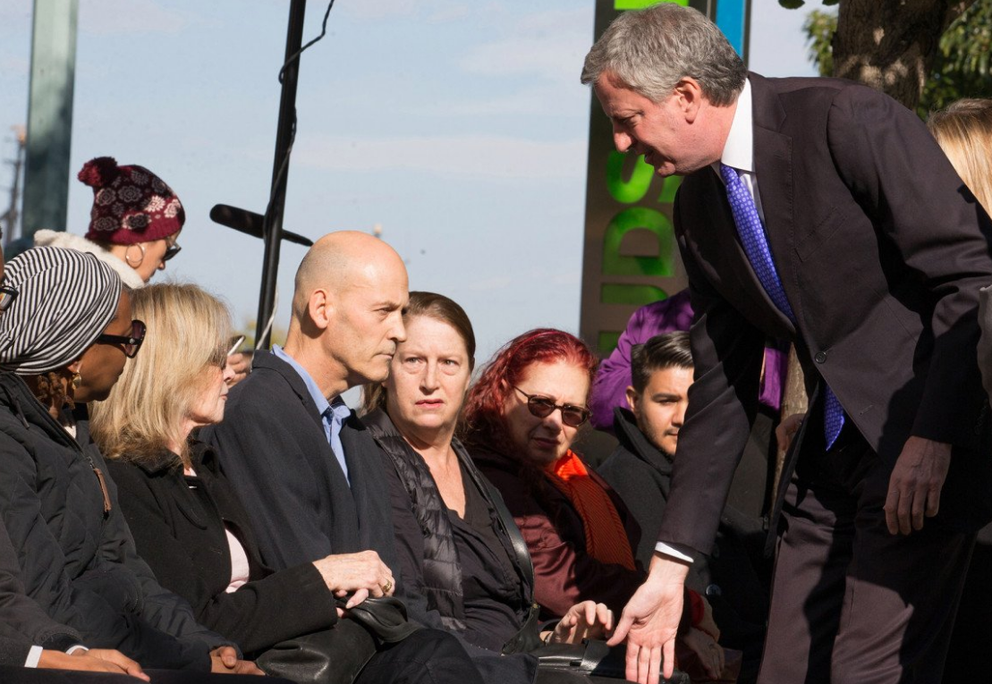 The Democratic mayor of New York, Mr. Bill de Blasio, was blasted online for botching the remembrance ceremony of last year’s terror attack on Halloween which killed 8 people. One of the victim's representatives even refused to shake the Mayor’s hand afterward.

Last year, in a vehicle ramming attack, an Islamist terrorist killed 8 people as he drove a rented pickup truck into cyclists and runners for about a mile of Hudson’s river park’s bike path.

<blockquote class="twitter-tweet" data-lang="en"><p lang="en" dir="ltr">Today, we solemnly remember the eight innocent lives taken as a result of a terrorist attack near the West Side Highway one year ago. This was an attack on our values, but New Yorkers will continue to remain defiant. We will not be cowed by fear. <a href="https://t.co/k87fjZsGOz">pic.twitter.com/k87fjZsGOz</a></p>&mdash; Mayor Bill de Blasio (@NYCMayor) <a href="https://twitter.com/NYCMayor/status/1057707420019916800?ref_src=twsrc%5Etfw">October 31, 2018</a></blockquote>

To pay his respects to the victims of the event, the city of New York had organized a short remembrance ceremony which was botched by several mistakes.

Firstly, one of the victim’s mothers, Ms. Monica Missio (whose son Nicholas Cleves died), was not invited at first and only received the last minute call warning her about the event. A family friend who showed up in her placed to represent the victim at the ceremony, Mr. Hugh Hales-Tooke, in protest, refused to shake the Mayor’s hand. He told reporters that Ms. Missio was “very hurt. She was very hurt.”

Secondly, despite managing to read aloud the names of all the politicians that had shown up, Mr de Blasio forgot to read the victims names during the ceremony, only referring to those killed as “eight good lives lost”.

Realizing his mistake only afterward, the Democratic mayor rushed to the stage and stated: “I apologize. This should have been part of the gathering to read the names of the eight that we lost.”

“So I want to right that wrong with apologies and do that now and ask everyone to bow their heads as we remember each of them.”

After the mayor was slammed on social media for the obvious mistakes, a spokesperson for New York city hall said that the reading of the names was not originally included in the program and Ms. Missio’s late invitation was because the event “came together very recently.”

I am not surprised at De Blaso's callousness. Wholly political with complete disregard for the victims and their families.

Imagine what HRC & the Dimms almost brought to America.

Power, this is what they still want. I lost all hope in the democratic party long ago.

I have been registered Independent ever since.

I always studied & voted for those I felt where most "good at heart" for us the voters vs. themselves/special interest groups.

This election please ask yourself… "Do I want to live in continuous fear of attack, if I do not believe as they do?" OR… "I do see that so far DJT has helped, not hindered American`s & the Country as a whole".

Time to see those who wish to subjugate us for what they truly are & represent. For if the truth is known of the intentions of this new democratic party…

Well they truly, would only have the vote of the criminals, the deviants & the deceased.

It's NOT the "Democratic" party. It's the Democrat party. NOTHING Democratic about it.