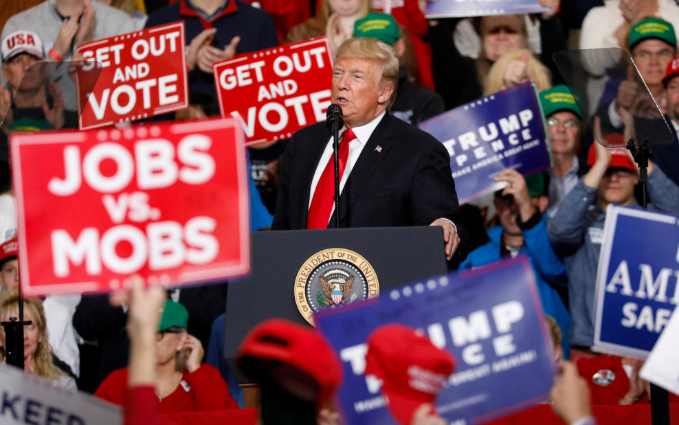 In the final stretch before the election, US President Trump was scheduled to hold three rallies in states with key Senate races (Tennessee, Indiana and Missouri) and in two in states with important races for governor (Georgia and Ohio) in what many now admit is the most intense political campaigning by any US president for a midterm election.

Revving up his base, Mr Trump has repeatedly said: “I need you to vote for a Republican House and a Republican Senate so we can continue this incredible movement.”

Two main data points were looking rather positive for the current US President.

Most polls asking voters which party they prefer saw Democrats take a seven-point advantage in the days leading up to the vote. That is quite the drop from the 9 point lead last month or even the 12 point lead three months ago. As most onlookers agree that Republican voting is underrepresented in US mainstream media polls (the 2016 Presidential Poll which was famously wrong springs to mind) it would suggest that while the Democrats are still favorites to win the House, Mr Trump’s intense campaigning may have helped the GOP pull closer.

Secondly, the numbers also point to record enthusiasm among registered voters, with some 70 per cent of them admitting they were this time round, very interested in the election.

Mr Larry Sabato, a politics professor at the University of Virginia, said: “When you have voter enthusiasm rates above 80 per cent for both parties, then big early voting and turnout rates are inevitable.”

“America is going to have a high participation rate for a midterm election, though still well below a presidential level.”

In at least 28 states, early voters have outpaced levels from the last midterms in 2014.

Democrats meanwhile are rallying their base with appearances by former President Barack Obama and television star Oprah Winfrey. Both of them came out in full force for Ms Stacey Abrams, the Democratic gubernatorial candidate in Georgia who is aiming to become the first female African-American governor.

a vote for a democrat is a vote for open-borders.

BULLSHIT, The GOP has never been behind this election cycle. Anyone that believes that BS rhetoric is an idiot.