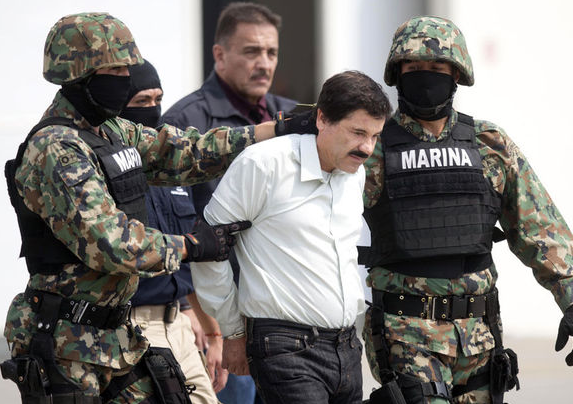 The lawsuit in Brooklyn can thus herald the definitive end to the criminal activities of El Chapo, whose life is the subject of a Netflix series.

The trial of Mr Guzman is seen as an extremely important "trophy" in the American "war on drugs."

The worldwide reputation of El Chapo is comparable to that of the mythical Colombian drug lord Pablo Escobar (who was shot dead in 1993).

The former leader of the powerful Sinaloa drug cartel is said to have earned billions of dollars by smuggling drugs and other criminal activities. In the state of Sinaloa, on the Mexican west coast, the cartel cultivated marijuana and poppy for the production of heroin.

Via the cartel, tens of thousands of kilos of cocaine were smuggled from Colombia to the US.

According to the US anti-drugs agency, the cartel was for a long time the leading supplier of illicit drugs in the US. The criminal organization is said to have been involved in murders and kidnappings of dozens of people.

A dozen American prosecutors, therefore, had cases against Mr Guzman. He was also charged in Chicago, Miami, San Diego, and several other federal districts in the US. The lawsuit finally takes place in New York, where prosecutors have many decades of experience in the fight against organized crime.

Guzman was arrested in Guatemala in 1993 and sentenced to twenty years in prison. But after eight years he managed to escape from the Mexican prison by buying off several guards and hiding between piles of dirty laundry. The drug lord was reintroduced to prison in 2014, but in July 2015 he managed to outwit the Mexican prison authorities once more. He escaped from the heavily secured prison of Altiplano via a tunnel of about one and a half kilometers.

In the end, he was arrested again in January 2016. He even gave an interview during his escape to the American actor Sean Penn, which appeared in Rolling Stone magazine.

Early 2017, Guzman was extradited to the US, where he now has to account for murder, drug trafficking, organized crime, and money laundering. In the meantime he has been locked up for almost two years in the Metropolitan Correctional Center, south of Manhattan, a prison sometimes described as being worse than Guantanamo. He is kept in a cell of about fifteen square meters without windows.

On weekdays he can only leave his cell for an hour to work out in the gym.

The lawsuit starts Monday with the composition of the twelve-member jury. That jury will also be completely protected during the course of the trial, for fear of reprisals from the drug cartel. A week later, on 12 November, the actual trial starts. It is estimated that the process will take three to four months.

If Guzman is found guilty by Judge Brian Cogan, he risks a lifelong prison sentence. The death penalty cannot be pronounced, because Mexico only wanted to extradite it to the US under that condition.

The prosecutors have some sixteen witnesses ready to testify against Mr Guzman. One of them is Damaso Lopez, who, because of his law studies, has been given the nickname 'El Licenciado' (the academic). Lopez was seen as a confidant and possible successor to El Chapo, but after his extradition to the US in 2017, he agreed to collaborate with researchers. His sons are now running his business.

The burden of proof against the drug boss seems to be overwhelming: his file is about 300,000 pages thick. Guzman can count on services from a top lawyer. Besides Eduardo Balarezo and William Purpura, Jeffrey Lichtman was also recruited, who previously successfully defended the son of Mob boss John Gotti.

Trial, sentence & execute. All in under a week.

Time to start setting examples to such violent criminals & kingpins.