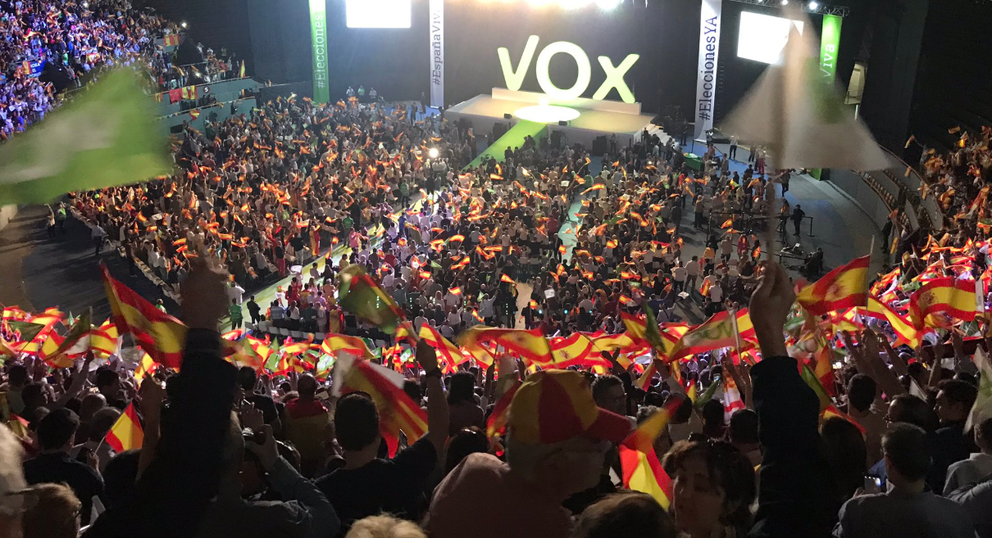 9,000 people showed up in Madrid last week to support Spain’s first right-wing nationalist party ever since the biggest country on the Iberian Peninsula chose for democracy rather than the dictatorship of Franco in the 1970s.

Following in the footsteps of Britain’s UKIP, France’s National Front, the Alternative for Germany (in Germany), the PVV in the Netherlands, the Sweden Democrats (in Sweden) and the Lega Nord in Italy, VOX has ridden the backlash to open immigration to electoral success.

As Italy started turning away ships and Hungary closed the Balkan route, Spain is the only entry to Europe left for African immigrants. The record numbers of arrivals this year mean that more people are supportive of voting for an anti-immigrant party like Vox.

Spain’s far-right startup is poised to pick up its first seats in European Union parliamentary elections next year and is given a shot at becoming the first anti-immigration party to enter the Spanish parliament since democracy was restored.

Vox wants tougher criminal punishment for illegal-immigration mafias “and those who cooperate with them, be they non-profits, businesses or individuals.”

Another speaker explains their aim is to “take back our national sovereignty on the application of our courts’ decisions. Terrorists, rapists and serial killers would no longer benefit from the protection of European organizations, as they have to date.”

“Welcome to the resistance! We have come here to send out a message: we are not ready to let our dignity be trampled!”

<blockquote class="twitter-tweet" data-lang="en"><p lang="en" dir="ltr">The Spanish far-right VOX party has risen rapidly in polls in recent months. Many are blaming the Catalan independence movement.<br><br>Blaming Catalonia for the rise of the right is strange since Catalonia has the second-lowest prevalence of &quot;far right&quot; citizens of Spain&#39;s 17 regions. <a href="https://t.co/2alupZ2eOk">pic.twitter.com/2alupZ2eOk</a></p>&mdash; Joe Brew (@joethebrew) <a href="https://twitter.com/joethebrew/status/1049390383292125189?ref_src=twsrc%5Etfw">October 8, 2018</a></blockquote>

And of course the closing speaker was party president, and the probable opposition leader in the Spanish parliament at the next time Spaniards go to the polls, Mr Santiago Abascal, who makes a rousing speech: “The living Spain has awoken, thank God. Spain does not rise up randomly. A nation reacts when it has historical inertia, when there is blood coursing through its veins, and when it is aggravated, as Spain is being aggravated now.”

“We did not come here to win with Spain. We came here for Spain to win with us!” he concludes. “Vox lives so that Spain may live. ¡Viva España!”

More, more & more immigration. Open borders worldwide. One law to rule them all. Let the blood continue to spill. Until the whole world is a needy third world mass of cattle & sheep.

We must remember that ultimately this isn't about the intention to have 'Laws' governing the masses. It's about ONE RULE dictated by (((ONE GROUP OF PEOPLE))) who think they have the right to destroy everyone else for the sake of their own nepotistic power. Pure EVIL!!!! Send (((them))) ALL 'back' to Israel, and then demand their borders be opened WIDE!!!

Thank God for Trump! Nobama was setting himself up for his role as the Global Dictator and the hildabeast was the final nail in our coffin.

We are heading in the right direction w/ asylum being revoked if caught here illegally but the birthright citizenship needs to end proactively by booting anyone "birth-righted" after a certain date.

what is taking the Europeans soooooo long to figure out that they are being invaded.