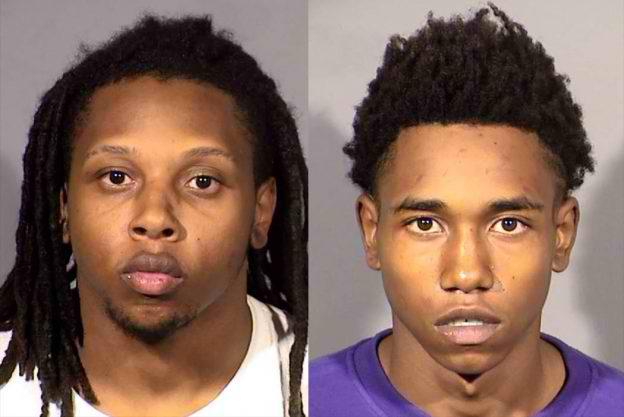 Authorities have arrested two North Las Vegas suspects in the horrific fatal shooting of an 11-year-old girl inside her home.

During a press conference on Thursday, police stated that the two suspects, 20-year-old Jarquan Tiffith and 16-year-old Damion Dill have been arrested. The two were among the five men suspected to be involved in the fatal shooting of Angelina Erives.

Surveillance footage earlier released by the police show three of the suspects shooting up the home and fleeing in a Nissan Altima. Two suspects remained in getaway vehicle that sped away from the suburban neighborhood after the horrific crime was carried out.

The three suspects mercilessly shot rounds into Erives’ family home in the 6700 block of Courtney Michelle at around 9;30 p.m. on November 1 before running back to the vehicle. The poor 11-year-old child was sitting in the family kitchen and was killed instanly from the gunfire.

According to the investigators, it turns out the gunmen opened fire on the wrong house, but their “mistake” already claimed the life of the innocent girl.

Police say that as the suspects were fleeing, a neighbor went after them and opened fire at their vehicle, killing 17-year-old suspect Guy Lee Banks III. The teen-suspect died of a gunshot wound to his head.

Police have also identified and arrested another 17-year-old suspect. The fifth suspect remains at large. Police decided not to release the identity of the fugitive so as not to compromise the investigation.

It is not yet clear who was the real target of the suspects’ shooting and their motivation for the crime.

Police continue to ask the public’s help, especially as regards any crucial information that will lead to the arrest of the remaining suspect. Anyone with relevant leads is requested to call the North Las Vegas Police Department at (702) 633-9111.

Just another day in Niggerville….

And these niggers want to try to blame whites for their bullshit. Yeah fuck you niggers. We won't be guilted, by trash, into accepting responsibility for your retard ass actions.

Thae black people are always throwing the race card to us whites. And their out there killing each other. They have found out years ago that saying we are racist just so they can get their way and win the argument.

Without negros and muslims the earth would be paradise…