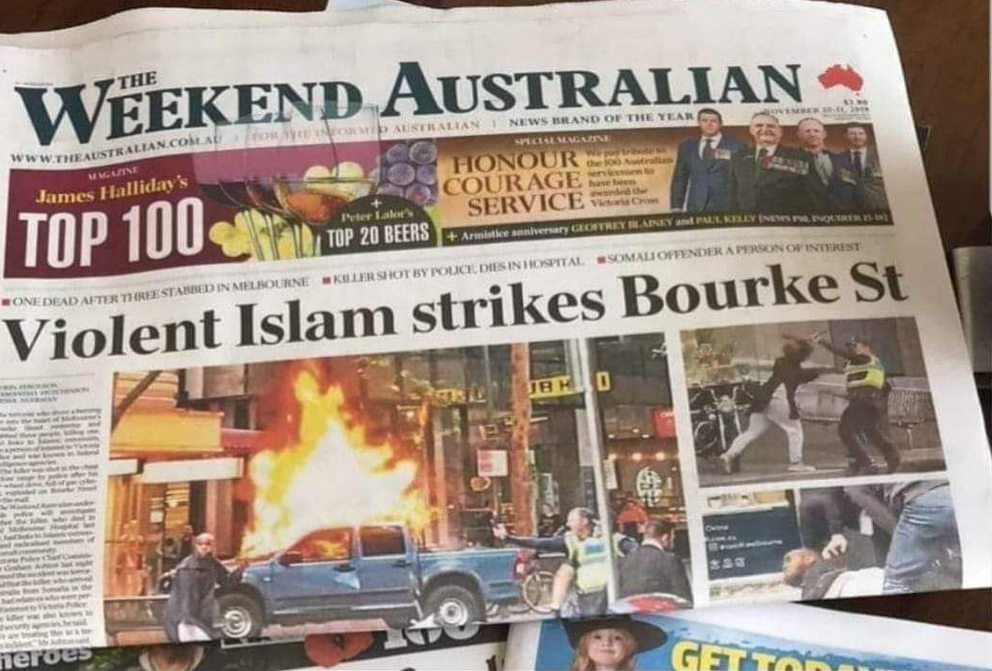 In a quite refreshing tone which was very different from his predecessors, Australian Prime Minister Scott Morrison said that explanations like ‘mental health’ as they’ve often been used in the past were ‘all good and well’ but then went on to describe radical Islamism as Australia's greatest threat in the wake of the Melbourne terrorist attack of last week.

The PM stated: “We would be kidding ourselves if we did not call out the fact that the greatest threat to religious extremism in this country is the radical and dangerous ideology of extremist Islam.”

On Monday morning, Prime Minister Scott Morrison, who took a more rightwing approach to this than any of his fellow party members, clearly said extremist Islam was 'the elephant in the room', adding Mr Shire Ali's reported marriage problems and drug addiction did not negate the fact he was radicalised.

“I think that's an excuse. This bloke, radicalised in Australia with extreme Islam, took a knife and cut down a fellow Australian on Bourke Street,” he stated.

“I'm not going to make excuses … he was a terrorist. He was a radicalised, extremist terrorist.”

Party member and former PM Mr Tony Abbott claimed Mr Morrison was “quite right to say on the weekend that there is a problem within Islam.”

Mr Abbott explained that he believes the vast majority of Muslims in Australia were “decent people who have joined our team and have embraced the Australian way of life”.

“But there is this small minority that have this ‘death to the infidel’ mindset and the sooner Islam can rid itself of that, the better for everyone.”

According to Mr Abbott, a handful of Muslim extremists believed “there is something wrong, evil, almost satanic with the way we live and this is their response.”

“The sad truth is there are a small number of people living in our midst who wish to do us harm.”

The Oz PM – is his name by any chance Capt. Obvious? If not, it should be changed to reflect his ability in stating it.

Finally, some official recognition of the true Islamic agenda. Violent, extreme is what it is and as long as people call these attacks "mental illness" as was in the past, there is no hope for the future. So Im glad to see the truth begin to be reported. For that alone, Morrison gets my backing. Lets hope this is just the beginning of an aussie wake up to reality. Anyone who disagrees needs to read the Koran

More diversity should fix this

Sooner, or later, everyone will have to admit that there are NO moderate Muslims and it is certainly not a small fraction of Muslims that feel this way and act this way.

If the death penalty is in order, then give them the death they would fear to stop them. It’s a religious war they are engaged in……..give them a hell sending end as examples of resolve to stop their madness. It worked in the Philippines.