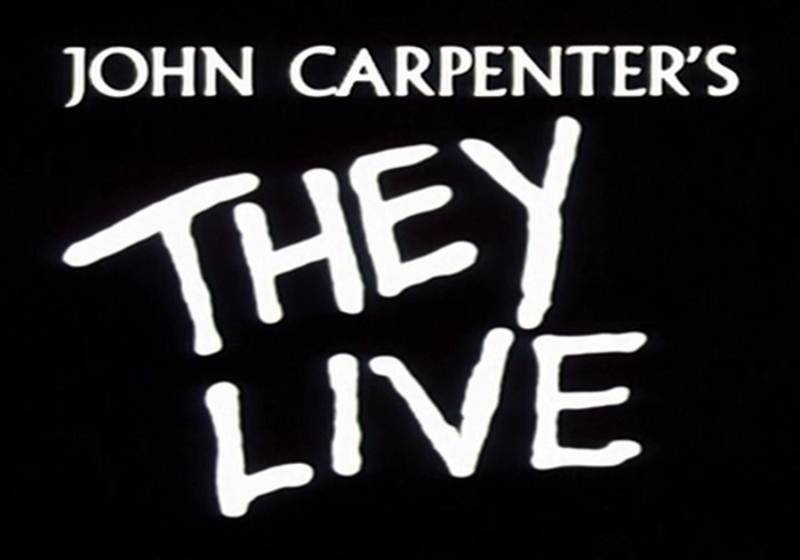 It is the 30th anniversary of John Carpenter's classic film They Live this month. They Live is a paranoia-tinged, Lovecraftian tale with a grave warning regarding groupthink and perception. The old phrase to see through rose-colored glasses is turned on its ear when the main character discovers a box of sunglasses that allow him to see beyond the facade, what Situationists would call "the Spectacle" that overlays reality.

John Smith is the classic "generic" name, but if we add one more layer of dehumanization to the already non-specific we end up with John Nada, (Spanish for nothing). Nada is the main character and hero of They Live played by "Rowdy" Roddy Piper. Piper whose ad-libbed line "I have come here to chew bubblegum and kick ass and I'm all out of bubblegum" would become an indelible part of cult film history.

John Carpenter uses the pseudonym of Armitage for his screenplay which is also the last name of the other main character, Nada's reluctant sidekick, Frank played by Keith David. Armitage, by the way, is an obvious reference to a character in master of horror, H.P. Lovecraft's The Dunwich Horror).

Nada's life changes forever when he dons a pair of the Hoffman lenses. They appear to be ordinary sunglasses but while wearing them he's able to see past the veneer of normalcy and realizes that there are creatures actively programming the humans around them to do their bidding. I can't prove this, but I've always been pretty certain that the Hoffman lenses are a reference to LSD which was synthesized accidentally by Albert Hoffman.

A bit of foreshadowing early on in the film is a character referred to as the man with a beard who appears in between the snow and the static during television broadcasts throughout the movie.

His monologue acts as an explanation, though the first time Nada hears it he, like most everyone else, seems to barely notice it and completely miss the message.

"Our impulses are being redirected. We are living in an artificially induced state of consciousness that resembles sleep. (…) The poor and the underclass are growing. Racial justice and human rights are nonexistent. They have created a repressive society, and we are their unwitting accomplices. Their intention to rule rests with the annihilation of consciousness. We have been lulled into a trance. They have made us indifferent to ourselves, to others. We are focused only on our own gain. Please understand. They are safe as long as they are not discovered. That is their primary method of survival. Keep us asleep, keep us selfish, keep us sedated."

Carpenter's original idea of They Live, which in 2015 he quipped was a documentary, was meant to be a populist cautionary tale warning against the Reagan era yuppies. Slovenian Marxist philosopher Slavoj Žižek referred to it as one of the "forgotten masterpieces of the Hollywood left."

but in actuality, things aren't that simple or cut and dried. The dividing line between right wing and left wing, authoritarian and libertarian are often used by those (metaphorically speaking) bug-eyed ghouls of the over-party for whom political party lines are just a means to rally the hordes of sleeping masses.

Film critic Rob Ager of <a href="https://www.collativelearning.com/CLS%20FAQ.html">Collative Learning</a> recently released a video posing an intriguing question. It's obvious that the humans are enslaved, hoodwinked and in the thrall of the invading forces, but are they also being led? Are they feeding from the same trough of mind control?

Ager points out how the creatures (referred to simply as "ghouls" in the script) bear a striking resemblance to many a sci-fi alien with large bug eyes and a lipless face. The evolution of empathy is closely tied to facial expression and eyes and lips are some of the most important in expressing emotion which in turn leads to empathy. Chimpanzees, dogs, cats, all have eyelids and lips. Compare that to the stark lipless, bug-eyed face of any arachnid or insect and it's easy to see that

In Ager's analysis, he points out how even the ghouls themselves seem to be interested in buying the simple propaganda that exists everywhere despite the fact that they can see what's really there.

In the scene where one of the creatures speaks into their wristwatch communicator, "I've got one that can see," it's made apparent that the ghouls see everything as Nada does with the Hoffman lenses on.

If so, though, are they consuming the brainwashing, programming and propaganda as well. This "mutual enslavement concept" is an interpretation I had not previously come across regarding They Live. Also, don't they have even more to lose than the humans? Add seeing on top of being in the situation and a "double-think delusion" is evident in which they see that they enslave you, but not how they too are enslaved.

Another idiosyncrasy noted is how some of the monsters socially interact, even as friends, with some humans. Also, the hive mentality seems to cut both ways. When Nada is being hunted, the ghouls act in concert, but the human cattle are also very obviously led in unison by the ever-present subliminals on every billboard, magazine, newspaper and beamed through the TV broadcast.

Though the humans are obviously herded by the monsters, the monsters themselves and humans who work with them have more to lose. In essence, they're controlled via their positions. Trapped in their ghoulish, gilded cages so to speak.

In case you haven't seen the film, I won't offer up any major spoilers, but would encourage you to see the movie and once you have to check out Rob Ager's recent commentary which is, itself, a small part of a larger study he's working on with Collative Learning.

Rob Ager has been lauded for his film criticism and movie breakdowns in the New York Times, Digital Spy, Irish Times, Indiewire, Entertainment Weekly, Jakarta Globe and other major publications around the world. He even appeared in a French documentary about the Mad Max series along with the likes of Guillermo Del Toro and… Noam Chomsky?

Despite the accolades he's received in the entertainment world, his criticisms of imperialism, corrupt banks and political correctness weren't as well received by many in the entertainment world. You can find Ager's videos at his YouTube channel and even more premium material at his website <a href="http://www.collativelearning.com/>Collative Learning</a> and <a href="https://www.patreon.com/RobAger">his Patreon page</a>.