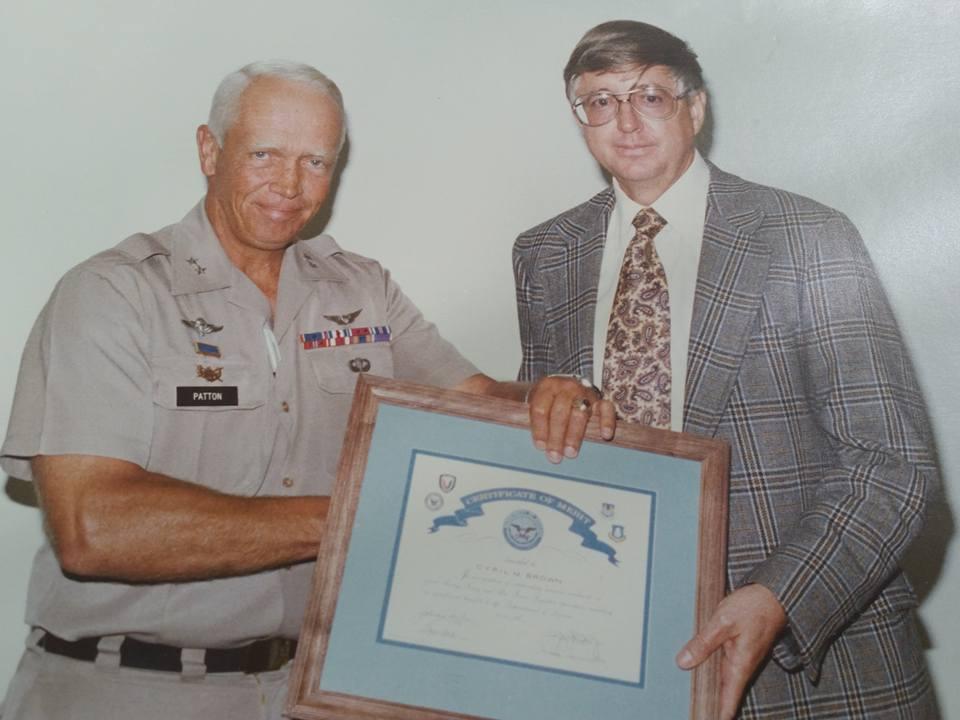 The last time I had a beer on shift was when I heard Harlan Ellison had just died. I just picked up a couple bottles of San Miguel on the job again. That time I wasn't choking back tears though. Here we are just past Veteran's day and I've learned that my great-second cousin Cyril Murray Brown Sr. has passed away. It's ironic, but so much is.

We were actually brought together initially by a death in the family. When my grandmother (his cousin) died in 2014 we took up a correspondence. He had caught wind that there was a writer in the family and took a fancy to my work and I came under his tutelage which I greatly appreciated. Cyril was not only an accoladed army veteran of over three decades but was also a scientist with multiple scholarly works published in academic journals. In addition to the <a href="https://link.springer.com/book/10.1007/978-1-4613-2119-4">academic publications</a>, Cy also wrote fiction and non-fiction and when he finally retired from the US Army worked as an editor at a publishing house.

Over a year into our correspondence Cy's health took a bit of a downturn. In a letter from June of last year he expressed it with his usual poetic eloquence:

<blockquote>I’m still kicking, though my kicks are without force and the rebound hurts enough that I wish that I had not kicked in the first place. I meant to write earlier but have been tied up trying to get things done and having very little luck at it.</blockquote>

Later on in the same missive he relates a story that resonates with the spirit of Veteran's day, so considering the occasion I'll share here:

Forty-eight years ago, Ancel and I threw the kids in the car and packed our bags for a Memorial Day weekend. We were living in Germany at the time, about twenty miles north of Heidelberg. We intended tracing the route that involved the movement of German and American troops during the Battle of the Bulge. We made it to Bastogne and points beyond via Luxembourg City and the Ardennes, where we stopped and had a picnic. Some twenty-four years earlier, there had been something other than a picnic on the very spot where we stopped to eat sandwiches, pickles, cheese, watermelon and other picnic goodies. The ants left us alone.

As we approached Bastogne, we came up on a Sherman tank turret mounted in concrete along the right side of the road. “Welcome to Bastogne.” It was a sobering time for us, having read quite a lot about the battle before actually setting foot on the battleground itself.

I had meant to write some blog of sorts, it being D-Day. Maybe I’ll get a chance to do it later on. Take care. We may get to meet one of these days, either here or down in your country.

Remember our fighting men who gave it all up back in 1944. So many have forgotten what that was all about. I wonder how many folks could tell you where Bastogne is or even what a Bastogne is. Do you put it on a bun? Lord help our poorly educated folks coming out of our schools today. But then it has always been about the individual, hasn’t it? Those that want to learn will, and they will expand what education they get through their own natural curiosity, assuming it exists for them.

Another excellent vignette from Mr. Brown was shared Veteran's Day of 2015:

As another Veterans Day starts winding down, we realize how the passage of time has taken down our heroes who managed to survive the enemy weapons of WW II, Korea, and Vietnam. Time is relentless, just as a sustained artillery barrage is. I am not forgetting those of recent wars; I am focusing on those who have departed this life, either through enemy action or the natural processes that we all face, and those who are still with us.

I salute the following who I know or have known during my years serving in or serving with the U.S. Army. Boys, you are among the finest. Just wish all of you could hear me.

George Shannon, who kept the COMZ commander on time and is, I know from personal experience, one of the best soldiers that ever put on a uniform; Dick Peters, a good soldier to be sure; Pete Fast, who thought helicopters a little tame; Claude Shaw, who was severely injured while rescuing an Air Force pilot who had bailed out on takeoff. (Claude, where are you?); my cousin, J.P. Blackmon, who found Conecuh County clay more hospitable than the waters of the South Pacific; Carlen Byrd, a member of the, now legendary, Band of Brothers airborne brotherhood; the colonel who told me that you never hand in both your prisoners at the same time; Charlie Noyes, who did double duty in the Peace Corps and the U.S. Army; Jason Fisher, an underwater sailor from the nuclear age; Jerry Poe, the elder and the younger who helped hold the Corps together while rooting for the Tennessee football team; Gene Juelg, who drove the German rocket scientists crazy before they could escape to Huntsville; and Major General George Smith Patton, IV, a great soldier cast in the same mold that produced his father, ensuring that when you were around him, you could rule out boredom; and my brother-in-law, Chuck Brougham.

I only list a handful of those who have served, but I want to recognize them all, the living and the dead who have ensured that we live in such a nation as we do, a nation that allows us to speak our mind, to express our political opinions without fear, and to enjoy the good, clean, invigorating air that exists only in the greatest free nation that ever existed.

One thing I admire, envy even, about Cy's gift of gab is how he was able to tie things together with such shrift. As an engineer, he was trained to find points of fault and eliminate them which likely assisted him in his editorial activities. I, however, have always had a tendency towards parenthetical thinking, run on sentences and rambling.

In January of 2017, I signed off a rather rambling letter with a bad pun, "Ok, now, I WILL have to make myself sign off now, that last couple paragraphs of prose was so purple it was practically wine or at least mulberry!.." His response related the state of his back and a swelling in his hands that kept him from being able to operate a keyboard. Despite being witty and wise as usual, his words reflected a wine-dark tint somewhere between plum and black:

"Ah, yes, the old back, that stacked pile of calcium blocks that defy gravity to some extent by trying to assume a vertical position. Newtonian physics would have gravity working from top to bottom. But that is not the only force, the vertical force. Bend this way, bend that, and our angle becomes that falling apple, especially when we're falling, gaining speed as we approach the Earth. Forces unfriendly, especially to older people (old people–that's me), are working on us. Our contact with the Earth, of course, does not remove the force, it only transforms it to a static force, looking for another way to journey to the center of the Earth."

By February, a month later, his condition had grown worse and he began signing off, "Your Shaky Cousin (The Limping Bard)."

To which I curtly responded, "Dammit, I hope you get your hand looked at! You know the story of Mr. Bojangles, dancing and the dog and I don't want to have to write a sad song about the limping bard!" In a sense, I guess this is that sad song.

I hope any of you who are reading who have loved ones, friends or family who served in the military made sure they felt appreciated this Veteran's Day. I am thousands of miles away from Kentucky and didn't know until hours ago that the message I had sent on the 11th thanking Cy for his service would never reach him.

Cy was honored by General Patton IV himself related to his service as Former Program Manager at Materiel Readiness Support Activity and Former Army Oil Analysis Program Manager in the US Army. As I said, he was a scientist, specifically an engineer who, via spectrometric analysis found the points of failure and areas of inefficiency and found workarounds. In doing so, his work saved (continues to save) countless dollars related to maintenance, <a href="http://www.dtic.mil/docs/citations/ADA152993">extending the life of aircraft components</a> and avoiding unnecessary costs.

My heart goes out to Ancel, his lifelong love and the rest of the family touched by this tragedy. Cy was a one of a kind and I would say "they don't make many like him these days" but I think his was always a rare breed.

Sad to hear of this.