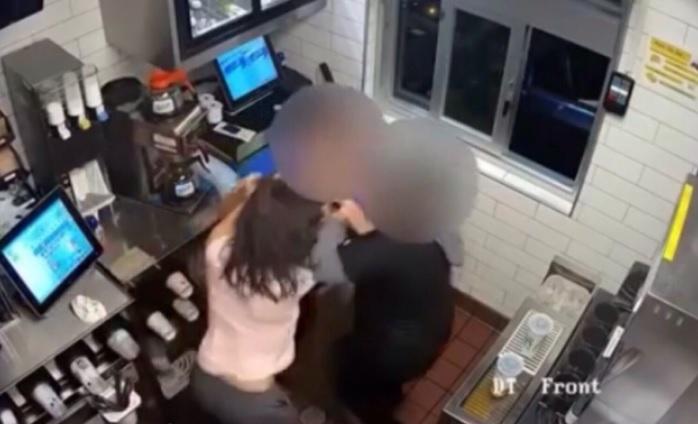 A brawl between two women started at a McDonald's after the employee at the drive-thru window was attacked by the woman at the window all over ketchup. The women allegedly choked the employee and were then told to leave, according to Santa Ana Police. The assault was captured on McDonald's surveillance footage, and police are searching for the suspect.

The incident started after the customer, a woman wearing a pink shirt and gray sweatpants, got out of her car and leaned into the drive-thru window because she believed something was missing from her order. The incident took place on October 27th. The woman walked in a back door of the McDonald's which had been left open and verbally abused the manager.

The manager said she was in disbelieve over how irate the customer was over a simple pack of ketchup. The woman managed to slip in through a door left open after an employee took out the trash. The customer went after the woman at the drive-thru and began choking her.

"It happened all so fast. One of the girls did help me. The rest, I don't know, I wasn't really aware of what was going on," the manager said who was attacked. We're starting to see more of this type of incident: people upset by service take it beyond a complaint. They physically assault the workers."

A minute after the woman walked in and began assaulting employees, a man comes in and tells the female attacker its time to leave. It took a man to settle the situation and the employees are lucky to be alive. If the woman had a weapon she could have killed everyone in the restaurant.

Cpl. Anthony Bertagna said, "We're starting to see more of this type of incident: people upset by service take it beyond a complaint. They physically assault the workers. Fortunately, the male you see got her out of the store otherwise we don't know where this would have gone." The 22-year-old manager suffered minor injuries including shock and described the getaway vehicle as white.

Sounds pretty tr*nsphobic to me m80, class action lawsuit when

CIVILIZED HUMAN BEINGS ARE ON THE ENDANGERED LIST. EVERYONE IS BECOMING HUMAN GARBAGE.

THIS IS WHAT REAL ZOMBIES LOOK LIKE. NO MORALS NO VALUES, NO UPBRINGING, NO COMMON SENSE, NO CONTROL, NO GODLINESS, NO LOVE, NO HUMANITY.

Were they illegal mexicant's. Probably!

they were white trash is what they was

Dumb jig, they were OBVIOUSLY MEXICANTS, you moron.

How many times have I gone through drive-through and I get no salt and no ketchup for the fries. Do you people think we keep these items in the glove compartment? The packets contain half of what they once used to and at times, they cost extra. Fast food is no longer affordable and the service sucks. Give the woman her condiment and cut the CEO’s multimillion dollar compensation ffs.

Lock her ass up.

Take away her car & Driver Lic. since she committed this crime with the aid of her vehicle and Driver Lic.

Otherwise she may ram the Mikey D's with her car in the future.

Unless it returns to it Business Core of serving good food fast, inexpensively and doing it correct the first time.

Right now too many customers wonder if that "Special Order" will that be 1 spit or 2?

BTW: my own example and test I ran for a few years, before I just plain quit Mikey D's.

I ordered $1 Hamburger with JUST mayo.

About 1 in 9 got that simple order right.

I had even gone as far as explaining the order. Saying Bread, Meat, Mayo, Bread only. Only to see it with a wide range of order items added.

How about you just order the fucking burger the way it is on the menu.

What it is with Americans and their extra special orders.