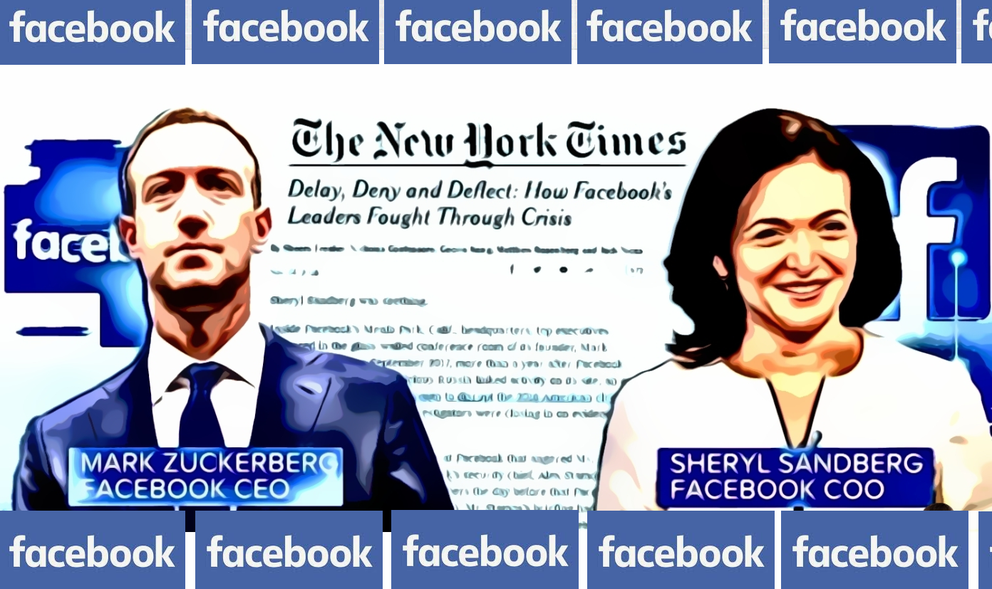 Facebook CEO Mark Zuckerberg and COO Sheryl Sandberg have both strongly denied the claim that the social media site paid a lobbying firm to write ‘fake news’ articles against Democratic donor Mr George Soros and rival tech firms in order to discredit them.

According to an article in the New York Times this week, Facebook paid a Republican-leaning PR firm to spread rumors about, amongst others, Apple CEO Time Cook and Democratic donor George Soros in order to deflect attention away from them during the ‘Russia’ scandal which claimed that the Kremlin had sought to interfere in the 2016 Presidential Election via social media platforms like Facebook and Twitter.

COO Sheryl Sandberg immediately denied the allegations and stated: “We absolutely did not pay anyone to create fake news… that they have assured me was not happening. And again, we’re doing a thorough look into what happened, but they have assured me that we were not paying anyone to either write or promote anything that was false. And that’s very important.”

Interviewers from CNBC asked Ms Sandberg what she thought about the demand of Mr George Soros, who is now calling for an independent investigation. Is Facebook considering that?

Ms Sandberg responded: “Right. We're thinking through what that would look like.”

CNBC then told her that “every time you're presented with a problem and people ask for transparency or an independent investigation Facebook deflects and says : well, we'll look into it."

In other words, the COO was back to her favorite game of deflecting just as the original article blaming her had predicted she would.

Meanwhile, CEO Mr Zuckerberg responded to the allegations during a conference call with investors yesterday, saying: “Look, I learned about this reading in the New York Times yesterday,”

The call, which was supposed to be about Facebook’s new content moderation practices quickly turned sour as reporters pressed the CEO for his answers to the allegations. He stated: “as soon as I learned about this, I talked to our team and we’re no longer working with this firm.”

“The bottom line is the intention was not to attack an individual but to demonstrate that a group that was presenting itself as a grassroots effort was in fact funded by … was not in fact a spontaneous grassroots effort.”

“I have tremendous respect for George Soros.”

Lying jews….. what a surprise….. they also lied about their beloved, "holocaust". hitler did NOT gas the goddamned pos jews but i wish he had.

ZUCKerberg owes every user of FACEBOOK and every person peripheraly affected of His Data Betrayal a million dollars as reparations. Yes, a million ……. dollars.

ZUCKerberg wants to censor who uses FACEBOOK —- but says WE cannot censor who comes into Our house?!

Take the locks off his doors. Take those WALLS down from around ZUCKerberg's houses. NEVER allow him to file a "breaking & entering" complaint because ZUCKerberg wants anyone to be able to "break & enter" America.

he never served in uniform so he should "share" all his money with those who "gave all"or were wounded saving HIS FREEDOM and PROPERTY.

Time to recognize ZUCKerberg as an enemy of the People and the Nation.

Why hasn't Sheryl Sandberg been fired? She knew and approved everything going on.

Cambridge Analytica had bought data on tens of millions of Facebook users that had been extracted from the social network by an academic named Aleksander Kogan. Kogan did so using a personality quiz app, and claimed at the time that the data would just be used for academic purposes, not for targeting voters with tailored messaging.

ZUCKerberg owes every Victim a million dollars as reparations.

The great & glorious Sandberg is part & parcel of this data betrayal ….. she knew what was going on.

"Not only is Sheryl Sandberg a member of the SPECIAL EXECUTIVE SERVICE and COO of Facebook. So is Marne Levine a member of SES and COO of Instagram. (Being a member the usg "SES" pays 500+K per year, is anonymous–no one knows who they are, and #3, most were appointed by Obama (over 8,000!) and are supposed to UNfireable.).