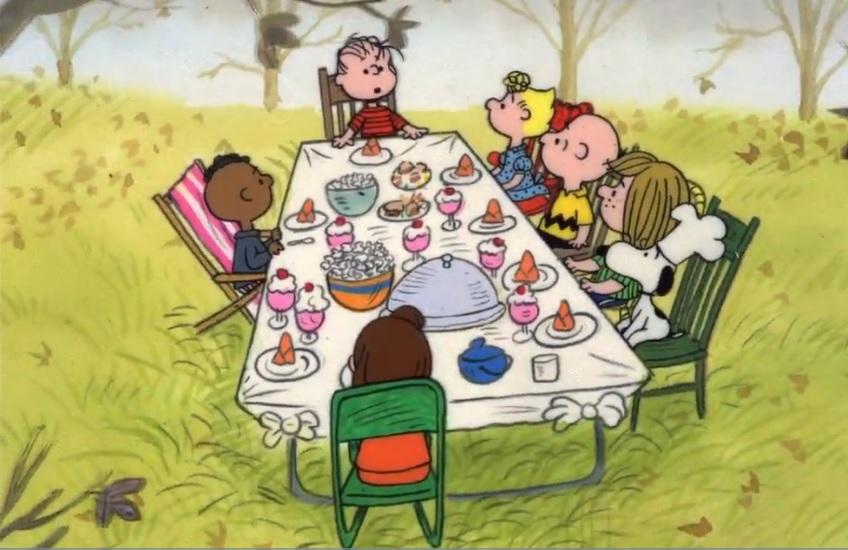 "A Charlie Brown Thanksgiving" Under Fire for Racism

ABC aired the animated holiday classic "A Charlie Brown Thanksgiving" and what viewers would have normally enjoyed as a nostalgic holiday cartoon turned out to offend many of them. The warm and fuzzy feeling of the Charlie Brown cartoon was ruined by the way one character, in particular, was treated.

The show is about the holiday meal that gets off to an unorganized start when Peppermint Patty calls Charlie Brown, invites herself over, and gets the game of telephone going. Before you know it the whole Peanuts gang is on the way for a Thanksgiving dinner at Charlie Brown and Sally's house. The event takes a turn when Charlie Brown is convinced, partly by Linus, to have two Thanksgivings.

The gang arrives to be greeted by buttered toast, pretzel sticks, popcorn, jelly beans, and an ice cream sundae at a table in the backyard. Comicbook.com says, "Franklin, the one and only black friend in the group, is seated by himself on one side of the table while the other is crowded with the rest of the friends." To make matters worse for the offended viewers, "On top of that, he's sitting in a lawn chair as opposed to everyone else's proper furniture."

The left loves to point out skin color and focus on it; it's part what they do to espouse victimhood which in turn requires more government protection and more government is the answer. That's how pointing out a holiday cartoon gets spun into an attempt to call the entire Peanut Gang "racist," it is used to promote the idea of victimhood which fits the liberal left's agenda, they want everyone to be the victim.

Place's like London have already made it a crime to defend yourself; you must run away by law. If this were truly a racist thing about the color of a person's skin, what about the little white girl sitting all alone in an even smaller chair on the farthest end? This Charlie Brown Thanksgiving cartoon has aired every year since November 20, 1973, and now all of a sudden it's about the color of the little cartoon characters on the screen to make people feel bad and ashamed for liking a beloved cartoon.

You don't have to watch Charlie Brown's Thanksgiving, I did, and I enjoyed it and it never once occurred to me that the Peanut Gang was a bunch of racists for making the black kid sit on a lawn chair. This is the crowd of people who want trigger warnings and safe spaces while at the same time they want open borders so our country can become overrun and turned into a third world shithole.

Snowflake alert! Snowflake alert! It’s funny that African Americans want to culturally appropriate such a”white” holiday. I wonder how many Puritans were from Africa? Satire folks, satire. It was probably a basement dwelling liberal that was offended. The beginning of the song from the early 70’s Hooked On A Feeling should be more offensive.

go WE ARE NOT FROM APES ! HISTORY IS OPENING ! SMILE AND MAGA ALWAYS ! from elsewhere smile and be very proud for the USA and NOWTIME President.. and Brave media sites…..

You DIDN'T even know his name did ya?, you cucked SJW…

So if I'm not offended….

If my Late 100% Ojibwa Grandmother was NOT offended…

~You triggered idiots amuse me!!!

Ironic, because the goldwater is under federal investigation for being an anti-Semitic hate group who is trying to incite a white nationalist domestic terroristic wave. white trash.

THE BLACK BOY DIDNT WANT TO SIT NEXT TO THE WHITE KIDS. ITS A TWO WAY STREET.

Nobody loves me, everybody hates me, guess I'll eat some worms:

Big ones, fat ones, little ones, skinny ones, even the ones that squirm.

Send these racists to the gulag!

I am sure soon some LIBERAL BLM Type will be all over the TV claiming.

Any White/Hispanic or Asian person wearing Black Tennis Shoes is a racist because it symbolically represents the foot of the White/Hispanic/Asian community on the back/neck of the Black Man.

An as Media promotes this Made For TV protest, it will only re-enforce my beliefs that the Media knows there some viewers are so dumb (pick any color/Race) they will buy into any thing the print or Air.

Franklin didn't want to sit by Snoopy, the dog, because he hates dogs.

I've always been white. Not my choice. Always had lots of friends, many different 'colors'. All color blind. But then we learned the word racist. Now I prefer to spend Holidays alone.

Did I change, or did all the people of color change? I much preferred fewer color blind friends.

To the C.S. Anon who says the Goldwater is under investigation. It’s more likely the gov. Just wants the ip addresses of those speak against Hebrews. Those are the hateful people. Group id doesn’t work ie. rich, poor, white, black, smart, dumb, pretty, ugly, vestites no matter your stripe. Once you realize that rights are for the individual and not the group you lose the hate.

Pretty silly, Franklin is in a mistmatched chair. If you look at the other chairs most are mismatch too, because its kids grabbing whatever chairs were available to them from their own homes. Charlie Brown is sitting next to his family members, and of course Peppermint Patty who sits next to him because she always had a "thing" for him even though she doesn't really show it romantically. Its a pretty complex dynamic if you look at it but it all makes sense. Marcie of course sits by herself since she is a bit of a loner.

Some look for things to turn into a racism charge. I watched this when it first came out, not one thought of racism occured to me.
I'm tired of the racists charges, it's an excuse to shut up people, when they don't even know the person! The Democrat Party just keeps this going rather than talking about lifting up all citizens!

To my English, forgive me am German makes happily speaks, because I, and to the English.

It is brings a matter to to your attention. I have a science-Proven magic petrification ray that is capable to change magic any young feminine person into a marble statue immediately with magic. I am has very excitied to this thing. I will tell you the story. I enjoy to turn of pretty young girls in statue. I turned ran five girls in statue with the device however I out of girl and need I more girl. Help me please to receive to more girl. It is very important service to the world girl in statue because to transform:

Girls who have been turned in statue can be used for decoration.
Rocky-girl transformed did not make overpopulate the world or use natural Betriebsmittel.
The girls hear stop aging and decaying if in statue.
Young feminine person lives eternally after statue.
Girl, when statue is nicer, than a girl as a meat -- only kidding! :)
Women, when statue can be naked in publicly naked, to how fleshy woman does not complain.
Woman think I when statue is prettier, than women while living woman, opinion lives.
Humanity as well likes statue.
Women and girl liked by people.
Combining you 8 and 9 (8+9) - women + statues = girl who is changed to statue with machine, best.
Woman doesn't have to make waste or must eat or must sleep after statue becomes.

THESE ARE CAUSE FOR WHY.

A. The body of girl changes of organic fleshy material into marble stone.
B. Woman cannot move.
C. Young feminine person is statue eternal.
D. Girl can think and can: girl mind awake and living to see, from SCIENCE.
E. Woman knows, is is herself that she statue, and aware all that happens.
F. I make statue feminine petrification statue happily.

WTF IS THIS LUNATIC TALKING ABOUT???