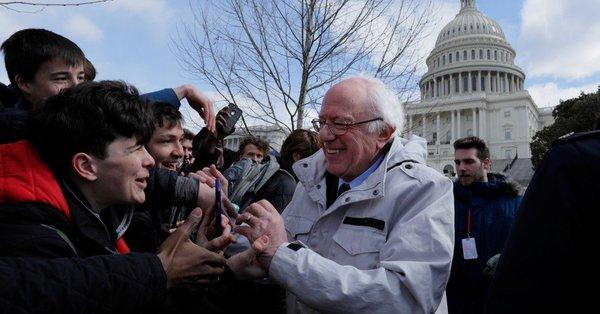 You might call him the never-say-die guy as old man Sen. Bernie Sanders is not about to give up on his presidential dreams. Sanders shared that he might run for president in 2020, after all, but that is if he turns out to be the “best candidate to beat President Trump.”


Sanders even threw a shade on Trump as he explained why and how he might give his previously dashed presidential ambitions another go. He said:”I’m not one of those sons of multimillionaires whose parents told them they were going to become president of the United States.”

Then the Democrat played it cool as he claimed: “I don’t wake up in the morning with any burning desire that I have to be president.”

He also said Trump’s challenger need not be him, while also essentially saying he’ll be just as ready if he turns out to be the best opponent to Trump’s reelection bid. Sanders added: “If there’s somebody else who appears who can, for whatever reason, do a better job than me, I’ll work my ass off to elect him or her. If it turns out that I am the best candidate to beat Donald Trump, then I will probably run.”

Sanders also admitted last week in another media interview that his team is looking at the possibility of a 2020 run for him. He also said that running for president is a personal decision that will impact on his family.

Sanders is of course coming off from a frustrating 2016 results for him when he ran in the Democratic primaries, gained popularity among so-called progressives, but eventually lost to former Secretary of State Hillary Clinton for the nomination. His supporters widely claimed after Hillary humiliatingly lost to Trump that good, old Bernie would have stood a better chance against Trump.

Social media users gave varied reactions to the possibility of Sanders running for President in 2020, even among Democrats.

I wish he would give it up already.

It's been plainly obvious that he's running for over a year, now. For all of our sake, I sincerely hope he wins the nomination. Millennials will stay home again if he doesn't, and Democrats can't win the White House without them.

God have mercy on our souls.