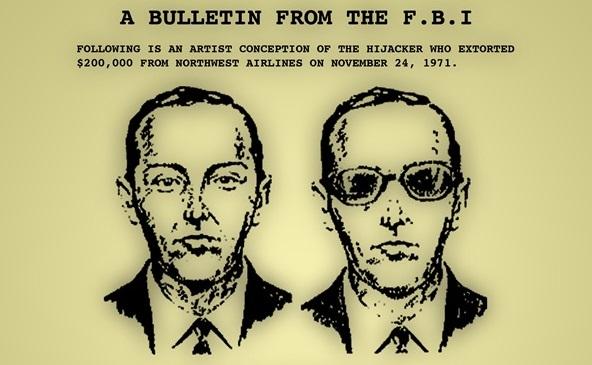 Little is known for sure about D.B. Cooper, the skyjacker who overtook a Boeing 727 November 24, 1971. 47 years later, but researchers captivated by the case met at Portland's Columbia Edgewater Country Club to share theories, attend lectures and buy and sell books. The conference featured several speakers including a parachuting expert and a forensic scientist who had recently analyzed the clip-on tie Cooper left on the plane.

Cooper disappeared out of the airplane that day with $200,000 in ransom money. Though he had given his name as "Dan Cooper" when purchasing the ticket, his real name is still a mystery. To this day, the crime is the only unsolved skyjacking case in US history. That, coupled with the large sum of money and the daring parachute escape has cemented the saga of D.B. Cooper as a true-to-life legend.

Theories regarding the case being an inside job, the work of rogue CIA agents or Vietnam vets or the possibility of an "extraction" team waiting on the ground has only fanned the fuels of interest in the intervening decades.

Speaking of theories, some of the more recent theories discussed at the event ranged towards the bizarre and conspiratorial. For instance, apparently, some cattle mutilations had occurred on the Washington state riverfront property where a portion of the ransom money was finally discovered in 1980. Then there's the 2013 murder of Earl Cossey who had claimed he owned and delivered the parachutes to the plane in Seattle. FBI agents had attempted to sabotage the delivery of ransom money and parachute so that agents could storm the plane.

Attendees included members of Tom Colbert's documentary investigative team who claimed that former paratrooper and alleged con man Robert Rackstraw was D.B. Cooper.
Rackstraw is currently retired and living in the San Diego region. Vern Jones, publisher of the memoir "D.B. Cooper & Me" made the claim that Walter Reca had been a long time spy for the US government before "becoming" D.B. Cooper.

The conference organizer, Eric Ulis, had yet another theory. According to him, WWII veteran and former Boeing employee Sheridan Peterson was, in fact, the real D.B. Cooper.

A US Army analyst, not in attendance, had also recently shared a theory regarding the true identity of D.B. Cooper. The Army officer is keeping his own identity a secret as he continues his research but had spoken with the Oregonian in regards to his theories earlier this month.

Tom Kaye, a spectroscopy expert did a forensic analysis of the clip-on tie, one of the few pieces of evidence left by "Cooper." He pointed out that micro-forensic analysis, though standard procedure today, was certainly not de riguer in the early 1970's when much of the current technology wasn't even in development, much less ready to deploy.

According to Kaye, "Cooper could have been out on the town with some floozy."