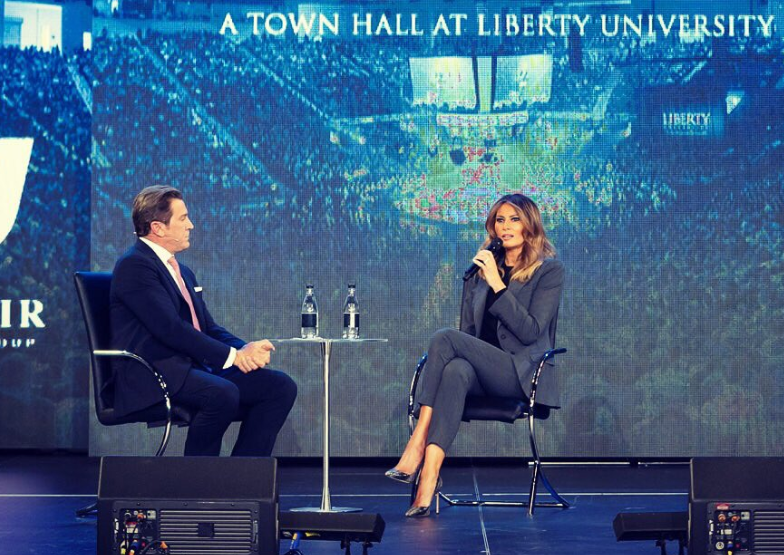 During a town hall that should have focused on the opioid epidemic, which FLOTUS called the "worst drug crisis in American history," Melania Trump laughingly countered the criticism that had emerged in the US mainstream media regarding her choice for ‘red’ Christmas trees in one hallway of the White House.

Giving a rare speech in a town hall meeting featuring participants like former Fox News star Eric Bolling, Demi Lovato's mother Dianna Hart and Homeland Security Secretary Kirstjen Nielsen, Melania Trump clearly was in a stellar mood as she jokingly discussed her much-mocked Christmas décor (some compared it to a scene from ‘The Handmaid’s Tale), which she stoutly defended.


Eric Bolling: “So here you are talking about opioids and getting the message out and what is the media, I tell you, I can’t believe this, the red Christmas trees in the White House.”

“Now, I will tell you on the flight over here, my wife said I want a red Christmas tree in my house now too. Are we kidding, this is what they worry about, when lives could be saved.”

Melania Trump: “We are in the 21st century and everybody has a different taste. I think they look fantastic.”

An entire hallway of RED Christmas trees is admittedly odd! But LQQK where they point - to the Tree honoring U.S. Military in a room by itself.

So many of our Patriots have given their lives for this nation - for us - for our liberty.

We must treasure them and pray for all military now deployed - at home and abroad.

Shows how petty and disgusting the liberal press has become.

In an earlier interview Melania said one room was decorated in blue, another in white, and the hallway in red. She should have made it clear; the theme depicts the American flag.

"You are all very welcome to visit the White House, the people’s house,” FLOTUS Melania Trump

It may also be a reference to the "Red Forest" in the Ukraine.