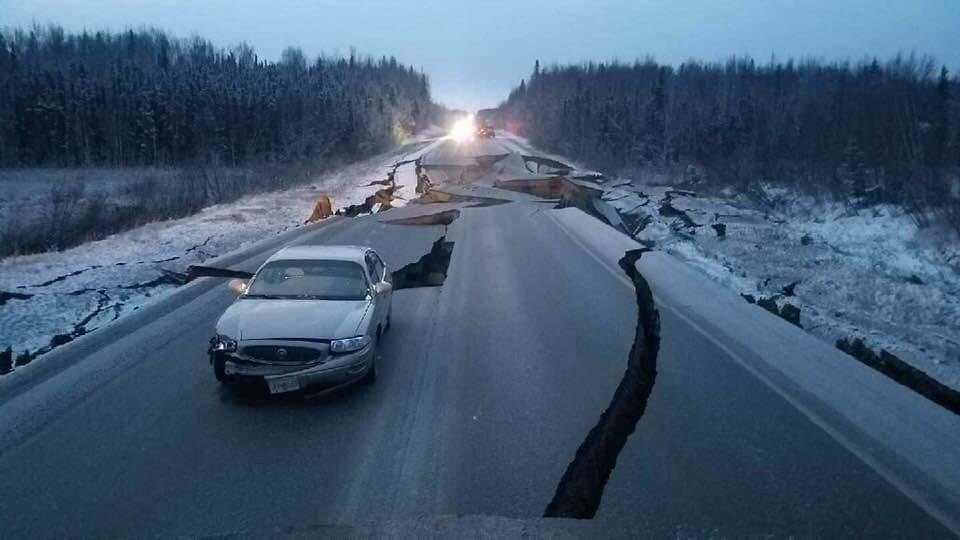 There's now a catastrophic tsunami warning gutting the Alaska coastline after a 6.6 magnitude earthquake has stunned the capital of downtown Anchorage.


"I could tell this was bigger than anything I'd been in before, and it wasn't going to stop," Alaska resident Philip Peterson said.

There was just a MONSTER earthquake in Anchorage. I was getting coffee in a store at the time. Here's the shelves. pic.twitter.com/SqERuX7FRH

The President has been briefed on the earthquake near Anchorage, Alaska, and is monitoring damage reports. We are praying for the safety of all Alaskans!


President Trump has been briefed on the Earthquake and possible Tsunami, with former Vice Presidential candidate Sarah Palin saying that her home is no longer intact.

🙏🏼 for Alaska. Our family is intact - house is not... I imagine that’s the case for many, many others. So thankful to be safe; praying for our state following the earthquake.


"[Pray] for Alaska. Our family is intact -- the house is not... I imagine that's the case for many, many others. So thankful to be safe; praying for our state following the earthquake," she said on her verified Twitter account.

A 7.0 earthquake that rocked Anchorage, Alaska caused a roadway near the Ted Stevens Anchorage International Airport to buckle and break apart. https://t.co/b0j5XMIQNL pic.twitter.com/xHbZsts8b1


Footage from Anchorage shows devastation with roadways destroyed, as residents of Alaska are in fear of a pending tsunami mid-winter.

🙏🏼 for Alaska. Our family is intact - house is not... I imagine that’s the case for many, many others. So thankful to be safe; praying for our state following the earthquake.


A tsunami warning is in effect for the coastal areas of Cook Inlet and the southern Kenai Peninsula. Expected arrival times are 9:25 AM in Kodiak, 9:30 AM in Seward and 11:45 AM in Homer.

State Of Alaska Division of Homeland Security and Emergency Management's Jeremy Zidek says there is no immediate threat to Anchorage. However, in the event of aftershocks, drop cover and hold on, he said, as aftershocks may be more powerful than the original earthquake.

"We must be vigilant in the next few days and months," he stated. "Drop, cover and hold on."


We're sending our thoughts and prayers to all affected by the devastating earthquake, and those under threat from the tsunami warning.

This is a breaking story that will be updated as time allows for more information.

Tips? Info? Send me a message!
~Send Me An E-Mail!
—[email protected]
Follow The Entire Goldwater Team via Twitter!
RedPillForAll
RedPillTheEarth
@Styrian0ak
@PoliticallyRYT
@WhitePill
@steve_dellar
@MAGASyndicate
@kafkaguy
@TheGoldWaterUS
Follow Me On Gab!
@IWillRedPillYou
Be Sure To Share Our Articles, Freedom of Speech is Under Attack!
The Goldwater