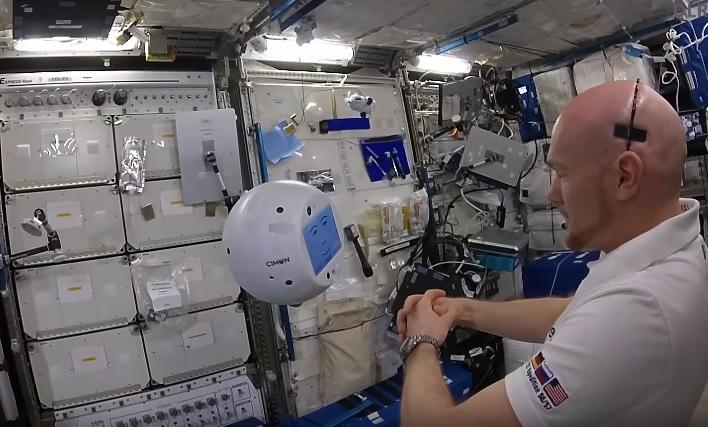 The video debut of the new floating robot sent to the International Space Station for testing didn't quite go as planned. The AI-powered robot named CIMON is able to float due to the lack of gravity at the ISS and uses several air jets to navigate. But its unique form of navigation isn't its only ability, the robot is designed to act as both a companion for astronauts and a tech support assistant.

The robot's name, CIMON, stands for "Crew Interactive MObile companioN" and it is the first of its kind to make the journey to space and take part in an ISS mission. The basketball-sized, spherical robot was built by Airbus and cost a whopping $6 million to create under a contracted awarded by the German Aerospace Center. The project's goal is to see if an artificially intelligent robot can actually provide useful aid that could improve crew efficiency and improve morale on longer missions. Robots like CIMON will likely accompany astronauts on longer missions such as humanity's planned trip to the red planet.

Despite not having any appendages like Star Wars' rolling droid BB-8, CIMON still boasts some AI-powered intellect and a natural-language user interface. CIMON was created using 3D printing and is able to navigate using 12 internal fans. The robot can also display instructions on its screen, record video, play music and even search for missing items.

The Goldwater first reported on CIMON when it successfully reached the ISS earlier this year in June. Now, the European Space Agency has released its first footage of CIMON in action in a debut that featured some, well let's just say bugs. The video goes well at first, German astronaut Alexander Gerst is leading the video introduction to CIMON by asking some basic questions.

Everything seems to be going smoothly as NASA astronaut Serena Auñón-Chancellor looks on in the background. CIMON successfully tells the astronauts his name, where he is from, and even demonstrates some emotive expression by tilting its "head". CIMON then helps the astronauts out with a scientific procedure before playing Gerst's favorite song Kraftwerk’s "Man-Machine".

That is where the demonstration starts to go wrong. Around four minutes into the video, CIMON starts to act a bit peculiar. Things go from bad to worse as CIMON refuses to move past music mode accusing CIMON of not being nice. CIMON even asks Gerst to stop being so mean! It is a surreal scene, like something from a futuristic space film like "2001: A Space Odyssey".

Around this point, Gerst and the other astronaut share a glance that clearly demonstrates they were not expecting CIMON to be so touchy. CIMON continues his tantrum asking the astronauts, "Don't you like it here with me?" as it sinks to the floor. Then, as if it has the memory of a goldfish, CIMON then asks when it's time for lunch. Twitter users were quick to mock CIMON's debut with one user tweeting, "Last picture was taken from this astronaut before he was murdered by Cimon, the evil ball of doom."

Last picture taken from this austronaut before he was mudered by Cimon, the evil ball of doom. #iss #nasa #cimon pic.twitter.com/PWLLo7v2pj


It may not have been the most successful debut, but it clearly showed us a bizarre window into the transition that is happening at the forefront of AI technology. Robots are coming, they will soon be part of our everyday lives, and they are here to stay.

Shit it reminds me of that evil bastard from the WALL-E cartoon movie that controlled the humans spacecraft.