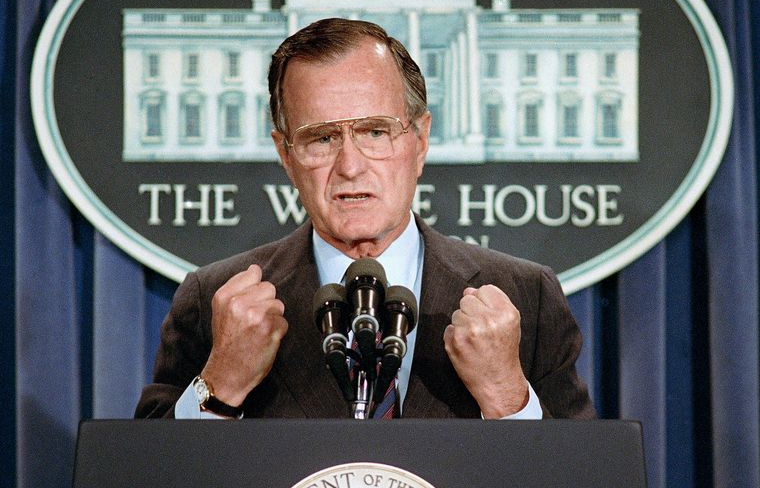 Did Bush Prepare US For Trump Presidency?

The mainstream media had a mostly mixed reaction to the passing of former president George H. W. Bush. The posthumous portraits of the major newspapers portrayed him as the last representative of a kinder political era, whilst the leftwing media points out how the cynical aspects of his political career laid the foundations of the current Trump Presidency.

Both views on the presidency of George H. W. Bush are true: it was the end, but also the beginning of an era.
Yes, he was the last representative of a class who saw the public cause as an honorable job. He had more in common with Franklin D. Roosevelt and Dwight D. Eisenhower than with Bill Clinton or Donald Trump, as his biographer Jon Meacham said.

And thus, Bush is set to receive the same tribute as Arizona Senator John McCain earlier this year, as a man of the old guard who as one of the few politically active Republicans, opposed the current president who went to the party’s more populist base.

But Bush will also be reminded for his less attractive traits.

The most symbolic is the name of Willie Horton, an African-American prisoner in Massachusetts who broke into a house in 1988 during a temporary leave from prison, stabbed a man and raped his girlfriend.

Bush used the case in a campaign to attack his Democratic opponent Michael Dukakis, governor of Massachusetts. "At the end of our campaign, people will think Willie Horton is the running mate of Dukakis," said Bush's notorious campaign director, Lee Atwater.

It was the archetype of a racist 'dog whistle': without saying it explicitly, the commercial stimulated latent racist gut feelings with the age-old American archetype of the African-American man as a rapist.

Although Bush put the accusations of racism beside him as 'absolutely ridiculous', his fellow Republicans saw this differently. "You and George Bush will carry this up to the grave," Roger Stone told Atwater. "It's a racist commercial. You will regret it. "

Atwater offered his apologies for the commercial on his deathbed. Bush never did.
Three decades later and Bush slams Trump for using racist and xenophobic ads versus Central American immigrants in the Midterm elections.

Perot is now seen as a sort of early ‘Trumpian’ candidate with his economic nationalism and aversion to the American political system. Bush was perhaps the anti-Trump, but as a classic Republican he was also a pioneer for Trump.

This only shows ideological partiality and obscure interests as to the future of the nation.

The US is so fortunate that Donald Trump so timely arrived on the political scene. The pent-up animus against the accelerating democrat socialist infiltration of our education system and social fabric was at dangerous levels. The silent majority was gaining pent up energy and that's what propelled Trump to his victory. The crowds that greeted his on election trail was a sure sign. Now we see so many us in the middle "not so sure" position joining the nationalist movement. President Trump has an agenda between his ears and I have a feeling that we have only seen the preliminaries. Hang on as we take back our country from the "Rules for Radicals" democrats. Also, keep a keen eye out for President's potential successor. We will really need another one in 6 years.

His son sealed the deal on that fateful day in September. I remember as if I saw it just a minute ago.

A phone was handed to him as he read a book to a kindergarten class. He was only on the phone a second or two...

Not anywhere near long enough to explain what was goin on, sure it could of been for an emergency debriefing, yet he would of been on the phone a tad longer. There was also no look of surprise or worry on his face. It was more a knowing nod than a reaction to what was happening...

Think about it. He was on the phone long enough to only hear a few words. His eyes squinted a bit, his head nodded up & down as his jaws clenched. To me that grimaced look said ok it has been done.


In my opinion the words he heard on the other end of the phone where much the same. "It`s been done" or something equally short.