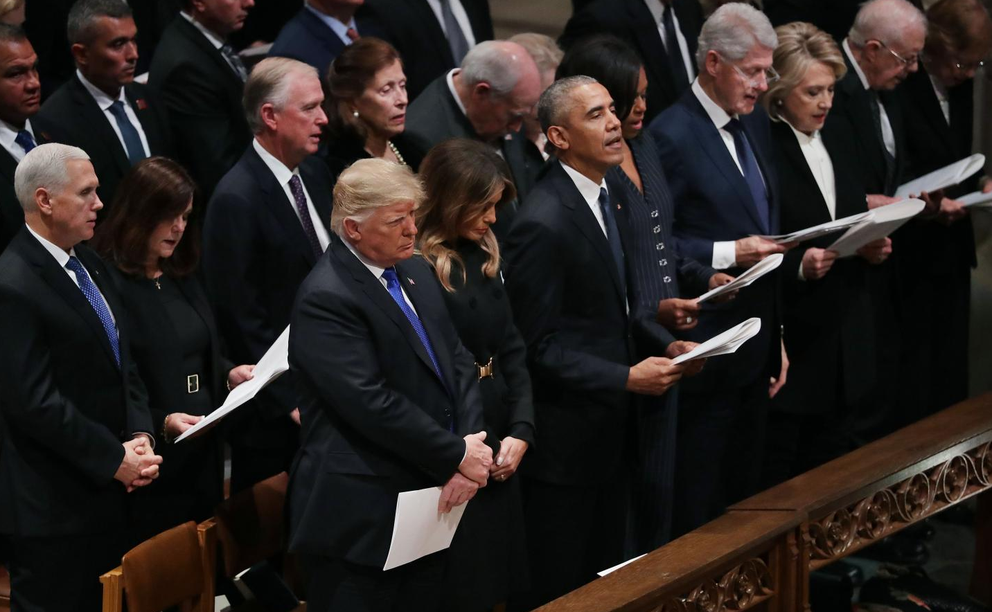 US television networks had hired a lip reader as well as a body language expert to reveal what was said during the funeral of former President Bush and what the body language of the several presidential couples revealed.

Expert lip reader Larry Wenig and body language interpreter Dr. Lillian Glass gave their opinions as to how the chemistry between the current and former presidential couples was as they sat next to each other at the funeral of 41.

The funeral took place at the National Cathedral in Washington and was attended by some three thousand people. A whole row in front was reserved for all successors to George H.W. Bush and their wives and they were all there.

Trump shook hands with the Obamas but not the Clintons at George HW Bush's funeral. pic.twitter.com/YtzFJupgOn


They were nicely seated next to each other: Rosalynn and Jimmy Carter, Hillary and Bill Clinton, Michelle and Barack Obama and lastly, Melania and Donald Trump.

The experts looked at the images and gave their opinions. Firstly, both of them agreed that Michelle Obama and Hillary Clinton were especially good friends. The Democrat couples, the Clintons and the Obamas were especially talkative at first. But the chatter came to a halt when the current President and First Lady arrived.


The chatty group of couples went silent President Trump and his wife Melania were seated alongside them. They were greeted with a simple "good morning” and no small talk.

Body language expert Dr. Lillian Glass said especially President Obama was "very tense" when communicating with President Trump, whilst she added that the former president "has a very phony smile where his lips are pursed, his eyes are not crinkling."

She also claims that "Michelle has a phony smile" as she shook hands with the president, saying, "Her eyes are not crinkling and her eyes are tense."

Ms Michelle Obama acknowledge in her recent biography that when it became clear in 2016, Mr Trump would become America’s next President, she reacted in shock and "tried to block it all out."

A few rows away, Chelsea Clinton and Ivanka Trump sat side by side, but they were too far away for the lip reader to be able to say what they were telling each other.

There was also a nice moment between President George W. Bush and Michelle Obama. When the coffin entered the church with the family and Bush greeted his colleagues, he gave Michelle Obama something. What that was exactly is not known, but American media speak of a piece of candy. Bush would have done that before, during the funeral of Senator John McCain.

There was also a tender moment between the Bush brothers, just after George W. had given his eulogy for his father. When seated again next to wife Laura, brother Jeb patted him on the knee: "that testifies to the good relationship they have," says Dr Glass.

Yup! The outsider won and now they worry because all the guards they left in place to keep the secrets are removed from power. Get some popcorn honey, the shows about to begin!!!

Mike and Barcrock look like they are uncomfortable? Maybe they both have a case of jock itch? Mike has a hog leg taped tight to his leg and it probably gets sweaty and nasty from all the ass action it sees.

That's OK. I don't expect the Obama's to best buddies with the Trumps. They probably don't even like each other and that's OK too. But, they were polite and cordial. That's acceptable behavior.

if they ALL weren't phonies they wouldn't be at the funeral of a head 9/11 terrorist.

look at the body language of that frightened obama leaning as far away from trump as he can get while shaking his hand. lol.....

look at the 9/11 mastermind monster glaring at Trump.

I dont see any Jews glaring at Trump?? Participant deepstate stooges maybe, but not masterminds. Clintons killed more people than that.

Clickbait bullshit article. A paragraph worth of nothing

The funny thing was seeing Whitaker's bald head shining above the rest right behind the Clintons and Obamas. Cheney was slinking around like the Grinch that stole Christmas.

The calm before the storm was an understatement! WWG1WGA!