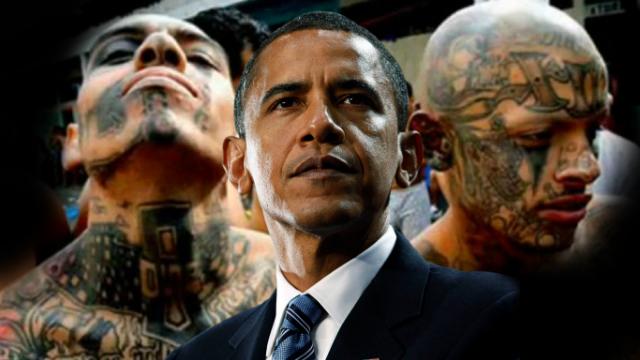 The U.S. Border Patrol recently released a video showing two small children being dropped from the top of the 18-foot border wall at the U.S./Mexico border. It isn't just child smugglers getting into America, it was also reported two days ago that an MS-13 gang member was arrested by the CBP along with five other illegal immigrants on their way to Los Angeles.


Stops like these prove that MS-13 gang members such as "Perverso", an illegal alien released by a just appointed by Obama. The reality is, there is a high cost to illegal immigration and a 17-year-old teen paid the ultimate price when Perverso murdered him shortly after his release.

The judge in Perverso's case, whose real name is Henri Salvador Gutierrez, a 19-year-old Salvadoran who entered the country illegally, was appointed as a federal immigration judge by President Obama's attorney general, Loretta Lynch. The judge is named Mario Sturla and he was appointed in September 2016. One ironic fact linking judge Mario Sturla and Gutierrez is that they are both immigrants, with Sturla being a native of the Dominican Republic.

Sturla graduated in 2003 and went on to earn a law degree at Yeshiva University in 2006. In June of this year, the 19-year-old who went by his gang nickname, "Perverso" found himself before Judge Sturla. The judge heard of how Gutierrez had been arrested three times since entering the United States illegally in 2014. Homeland Security even testified that they believed that Gutierrez was determined "to be a risk to public safety as a verified and active member of the MS-13 gang in the Boston metro area."

This does not seem to faze Judge Sturla and in a shocking move, he turned "Perverso" free saying, "Lastly, the court finds that the respondent has made attempts to rehabilitate himself after multiple arrests for carrying knives and machetes. The respondent testified that he wants to live a peaceful life." It was not long before Gutierrez was wrapped back up in his gang activity and there was no "peaceful life".

An affidavit from just weeks after his release states that he and five of his MS-13 gang members stabbed a 17-year-old Herson Rivas to do death because they believed he had informed to the police. The federal criminal affidavit reads, "The nature and circumstances of the (charges) are troubling and horrific." One of the attackers stabbed Rivas "with such force his knife became warped during the attack."

The affidavit confirms that four of the six defendants are believed to have been living in the U.S. illegally and had visible MS-13 tattoos. U.S. Attorney in Boston Andrew E. Lelling said, "MS-13 is a ruthless, transnational gang operating in our backyard." We cannot let our borders become overrun and free range for anyone and everybody who wants to come here. Immigration should be on a merit-based system and done legally.

It was later revealed that a member of the MS-13 gang who was also charged with the murder of Rivas said that an accomplice bragged repeatedly about stabbing him "as if he were a cow". All of the suspects have now been caught and charged with murdering Rivas. Harold H. Shaw, Special Agent in Charge of the FBI Boston Division, said in a statement:

"The murder of 17-year old Herson Rivas is another sobering example of the savagery of MS-13, the ruthlessness of its members, and the utter disregard they have for law and order, our communities, and the opportunities afforded to them while here in the United States. This barbaric behavior cannot and will not be tolerated, and law enforcement at all levels will continue to use all available resources, aggressively exploit all available intelligence, and work as one integrated team with the sole intention of preventing additional murders or future acts of violence."

is it a rumor that Obama wanted to be a border guard ... he is so talented as a speaker , they love him ... Obama could of leaded an shown the way . nah....even at a funeral a chin up kinda guy .. never stood up while the President came into the room... oh way that normal for a funeral that no rise is normal~? is that to picky for not sure . Obama could oflead by example oh but think he was a desk jockey... often wonder how a seldom know person could of go in so quickly and that goes for Canada young 2nd gen Trudeau +(which as a kid was in the media as a up and become prime minister when old enough..) but O.. that is slippery stuff... soros or not still slippery ... you know even in wiki pedia bill clnt paid money for gw jr to get in as pres.. since the pardons from the O of same kinda people as with in this report l.. will the public understand what WE THE PEOPLE could mean.... ?we the people allow this or what ?? in one way the allowing has happened over and over and over for decades .. the youth may just be numbed out by now.? and aged slowly going away.. the birth boom downward . thus the influx of ~? pretty people and sympathy ..remind me of the staving Africans massive campaign on tv while the youth ate a meal for ma and pa after long day working , wanted quiet to eat their meal... and Africa just don't share the wealth , so along comes a guy that got cuddly with the wealthy and never even needed to use his real name... thank you for your update ,fair and to point , and clean .. but since several video of mass grave have been posted in yt .. fema stuff ~~ possibly not but with highly developed ground penetrating radar.. wow .. how long have they know where the bodies are. and why fema and others and media kind a float around like a butterfly over golden fields of daffodils... since have noted to correct ones.. and do research in many fields and sub a few wonderful sites.. oh yeah.. it is probably time some get questioning what were those caskets filled with.. surely Obama should help the children at any site. ....sorry the gang stuff is petty ,for leaders use just about anything to control . school system same newspapers same ...serious stuff intimidation but cumulatively you got more pull when people utilize what ever WE the PEOPLE means.. so you await the j j or t or putin ... been there done that but solos have less chance than masses... we the people what does that mean... how can that be of some guidance with no fight involved. bets some journalists would of liked some help . seth is alive and j a is fine... right steve... hey i already am more than willing to be witness to the casket fields that were covered over.... and white house is in yt. and cia which are really good ones.. help those that are doing the very best .at this very second... your are grown up right.......

These MS13 fucktards should be moved into Obamas mansion!

Anyone have any idea how many killers he has pardoned as well as obummer?


I couldn`t say anything but f~it. These peeps want free thinking, non-thugs DEAD.


If it is morally wrong they are for it.


If it is morally right they are against it.


If you dare to want America to be great again, they want you DEAD.

Gods Revolution, woe be it those who oppose our peaceful revolution. For if they mean to make it violent. The true Patriots will come out. We know how to love God, our Country & our Countrymen.

Fear is for those whom serve wickedness. Nasty peeps cast off the hate, pain & worse. The LIGHT will reward you. The miserable only want company.


There is no reason acceptable to willfully harm. We all have some inner spark of good. Even the most vile. Yet many of our leaders (worldwide) choose time & time again to side with nefarious forces.


One & ALL my heartfelt utmost prayer is for the Christ Conscience to grow uncontrollably in all.

Hey would you mind stating which blog platform you're working with?
I'm planning to start my own blog in the near future but I'm
having a hard time making a decision between BlogEngine/Wordpress/B2evolution and Drupal.
The reason I ask is because your layout seems different then most blogs and I'm
looking for something unique. P.S My apologies for getting
off-topic but I had to ask!