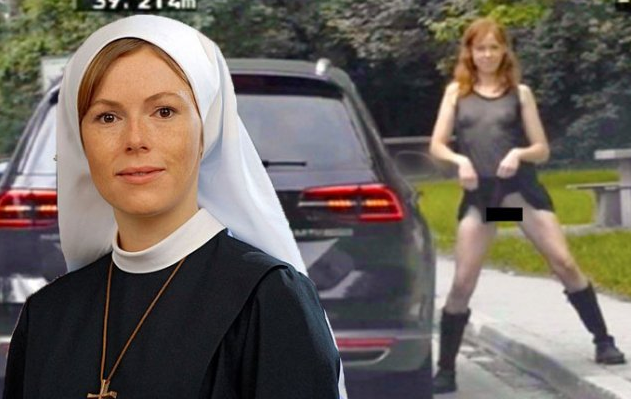 The German actress and self-proclaimed exhibitionist Antje Mönning is ordered to pay a fine for ‘indecent exposure’ and a ‘public sex offense’. The woman had performed a striptease dance in mid-June for some unknown men in a public parking lot. What she did not know, however, is that the men were police officers in civilian clothes.

The men filmed the striptease and filed a complaint.


Mönning stopped on the 18th of June 2018 around 10:30 am in a public parking in Germany, where she exposed herself to a few men she did not know. The civilian agents were at that moment acting on a traffic violation made by a trucker in the parking lot, but the actress and comedian did not notice anything.


The actress refused to pay a first fine of 1,200 euros for the infringement and was allowed to defend herself on Tuesday in court.

As the actress listened, she heard the testimonies of the agents who, in their own words, were bothered by the show they she was putting on in the parking lot: "Just a cheap sex movie," one of the police officers said.

According to the men, they then just searched the internet for the identity of Mönning. The trucker - who got a ticket at the time - stated, however, that he enjoyed the dance. "She is not unattractive," he told the judge. "If you are a real man, you just look!"

Ms Mönning finds the whole ordeal rather ridiculous and says there is nothing wrong with a naked woman. "We all come naked into the world", the TV nun stated.

"Should we therefore denounce God?"

She apologized to the agents because she "did not know they were working". It was not her intention to ridicule them, but it had to be "funny".

The judge ruled that Mönning was guilty of a public sex offense and sentenced her to a fine of 300 euros. However, the actress is not going to stop her "crazy deeds".

She admits that she knew that her breasts and her body would sooner or later cause problems, but she has a solution for this, saying: "Naughty, naughty boobs!"

She'll be wearing a burka soon...

I think she wants something

Looks like she was hungry and in need. I would have fed her ass some meat.

I would of donkey punched her fart box