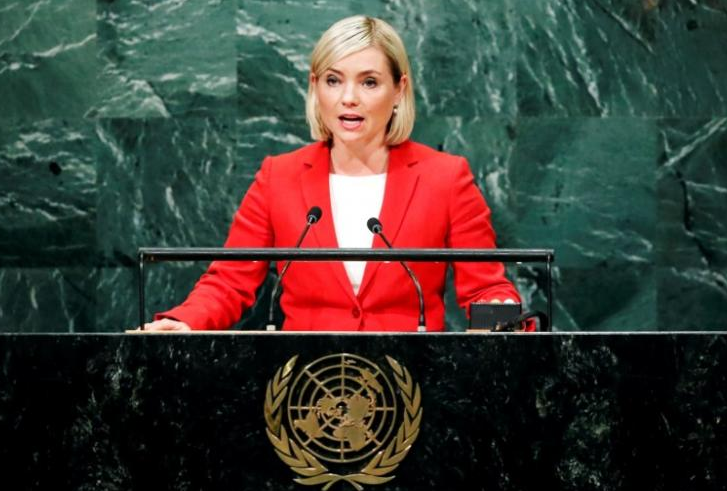 Iceland is in the midst of a bizarre political scandal after a person working in a Reykjavik bar overheard several opposition politicians discuss various female members of parliament and their ‘looks.’ The barman recorded the conversation on his phone and leaked the recording.

The scandal is named Klausturgate, as it was taped in a bar called Klaustur, which is near the Icelandic parliament.
Most discussed was current Culture and Education Minister Ms Lilja Alfredsdottir who with her pale skin and blond hair looks very Nordic indeed.


The six politicians involved in the discussion, five men and one woman, all thought that Ms Alfredsdottir was ‘using others’ to gain power, but on one thing all the men agreed on: they all agreed in the audio, which has spread like wildfire in Iceland, that they would gladly have sex with her if the offer ever presented itself.
Current Culture minister Ms Alfredsdottir appeared on national TV yesterday and was asked about the scandal which has captured the Icelandic nation for weeks now.

She said: “I experience this as violence.”


“They are thugs. I’m telling you this is quite clear in my mind. … I just couldn’t believe it. That men could speak in this manner, and I underline that this is definitely violence.”

She said that none of the men have called her, and furthermore stated that their decision to continue being members of Parliament “shows disrespect. I don’t think they grasp the seriousness of the situation. I believe that strong individuals would have shown regret, would have shouldered responsibility for what was said.”

“When I saw the picture, I was startled. I found it uncomfortable to see his face. That’s when I realized that I had been viciously attacked. I will not accept this. That’s why I have also appeared here [for the interview]. Many people have wanted to discuss this matter with me. I just want to make it perfectly clear that this behavior of theirs is unacceptable. We do not want Icelandic society to be like this. This is also for the country’s daughters and mothers. We don’t want to read this about somebody.”

“Let’s take that bitch down” Gunnar Bragi said about Lilja Alfredsdottir minister of culture and education. Sigmundur David then added she could not be trusted “she plays men like only women are capable of” stating she used her looks to get ahead in politics. pic.twitter.com/ckqtv6ERii


A poll shows that 80% of Icelanders believes that the six politicians should resign, including the woman who participated in the discussions.

The young lady, while she may have been the subject of rather ribald discussion, is a bit over-the-top in calling what the Parliamentary members said "violence". Was it inappropriate? Yes. Was it hurtful when she found out? Sure; but violent? Not a chance. No harm was done to her save for her pride. Oh, and by the way, what right did that bartender have to record someone's private conversation and then put it out in public? I don't know about Iceland, but here in America, even the police can't do that without a court order. Iceland, it seems, has become a Nation Under Surveillance.

What exactly is the scandal?
a) What they said.
b) The illegal recording of what someone says.

SLANDER IS VIOLENCE. VERBAL ABUSE IS VIOLENCE. THERE ARE MANY FORMS OF VIOLENCE, PHYSICAL MENTAL EMOTION VERBAL VIOLENCE. AND PUBLIC MEANS PUBLIC YOU CAN RECOED OR PHOTOGRAPH ANYTHING THAT IS IN A PUBLIC SPACE. THEY SHOULD ALL LOSE THEIR POSITIONS IMMEDIATELY. THOSE POSITIONS SHOULD ONLY BE HELD BY PEOPLE WITH PROFESSIONAL BEHAVIOR AND ESPECT, AND RESPONSIBILITY FOR THOSE POSITIONS. GOVERNING IS TO IMPORTANT FOR THIS KIND OF SHIT. SEXUALLY OBSESSED IMMATURITY, PEOPLE ARE SICK!!! GROW THE FUCK UP!!!

All I see is that these types of men cant get their brains out of their penis. They are stuck in teenage mentality and cant function as mature adults. Even just in a simple conversation they cannot keep their hands out of their pants. Pathetic.

For Christ sake just about any group of drunk straight guys will at some point agree about the fuckability of some decent looking woman. She takes the comment as an act of violence?!?!?! She lost my vote for fuckability with that comment as it proved she's a thin skinned snowflake that needs a safe spot. Now the barkeep recording a private conversation and dumping it online gets him the Dick of the week award and hopefully hurts his bottom line with a huge reduction of patrons.