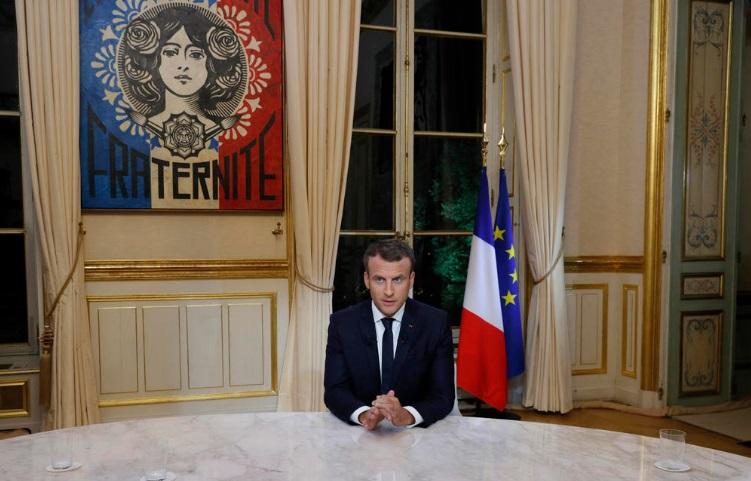 It took an immense police force and armored vehicles, but extreme violence was mostly absent on Saturday in Paris. It was not as dramatic as last week when the Arc de Triomphe was trashed and the head of a statue of Marianne, the symbol of France, was broken. That is about all the gains President Emmanuel Macron has made though.

But the anger remains. Because it is much deeper than dissatisfaction about the increase of an ecotax on fuel. If the president had immediately sensed that this tax would be perceived as very wrong, he might have been able to prevent the riots in Paris. But the angered French would have probably put on their yellow vests with a next unwelcome measure.

The 'Gilets Jaunes' have seized on the rise in fuel taxation to make themselves visible. President Macron, just as his predecessors Holland and Sarkozy, had not seen noticed that for years the gap between the French with a small salary and the city elite grew ever larger.

What began as a protest against higher fuel taxes has turned into a revolt against the president https://t.co/mm10mtQTtP

Those who could no longer pay a house in the city and ended up in medium-sized places, where there is less employment and where it is difficult at the end of the month, versus the French in the city who are unaware of those problems and are more concerned about the end of the world and ecological issues.

The eco-tax on fuel made this break clear, because the French 'from the periphery', which really need a car, noticed that life was getting hard. The insistence with which the government stated that diesel drivers should simply buy a cleaner car (and would even get a premium for it) made it clear that the two worlds are very far apart.

President Macron alone cannot be blamed for the gap that has arisen. Factories closed and caused unemployment whilst the law of supply and demand resulted in ever higher house prices in metropolitan areas. All this is because globalization is an irreversible process.

But this head of state did not realize that his ecological measures made the gap even bigger.

Dissatisfaction of the middle class

Such a gap is not easy to close. Rural areas must be given a boost to enable the lower middle class to join in again.
President Macron should get rid of the idea that the economy revolves around metropolitan areas. But that is a process of years, while he is now being asked for concrete and immediate measures.

With a government debt of almost 100 percent of national wealth, he has little room for maneuvering.

The streets of Paris were filled with thousands of protesters again on Saturday, in what has become French President Emmanuel Macron's biggest challenge as demonstrations grow more intense.https://t.co/tqAOsGpBgu

Moreover, he does not insist on raising the minimum wage or reintroducing the tax on wealth, a measure requested by the yellow vests.

He will speak one of these days. Finally, because he showed little interest in the last three weeks that the protests flared up. He will have to come up with a clear solution showing that he is more than a technocrat.

Outside the country's borders, his reaction is also eagerly awaited because the man who presented himself as the new leader of Europe cannot be seen to be so unpopular in his own country. If he doesn’t solve this issue, Mr Macron will lose his international credibility

As proven again, Socialist Leadership is willing to kill, starve, tax into poverty and inflect harm on its own to fund itself. Despite the very Citizenry that allows them power objecting.

The next usual step is for the failing Socialist Government/Leadership to find excuses to halt or tightly control elections. Like who can run, who can vote, Which parties are permitted, and once elected how they must vote.) and/or just declare Dictatorship Law.

OFF WITH HIS HEAD!

It is expensive feeding, housing, and covering for the invaders. Pretty soon all the normal residents will be dead or moved away and the place will look like Syria or Deerborn MI.

ALL ORCHESTRATED BY YOUR LOCAL GLOBALIST EU AND THEIR AGENDA TO RUN THE MASSES INTO THE GROUND OF POVERTY AND DEATH TO CONTROL YOUR VERY LIVES AND ENRICH THEIR OWN!!! THE FORMATION OF THE EU IS A FARCE AND A HOAX. A STEPPING STONE TO BRUSSELS NWO AND OWNERSHIP OF YOUR VERY LIVES LIKE CATTLE. DISSOLVE THE EU AND TAKE CONTROL OF THEM AND YOUR OWN LIVES!!! #FREXIT FREXIT FREXIT #KILL GLOBALISM #SOVEREIGN NATIONALISM

THE GOD DAMNED SPOON FED WILL NEVER COMPREHEND THE SWEAT OF A WORKING MANS BROW OR HIS STRUGGLE. THEY HAVE NO DAMN BUSINESS RUNNING A NATION!!! THEY WILL ALWAYS CONSPIRE AGAINST THE COMMON MAN AND FILL THEIR OWN POCKETS!!! THERE ARE AND FEW RARE EXCEPTIONS TO THE RULE!!!

SILVER SPOONS ARE ALL THEY HAVE CAPACITY TO UNDERSTAND. GIVE ME GIVE ME GIVE ME!!! THEY HAVE NO BACK BONE NOR INTEGRITY. THEY WOULD DIE IN THE FIELDS AND WITHER NEATH THE SUN. THEY HAVE NO GRIT AND THEY KNOW IT. SO THEY EMBRACE POWER AND VILOLENCE BY ANOTHER 'S HAND OF COURSE, TO PROVE THEMSELVES MEN. WORTHLESS!!!

Saved as a favorite, I like your web site!