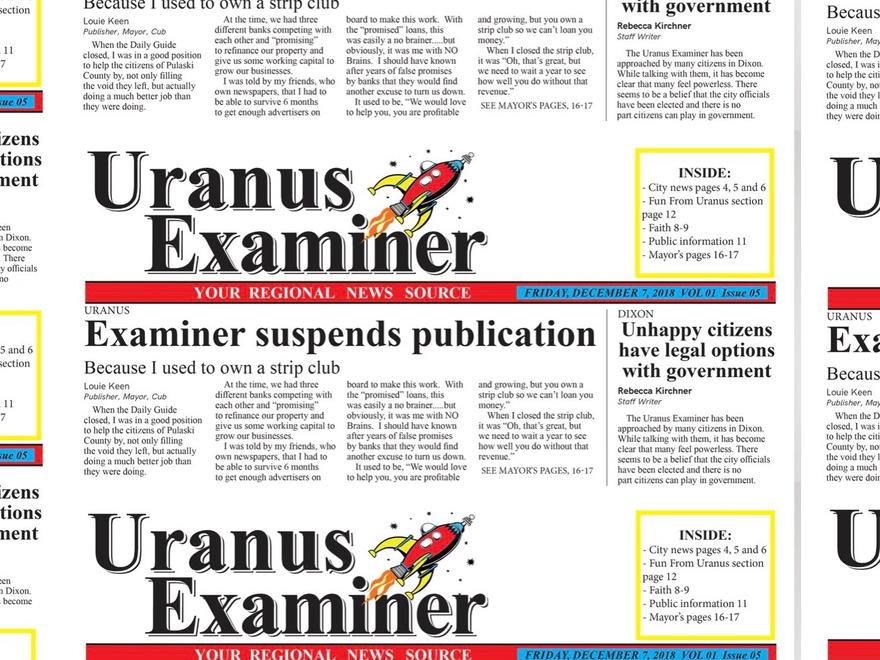 A local Missouri newspaper, published in the town of Uranus and therefore named the ‘Uranus Examiner’ is ending it’s publication run after only three months when it admitted having a hard time finding advertisers.

Already at the start of the publication, back in September of this year, the newspapers was met with ridicule and a rival news publisher, run by Mr Darrell Todd Maurina, said the name was so hard to stomach, it “does not indicate a serious newspaper”.

Even the town’s mayor, Mr Luge Hardman, threatened with a boycott at the time, stating: “No. I’m sorry. But the innuendo of that title puts my city up for public ridicule, and I will not be a part of it.”


Despite the criticism from local authorities, the paper’s managing editor, Ms Natalie Sanders, believed the name had a good ring to it and wanted to stick to it, saying: “We had thought about constitution, but most of the people who love us, and who were part of coming up with the name, liked the examiner better.”

By now the criticism had gone and the inhabitants of Uranus had gotten used to, and, according to the editors, even came to appreciate the publication. There was only one problem left that made the owners decide to throw in the towel: advertisers didn’t want to be associated with the newspaper.

Natalie Sanders and Louie Keen, chief editor and publisher of the newspaper respectively, attribute it to the narrowmindedness of the towns’ residents and companies in Uranus.

According to the media duo, the population appreciated the publication, but banks did not want to give credit to the newspaper and neither did advertising companies, partly also because Mr Keen had once owned a strip club.

The Uranus Examiner has ceased publication, forced out of circulation by prudish Missourians who didn't know our English word, 'Uranus', is the transliteration of the Greek word, 'ouranos', which is translated as 'Heaven' 268 times in the King James Version of the Holy Bible. pic.twitter.com/2ZLVRhP4ki

Apart from the name, Uranus in Pulaski County is not very striking. It is located along Route 66 and the 'most famous' attraction is the world's largest belt buckle.

The town has become known less as a town than a series of extended puns. Their tourism website states that “there’s a lot to do in and around Uranus”, and local sites include a fudge factory and a competitive axe-throwing facility called the Axehole.

The mayors name! Luge Hardman! In Uranus no less!

Time to get to the bottom of that indeed....

Your source has misgendered the Waynesville mayor. Hardman is a woman. They issued a correction, go figure.