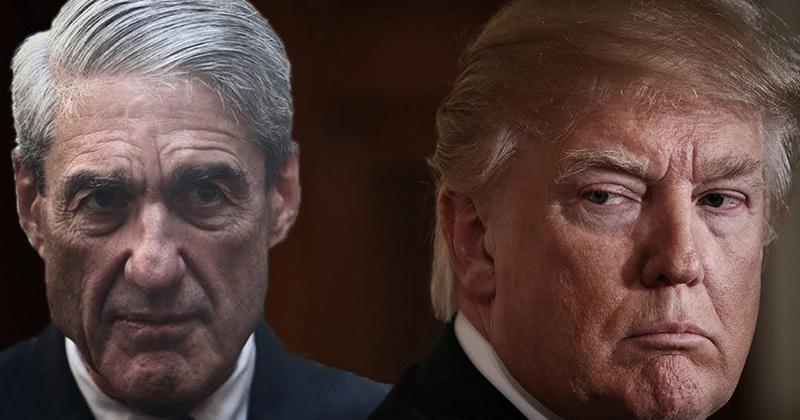 Robert Mueller Lied To The Court By Withholding Exculpatory Evidence to Exonerate Trump!

Robert Mueller has withheld evidence from the court that would exonerate President Trump from the latest accusations of Russian collusion during the 2016 election, according to a new report by journalist Paul Sperry.

Will he face the same punishment he is recommending for Trump associates?

Robert Mueller, the dirty cop, lied to the court!

Mueller’s plea deal with Michael Cohen offers further evidence that the Trump campaign did not collude with Russians during the 2016 election.

Cohen pleaded guilty to making false Statements to the Senate as discussions about the so-called Moscow Project continued 5 months longer in 2016 than Cohen had initially stated under oath.

A nine-page charging document filed with the plea deal shows that Mueller is using the Moscow tower talks to connect Trump to Russia. But congressional investigators with House and Senate committees involved say that Mueller withheld, from the court, details that would exonerate the president.

On page 7 of the statement of criminal information filed against Cohen, Mueller mentions that Cohen tried to email Putin’s office two times in 2016. But Mueller omitted the fact that Cohen did not have any direct points of contact at the Kremlin.

Sources who have seen these additional emails point out that this omitted information undercuts the idea of a “back channel” and thus the special counsel's collusion case.

Page 2 holds additional exculpatory evidence for Trump, sources say. It quotes an August 2017 letter from Cohen to the Senate intelligence committee in which he states that Trump “was never in contact with anyone about this [Moscow Project] proposal other than me.”

This section of Cohen’s written testimony, unlike other parts, is not disputed as false by Mueller, which sources say means prosecutors have tested its veracity through corroborating sources and found it to be accurate.

Mueller did not challenge Cohen’s statement that he “ultimately determined that the proposal was not feasible and never agreed to make a trip to Russia.”

“Though Cohen may have lied to Congress about the dates, it's clear from personal messages he sent in 2015 & 2016 that the Trump Organization did not have formal lines of communication set up with Putin’s office/Kremlin during the campaign. There was no secret ‘back channel”.

For more on this story, read here.

When will this end? If they can sentence General Flynn, who did nothing but was pressured into admitting to lying to the FBI, the FBI that has been proven to lie to our country, then why won’t they sentence Mueller for his obvious lies to the court?

MULEFACE NEEDS TO HANG FOR TREASON!!!

It was ALL a setup.
Lock Obama's ass up!
& the Clintons too!

Robert Mueller is a two bit criminal, a globalist traitor who belongs in prison with his scumbag buddy Rosenstein. His only reasons for being the special counsel which is a big joke is for money and to destroy the United States. No wonder why the FBI looks more like the KGB thanks to traders like him? This hole collusion scam against Trump is a big joke. Mueller is the one who should be investigated. Why hasn't Trump fired him and rosenstein? Why has he appointed Barr, a known establishment crook as attorney general. Trump continues to look more like that traitor George Bush senior every day. No wonder why he can't get anything accomplished, half his cabinet are liberal scum or deep state traitors.

How much do you want to bet that the yellow vest rioting comes to the USA? Everyone knows how this investigation was set-up and I would venture to postulate that Mueller, Schiff, Obama, Comey, Clintons or any of the other players ousted don't live long if they pursue the reckless course their trying to advance. Just my educated guess.

Lexy, I am going to withhold judgment on Mueller until I see real evidence. It is my hope that Mueller is honoring his oath as a Marine and has undertaken a mission at the direction of the President of the United States, whom he has sworn to obey!

SOMETIMES I THINK THAT ITS LIKE THAT OLD SAYING. KEEP YOUR FRIENDS CLOSE AND YOUR ENEMIES CLOSER. I THINK MANY TIMES HE HAS APPOINTED THOSE WHOM HE INTENDS TO ENSNARE. IT GIVES THE IMPRESSION THAT HE DOESNT KNOW WHAT HE IS DOING TO THE OTHER SIDE SO THEIR DEFENSES ARE LESS GUARDED. WE HAVE TO REMEMBER MANY INVESTIGATIONS ARE REOPENED NOW AND THEY HAVE TO BE KEPT DISTRACTED AND FOCUSED ELSEWHERE WHILE BUISINESS IS GETTING TAKEN CARE OF BEHIND THE SCENES. [RESIDENT TRUMP HAS NT LESS US DOWN AT ALL. HE HAS PROTECTED US, IS FIGHTING FOR US, AND HAS SUFFERED ENDLESS ATTACKS FOR US. NO PRESIDENT HAS EVER FACED THE KIND OF ASSAULTS THAT HAVE BEEN INFLICTED ON HIM. EVER. THAT RIGHT THERE IS PROOF OF WHICH SIDE HE STANDS. OURS. IF NOT FOR HIM, WE WOULD BE IN FRANCES SHOES RIGHT NOW. I BELIEVE THINGS ARE GETTING DONE. IF NOT FOR HIM, HILLARY WOULD HVE OPENED THE FLOODGATES ON THE SOUTHERN BORDER. GOD BLESS AND PROTECT HIM AND HIS FAMILY.

IF MUELLER IS GATHERING EVIDENCES FOR THE CONSERVATIVE DEFENSE, THEN HE IS NOT DOING IT BECAUSE OF HIS OATH AS A MARINE, BUT TO SAVE HIS OWN ASS WITH A DEAL. IF HE WERE GOING TO UPHOLD HIS OATH HE WOULD HAVE DONE SO THROUGHOUT HIS HISTORY IN DC. UNLESS BEING BLACKMAILED WHICH I HEAR IS A TREND, THEN IT MAY BE HE IS ACTUALLY FIGHTING TO REGAIN CONTROL OF HIS VERY LIFE. WHICHEVER, LETS HOPE HE COMES OUT WITH THE KILLSWITCH THAT WILL DROP THE WICKED IN THEIR TRACKS.

Lexi stay on top of all this mess and untangle it piece by piece! You and Paul, Dan Bongino and others have worked so hard at getting the truth out. Be careful!

Mueller is as DEEP STATE as they come.... he has consistently been involved in cover-ups and corruption during 9/11 and throughout Hillary and Obama’s administration. Anyone who believes he is impartial is more than kidding themselves... plain ignorance.

Mueller is as DEEP STATE as they come.... he has consistently been involved in cover-ups and corruption during 9/11 and throughout Hillary and Obama’s administration. Anyone who believes he is impartial is more than kidding themselves... plain ignorance.

I just don’t understand how these crooked people keep getting away with all this crap. It’s time they were held accountable.