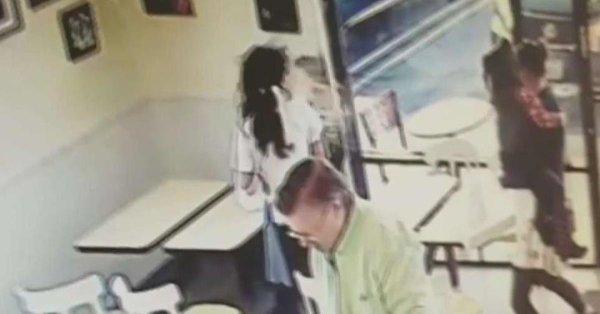 A homeless woman was inside a local donut shop in Canoga Park when she was asked to leave by the store owner. A confrontation ensued and the irate woman threw hot coffee at the owner.


The violent incident happened on Friday morning at the Spudnuts Donuts in Canoga Park.

Owner Cindy Seam said: “Just being loud. Scaring the little girl. And that’s what concerned me.”

The homeless woman, it turned out, is no stranger to Seam or to the shop as she comes to the store from time to time. Seam shares that the woman did not pose any serious problem or cause trouble in the past, but she got concerned once the little girl started getting scared of the woman.

The hot-coffee throwing shocked Seam, and now she’s thinking of taking drastic measures to avoid similar incidents from happening again in the future. She admits she will now be more “selective”’ about her “open-door policy” toward the homeless.

Seam has already filed a police report about the incident. The homeless woman has yet to be found, however.

In the meantime, Seam says she wants to see some changes implemented as regards to the handling of the homeless situation, insisting that the homeless should still be given “compassion.”

Seams said: “I think like people are talking about it and tired of it but we can’t do anything about it. It feels like we have fewer rights than they do.”

Given the number mentally ill bums being called Homeless for PC reasons vs. True homeless due $$$$ issues fires , evictions. Why don't we develop a better PC identifier for those needing help that want to be part of soceity?