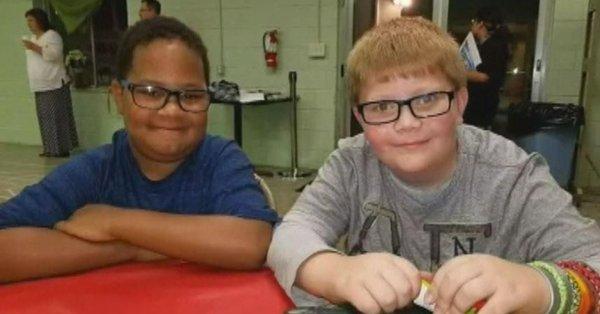 He is only 12 years old but a boy from Michigan already exhibits a heart of gold and an admirable sense of love and loyalty to his departed best friend. The boy is working on various odd jobs when he could just be relaxing at home, watching television or fidgeting with his gadgets. Instead, he is raking leaves, collecting bottles, and others to earn money to afford a headstone for his best friend who succumbed to leukemia and its complications earlier this year.


Kenneth “K.J.” Gross and Kaleb Klakulak, both 12, were the best of friends since second grade. Nothing could keep them apart, it seems, except one that is beyond their control, the death of the other.

K.J. was diagnosed with leukemia since he was an infant. He fought to survive and endured multiple surgeries and treatments. Sadly, the boy died on May 1 of congestive heart failure. Kaleb stayed by his bedside until his last moments on earth.

K.J. was buried in a family plot. His mother, LaSondra “San” Singleton, however, cannot yet afford a headstone which costs around $2,500. And so, even if he has already done a lot for his departed best friend, Kaleb wanted to do more and ease the worries of his buddy’s mom.

Kaleb said he also loves his best friend’s mother and feels sad that she couldn’t afford the headstone. He added: “I wanted people to be able to find K.J.’s grave when they went to see him.

With the help of his own mother, Kristy Jo Hall, Kaleb, aside from taking on odd jobs to earn for the benefit of K.J’s headstone, also set up a Paypal account and posted it on social media.

In just a short time, through Paypal donations and cash, Kaleb already raised $900, and has given the amount to K.J.’s mom. He looks forward to completing his target before Christmas so his best friend could finally have his gravestone.

K.J.’s mom is beyond touched, and said K.J. lives through Kaleb now, and that the two kids were brought in friendship by God.

That kid a great American. We’re consistently producing the most generous people on the planet

This breaks and melts my heart

It looks like they made their goal... but that kid is what we all need to be.

Kaleb Klakulak you are going to be one fine young man. I am so sad that you lost your friend but be assured he is resting with the angels. You are a true friend and he was lucky to have known you.