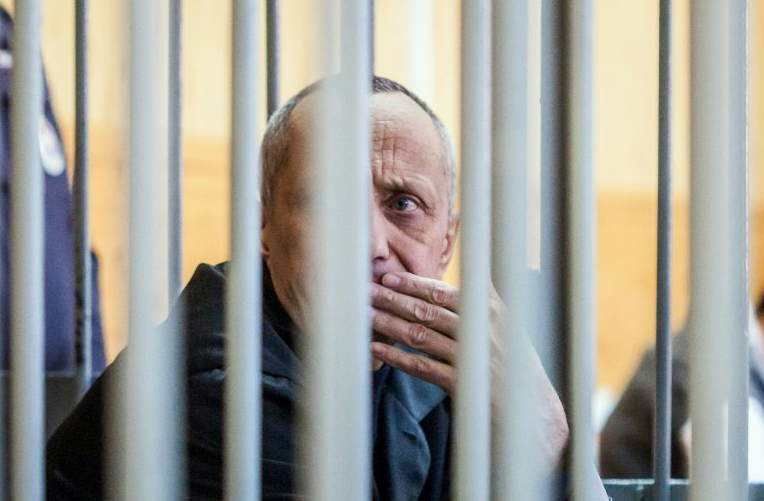 A former Russian policeman has today been convicted for 56 additional murders between 1992 and 2007. Mr Mikhail Popkov, the ‘Werewolf’ was imprisoned for the murder and rape of 22 women already.

Afterwards he confessed to other facts. Today’s conviction turns him into the worst serial killer in the modern history of Russia.

Popkov killed for a period of 18 years, between 1992 and 2010. He thought of himself as a 'cleanser' and set out on the streets of Angarsk (Siberia).

"I wanted to cleanse my city from prostitutes," he explained afterwards. "They left their husbands and children at home and went to party as if it were the last day of their lives."

Most of his victims, however, were not sex workers, but family women with families. One of them was a teacher in the music school of his daughter Katya.

Russian serial killer Mikhail Popkov stands inside a cage in court in Irkutsk. He murdered 78 women - targeting those who were drunk or living in a way he saw as immoralhttps://t.co/qOkdZ5cYP6 pic.twitter.com/TqXZcHODrN

In an interview, he once explained that he was looking for his victims in restaurants and nightclubs, where he went in as a policeman in uniform beyond his usual hours. He spoke to women who were either drunk or doing things which he felt were ‘morally reprehensible’ acts and offered them a ‘safe ride home,’ mostly in his service vehicle.

But whoever got into the car found that something completely different was waiting for them.

He drove his victims to various abandoned places where he would rape and kill them with a hammer, an ax, a knife or even a screwdriver. Sometimes he had sex with the corpses afterwards.

He then left behind the naked and dismembered bodies so that they would be found. In the media, this quickly earned him the nickname 'the Werewolf'.

Because he was a decent policeman and a devoted family man on the surface, Popkov succeeded at remaining beyond any suspicion.

Even when he retired in 1998 from law enforcement, he continued murdering.

The police systematically ignored any evidence that indicated the serial killer would be someone from within their own ranks.

Once, in 1997, a victim was able to get away from one of his attacks. He had taken Svetlana M. to a forest where she was forced to undress.

She managed to hit him in the head with a tree stump and escape, but the wife of Popkov gave him an alibi for the evening and the local police officers chose to believe her instead.

He himself stated afterwards that he was not afraid that he would ever be caught. "I always worked the same way. I was in complete control and realized that it was not so creepy at all. I also attacked only women who behaved as if they did not care where we were going and who only thought about partying."

Popkov was finally captured in 2012 thanks to a search involving 3,500 police officers.

They all drove with the same type of car whose traces were found at the scene of the crimes. His DNA matched with genetic material that was found on some of the victims.

Later he accompanied the investigators to the places where some of the murders happened and he showed them where the bodies were buried.

He himself declared that he killed because he suspected his wife Elena of adultery. It was remarkable that he was looking for women who looked like his mother. She would have mistreated him in his youth. "He is a murderous maniac and has an uncontrollable urge to kill," said researcher Yevgeny Kerchevsky. "Despite his personality disorder, he was judged that he is not mentally ill and that he is responsible for his crimes."

Popkov was finally convicted in 2015 for 22 of the murder cases of which he was accused.

In one of the cases he had decapitated a woman, in another, he cut the heart from a woman’s chest. Then last year, he confessed to another 59 murders.

"He mentioned the places where the bodies were buried. We looked them up and checked whether it is true what he says," explained detective Andrei Bunayev.

the corrupt cops could have had this guy in prison long ago BUT PROTECTED "ONE OF THEIR OWN".

Its Russia, everything is harder over there, including proving a cop is a killer apparently