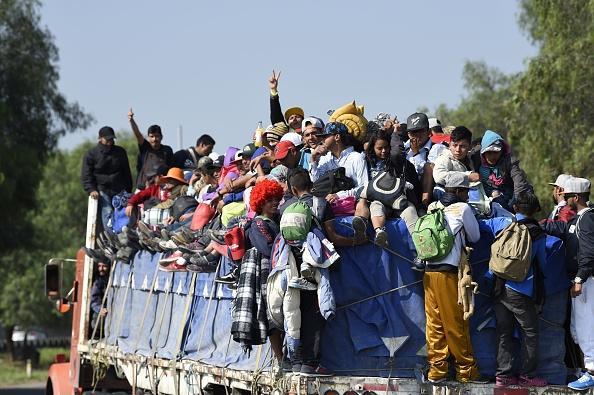 The Caravan invasion of migrants towards the United States has been believed since day one to be a controlled and heavily-financed globalist ploy. Now, the so-called “migrants” are demanding that President Donald Trump pay them each $50,000 to leave.

This attempted blackmail only proves the “radicals of the right” correct, showing that these people are lowlife invaders.

The absurd and outright ludicrous demands of the migrants must be broadcast for the nation to see so that the people of this country can ascertain that this was never about seeking refuge.

Two separate groups of blackmailing migrants marched into the US consulate in Tijuana with the heavy-handed ultimatum, according to Fox News.

The options they've presented are that the United States allow them entry, or to pay them $50,000 to go home.

They'll get neither, and still be denied entry.

An underlying point remains that the mainstream corporate media told us that these were “desperate” people, wanting to come into America to find gainful employment.

Neither is true, proven by their own actions of demanding payment to stop being a nuisance to an already overtaxed and under-budgeted America.

As per their demands, the migrant caravan claims they've ordered President Trump to comply with their demand within 72 hours.

We've also seen reports of the security along the US Border including resources needed to prevent the invasion are beginning to stretch thin.

As a battle begins to rage on Capitol Hill to determine the future of President Trump's likely make or break plan to shut down the government if Democrats don't agree to finance the border wall.

President Trump has continued to work with Democrats, in some cases drawing criticism from hard-line right-wing voters for his decision. The overwhelming majority of Trump's base agrees that if a border wall isn't built, Trump will suffer in the 2020 elections.

To ramp up turnout for 2020, the President no doubt needs his promised wall to be scratched or the long list of things to do.

Americans have seen the light, with even many moderate Democrats noticing that the migrant invasion was a well-coordinated effort.

President Trump says that the migrants aren't getting a dime, and if they enter the United States of America they'll be immediately arrested and deported.

Trump is RIGHT build a wall this caravan already asking for demands!!!!!!!!!! What right or rights do they have to demand anything !!!!!!!!! When did they start paying taxes??????? If they want demands go back to their countries and make demands!!!!! Take back their own countries!!!!!!!!! No one in USA asked for them to come!!

50k and we would have people swimming to Hawaii!
5.45x29 was super cheap a few years back, 119 for a spam can was the price back then.

Uh... ever heard of the word extortion? Its a criminal offence. These terrorist, I said TERRORIST, thugs need to be locked up and the key thrown away. Who the f*** do these mongrel low life scum think they are??? Speaking of scum... Are they ever going to do anything about the pus bag, hell bound, maggot faced, SOROS??? All these GD pedo pukes and manipulators, need to be strung up!!! BRING BACK THE DEATH PENALTY!!!

Demorats build the damn wall. You dont care about the blacks slaves that built this country. The 14th amendment for the slaves desendent for citizenship we black american dont care build the fuc...ing w all.