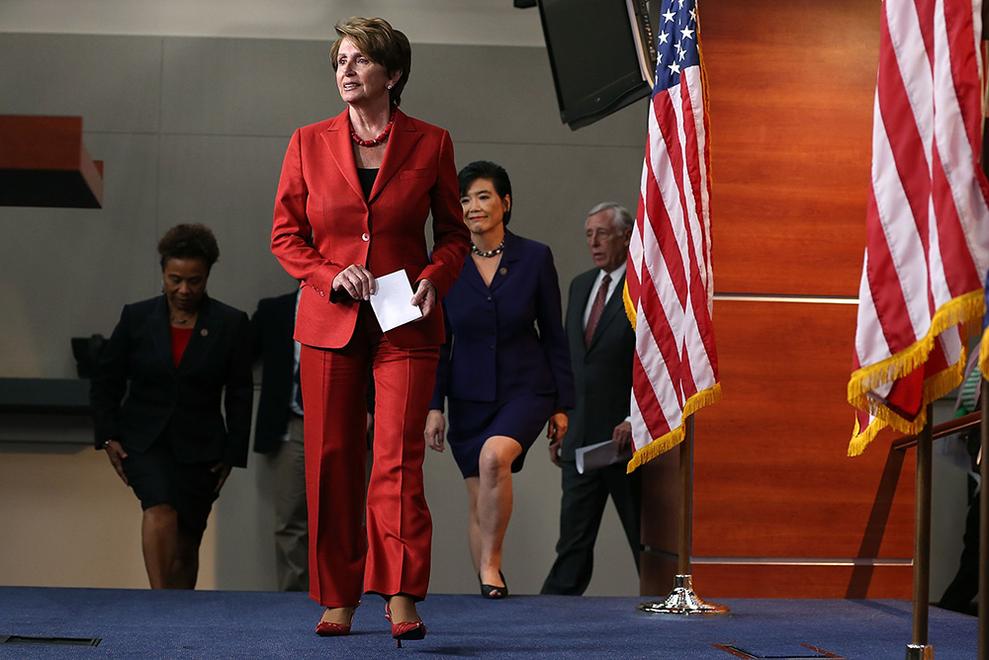 House Minority Leader of the House of Representatives, Nancy Pelosi, has made crystal clear that President Trump's threats to shut down the government in order to build a border wall won't matter.

Pelosi predicts the government will stay "closed forever" because she is never going to fund the border wall.

Earlier, Pelosi said she is not going to approve one dime for the Wall. pic.twitter.com/W1hDuOtikw


Pelosi said she will “never fund” Trump's campaign promise of a border wall, suggesting that Republicans will inevitably back down in the end.

The longest government shutdown in American history took place during a 21-day span from 1995 to 1996.

During the shutdown, approximately 800,000 federal employees were indefinitely furloughed, and another 1.3 million were required to report to work without known payment dates.

Liberal “Resistance” groups have praised Pelosi as some form of “hero,” based solely in her mindset of preventing President Trump from building the wall his voters supported.

A projected image of Pelosi leaving the White House as it explodes was displayed on the side of the San Francisco Federal Building, with the leftist mainstream media giving her praise as well.

The traitorous Fox News also gave Pelosi praise, further distinguishing the Rupert Murdoch-owned media outlet as being out of touch with the Republican base.

Americans are growing increasingly weary with both parties, who continue to finance the interests of foreign governments and a multitude of other causes that don't benefit the domestic society of the United States of America.

President Trump's efforts to convince Democrats to finance his border wall are going to be an uphill plight, with a shutdown of the government looming in the not so distant horizon.

well, BOOM SHAKALAKA GRAMMA!...
i love it that she's putting her reputation and those of her ...ahem, cohorts (the lunatic leftists) on the line....
BRING IT GRAMMA NAN, BRING IT!

Well let’s hope the President lays-off those non-essential persons in the shut down so they don’t get their salary when and if they do have a job when it is over.

Someone is lying. We do need transparency. Unrestricted immigration in Europe has been a disaster. I would like to raise the issue in the House, to see if Donald's prediction is correct. If a separate funding bill passes there, go to the Senate where it's on the Democrats to be bi-partisan. If a funding bill is passed in the Senate, fine. Otherwise, a shutdown should follow, and we will know who to blame.

Could you imagine a government worker getting unemployment ins. instead of full pay for their time off. That way you could legally reduce the size of the federal gov.

When Federal govt workers are laid off during a govt. Shutdown they receive their full pay when they return. Thus, all a shutdown does is give millions of Federal workers a paid Holiday!!

Not if they are layed-off like normal private sector employees. If services can be resume through the elimination of waste or excess personnel, the wonderful use of automation could leave those unfortunate to be layed off six months for having to file for an extension like normal people. Would put reality in the public sector. There is no union for federal employees.

Remember seniority has no place in non-essential services.

To bad the demonRAT party couldn't be deamed none essential.

well that's going to be a damn problem for you old girl.... i'm looking forward to congress doing NOTHING!