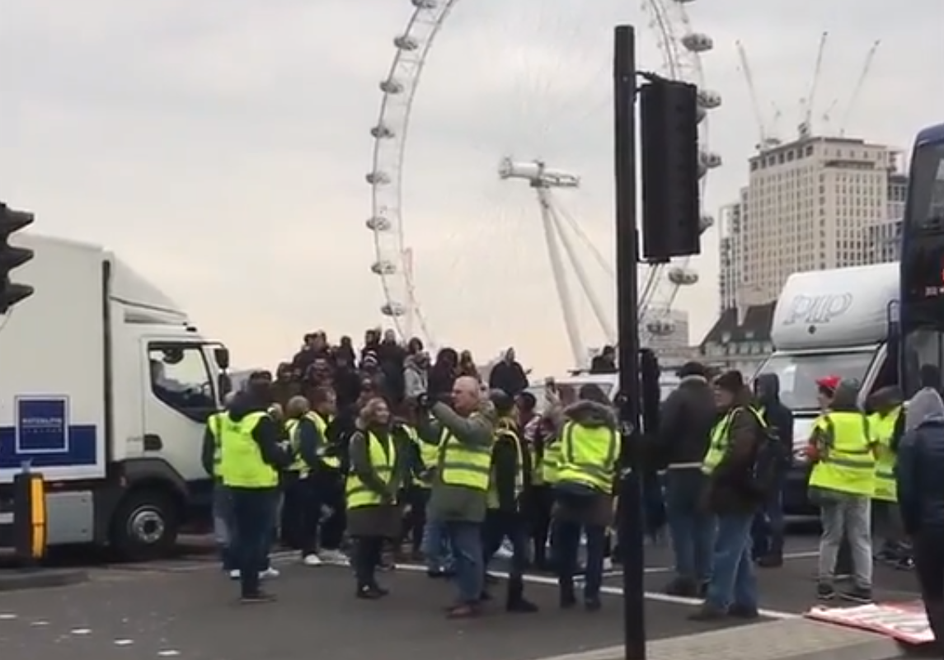 A small group of some 40 to 60 ‘Yellow vest’ protesters, dressed in similar fashion to the ones seen in France over the past three weeks, have this morning started blocking London’s famous Westminster Bridge.

The group, which hosted a live stream via the Facebook page 'Fighting for Justice' featured people shouting 'Brexit now!'

The group also called for UK Prime Minister Theresa May to resign and claimed that "we need a new mayor of London," referring to the left-wing Labour politician Sadiq Khan who is blamed for the crime wave in the capital city.

A spokesperson for the London Metropolitan Police said they were aware of the protest and added there were no arrests so far. Two protesters were also filmed holding up a Union Jack on the bridge.

London transport admitted the protests and advised their travellers that: "Buses serving routes via Westminster Bridge Road may be delayed because of a demonstration which is blocking the road."

The events took place as British PM Theresa May is holding crunch talks with EU leaders in Brussels to try and improve the ‘Withdrawal Agreement.’

Decide What You Want

Over in Brussels, several European leaders voiced their discontent with the UK’s uncertainty over the Brexit negotiations. Lithuanian president Grybauskaite said on Twitter that it was time for the British parliament to finally decide what they wanted and that Santa Claus would then certainly deliver.


Several other European leaders also complained about the mess the British have left. The Prime Minister of Luxemburg claimed that the British were in shambled because of a “referendum based on a lie” for which other countries will have to pay a heavy price.

"Our British friends need to say what they want instead of asking us to say what we want."


Most eagerly awaited was the reaction of Irish PM Leo Varadkar to see whether he would agree to change the plans for the ‘backstop’ border between his nation and Northern Ireland, which belongs to Britain.