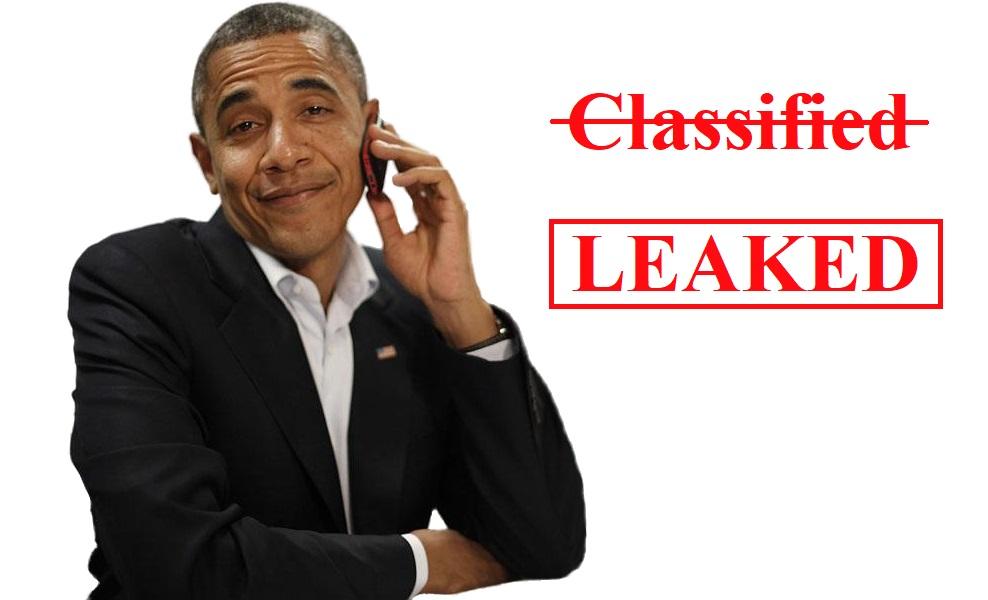 When then President-Elect Trump was about to be inaugurated, members of the State Department under the Obama administration were urgently providing "Russiagate" documents to State Senators. Judicial Watch released two sets of documents obtained from the State Department through the Freedom of Information Act that are heavily redacted but were distributed to several U.S. Senators by the Obama Administration.

The documents were disseminated as a direct attempt to undermine Trump's presidency and among those Senators who received the documents are Sen. Mark Warner (D-VA), Sen. Ben Cardin (D-MD), and Sen. Robert Corker (R-TN). The documents were obtained through a June 2018 Freedom of Information Act (FOIA) filed against the State Department when it failed to respond to a 2018 request regarding the Obama State Department's efforts to share classified information about Russia election interference with Democratic Senator Ben Cardin. You can see Judicial Watch's latest video recap of the last week below:

Thank goodness for Judicial Watch; they are doing a great service to the American people by not letting criminals in positions of power get away with their crimes and keeping a watchful eye on the judicial system and the U.S. government as the people should. Ultimately, it is the people whose blood, sweat, and tears, built this country and the government is supposed to work for us. Anything less would be a direct compromise to the values this nation was founded on.

Obama administration's nefarious deeds in the weeks and days leading up to Trump's inauguration are now coming to light. The newly obtained and highly redacted documents reveal that the State Department was gathering classified Russia investigation information and giving it to members of Congress within hours of Donald Trump being sworn into office. According to Judicial Watch:

In a Thursday, January 5, 2017, email chain then-State Department Congressional Advisor Hera Abassi indicates that then-Assistant Secretary of State for European and Eurasian Affairs Victoria Nuland’s bureau was attempting to get Russian investigation related documents to the office of Senator Mark Warner (D-VA) office as quickly as possible. (In June 2016 Nuland permitted a meeting between Steele and the FBI’s legal attaché in Rome. Nuland told CBS News that the State Department knew about the Steele dossier by July 2016.)

In the email, with the subject line "For Immediate Review – Call Sheet for S Call with Senator Warner," Abassi writes:

“I told Cardin's folks … that the process is long. Can we ensure that there are no holdups on our end?"

Minutes later, Abassi confirms that Nuland was fully aware of the information that the State Department was providing to members of Congress alleging Russia interference information:

"This is definitely on EUR A/S radar!"

"FYI – so we can keep the SECRET/NOFORN header, and should declassify it 25 years from tomorrow.

"I forwarded the fully cleared version to the two of you on the high side [Editor’s Note: "high side" is State Department term for high-security classification system], but let me know if there’s anything else you need from me on this.

"Note: we’ll need to make sure there is someone in Senate security tomorrow who can accept these."

On Wednesday, January 18, 2017, Johnson confirms that classified documents were sent to Senator Corker in addition to Senator Cardin. "Flagging that I sent you a high side request for clearance of the draft transmittal letter to send documents to Senators Corker and Cardin."

I don't think the government should be allowed to redact information at all from these types of documents. When it comes to redacting, the excuse given is always to "protect agents in the field" or to keep the identities of those involved protected. Yet, when the FBI conducts an investigation and gets a criminal conviction, they release all of the information relating to the case including the phone numbers, and addresses of those who cooperated in the investigation. The latest example was in the Chris Watts triple murder case, the Colorado man who killed his whole family.

When the trial concluded, FBI recordings were released of interviews with voluntary witnesses cooperating with the investigation. These interviews included full names, phone numbers, addresses, and in some cases even social security numbers. I have listened to these interviews and heard first hand how the government does not protect the people, even the good ones without whom they would never have solved their case.

The fact that all of the documents released as a result of these FISA applications are heavily redacted is unacceptable. There is a clear bias when it comes to those with the power protecting their own, and not protecting the stupid sheep citizens.

BS. Criminals getting away with Crime while the Mueller is locking up people if you fart in the first interview but not in the second one

I HOPE THEY USE THE QUILLOTINE. THAT WOULD BE FITTING POETIC JUSTICE FOR HUSSEIN!

Obama learned a lot from GW Bush, once you become president you no longer can get into trouble for illegal acts.

Charge the grey(not all white, not all black) for his crimes and strip him of his secret service detail. Let's see where he lives next.