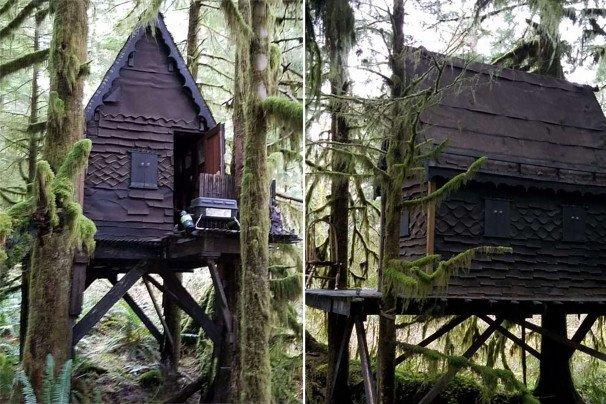 The horrible man who was busted for a double infraction- keeping a child pornography stash in his illegally built “fairy” treehouse on federal land has been sentenced to nine months in prison last week.


The pedophile’s illegal activities were first discovered after a US Department of Natural Resources employee heard rumors circulating in the hiking community about a cabin that was illegally built in the Snoqualmie National forest. The site is about 50 miles east of Seattle.The federal employee tried to do some sleuthing himself by looking for the rumored cabin five times in 2016 but was unsuccessful in his attempts.

But the employee proved to be one resolute soul. He finally found the treehouse in question that same year and the rumors proved true, after all. The employee found shocking framed images of child pornography mounted on the walls, including a montage of five huge photos posted across a bed.

The employee decided to take some photos and brought them to the King of County Sheriff’s Office and that really started the investigation rolling.

The property has a porch surrounding the home and also features a ladder that hung around 8 feet off the ground. The FBI searched the property last year and also found dozens of photos of young girls plastered all over the walls.

The FBI agents also took several items that contained DNA samples and fingerprints that later matched that of then-suspect Wood’s.

One sheriff’s detective even described the cabin as “an elaborate treehouse that resembled a fairy or gingerbread house.”

Part of Wood’s sentence is a prohibition for him to have contact with children without supervision for a period spanning 10 years. He must also register as a sex offender and must undergo sexual deviancy treatment.

Social media users gave their reactions on the update, with expressing relief that Wood was caught, while others are questioning why he got a relatively lighter penalty considering his crime.

Caught him before he could branch out

How is that possible? Jared from Subway got like 15 years in prison

These devenerates will never stop with kight sentences like 9 months. They need to be pit down as the monsters they are. If he gets out, I bet a million dolkars he will continue his dastardly deeds.

Pedaphiles and sex offenders can not be rehabilitated. They will go back to their old ways of evil as soon as they are released from prison. They deserve life in prison or death. The judges who let them run free to rape and murder young children deserve the same punishment. They may not receive their punishment in this world but will surely receive it in the next.