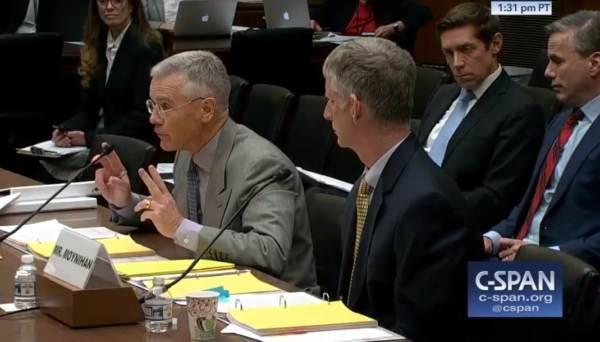 As public scrutiny mounts against the Clinton "crime syndicate," new details are constantly emerging through leaks and official investigations. The latest news is pertaining to the Clinton Foundation which is accused of operating as a foreign agent "early in its life" and "throughout its existence."

The Clinton Foundation did not operate as a 501c3 charitable foundation as required; this means it is not entitled to nonprofit status, according to not one but five highly regarded and qualified forensic investigators who gave an explosive testimony Thursday before the House Oversight and Government Reform Committee.

There will undoubtedly come a time when the evidence is insurmountable, and the Clinton cartel's empire will fall, and John Moynihan and Lawerence W. Doyle are dedicated to making that happen. Both are former expert forensic government investigators, and they based their testimony before Congress on a nearly two-year-long investigation in the Clinton Foundation, both domestically and abroad.

Both Doyle and Moynihan are graduates of the Catholic Jesuit College of the Holy Cross and were assisted by two other highly trained experts in tax law and financial forensic investigations. The investigators stressed that they obtained all the IRS and other various documents on the Clinton Foundation through legal means via the Freedom of Information Requests Act.

Republican U.S. Representative Jim Jordan also pressed Democrat officials regarding the Clinton Foundation as well as the IRS targeting conservative organizations instead of liberal ones in an obvious double standard.

Doyle and Moynihan's 2-year investigation culminated in 6,000 documents through their private firm MDA Analytics LLC. The documents were even sent to the IRS over a year and a half ago, according to John Solomon of The Hill:

"The investigation demonstrates that the foundation was not a charitable organization per se, but in point of fact was a closely held family partnership," said Doyle, who formerly worked on Wall Street and has been involved with finance for the last ten years conducting investigations. "As such, it was governed in a fashion in which it sought in large measure to advance the personal interests of its principals as detailed within the financial analysis of this submission and further confirmed within the supporting documentation and evidence section."

At one point of the hearing, Moynihan wanted to make it clear he was not motivated by political bias but rather based the work with the firm. Moynihan said to the committee, "At this point, I’d like to answer two questions, who are we? We are apolitical. We have no party affiliation to this whatsoever; No one has financed us… we are forensic investigators that approached this effort in a nonpartisan profession, objective, and independent way…we follow facts, that’s all."

Moynihan continued, "We have never been partisan. We come from law enforcement and wall street where each of us has dedicated our entire lives and praised the rule of law doing the right thing pursuing facts. We follow facts. that’s all." He was extremely adamant that he and his firm were only doing their job.

“None of this is our opinion," Moynihan continued.

Moynihan also said the reason his firm decided to investigate the Clinton Foundation was purely part of his job and even revealed his firm paid for the investigation out of their "own pockets". He told the committee, "Are you doing this for money. Yes, this is how we make a living." As he read a long list of violations the investigation uncovered Moynihan said:

"The Clinton Foundation “began acting as an agent of foreign governments ‘early in its life’ and throughout its existence. As such, the foundation should’ve registered under FARA (Foreign Agents Registration Act)," he said. "Ultimately, the Foundation and its auditors conceded in formal submissions that it did operate as a (foreign) agent. Therefore the foundation is not entitled to its 501c3 tax-exempt privileges as outlined in IRS 170 (c)2."

“Who's minding the store, looking out for the donors and minding the rule of law," said Doyle. "On that note, we followed the money, so we made extensive spreadsheets of their revenues and expenses, we analyzed their income statements, and we did a macro-review of all the donors, which is a very (jumbled) sort of foundation," said Doyle. "Less than 1/10th of one percent of the donors gave 80 percent of the money. So we follow the money."

Guess which story the Media leads with?
Will it be the well timed overshadowing deflective announcement of the Flynn and a Ex-lawyer legal issues or the Clinton's stealing/Abusing 100's of Million's in donations, dodging taxes and selling the US Gov. out.