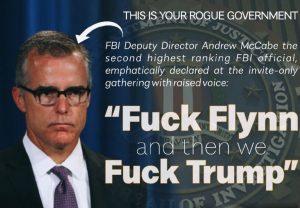 General Flynn Was Set Up - The 302 was altered!

December 1, 2017, Robert Mueller filed a plea deal with General Flynn which is very explicit. It states that on January 24, 2017, Flynn lied to the FBI (Strzok) by saying that he had not talked with Ambassador Kislyak about possible sanctions relief, when in fact he had.

The problem with this is, prior to December 1, 2017, Strzok and the other FBI agent had said the opposite - that Flynn had told them the truth. James Comey has even admitted so to Congress.

In other words, Flynn was truthful with the FBI, that he had been communicating with Kislyak about possible sanctions relief, a normal and legal act by an NSA for an incoming administration.

Someone re-wrote the original late January 2017 FD 302, to falsely portray Flynn as saying that he had not spoken with ambassador Kislyak.

It defends the circumstances of the Flynn interview.

It claims Flynn tried to "minimize" what he did. (A lie.)

Credit: DocumentCloud
Special Counsel takes issue with Flynn defending himself, after Flynn's conversation with the Russian Ambassador was leaked (felony) to WaPo.

Credit: DocumentCloud
Special Counsel cites to a 302 prepared by Peter Strzok on July 19, 2017 - nearly six months after they interviewed Flynn.

McCabe used the media reports as the basis to interview Flynn.

Flynn "stated that I [McCabe] probably knew what was said.]

It's an interview of Strzok, where he explains the purpose of the FBI investigation. Heavily redacted.

@themarketswork had a good write-up this AM.

Yates was "not happy" when Comey told her they were interviewing Flynn.

Credit: DocumentCloud
HERE IT IS

"Strzok and [the other agent] both had the impression at the time that Flynn was not lying or did not think he was lying."

Credit: DocumentCloud
Strzok and the other agent returned.

Yates, and likely Comey/McCabe "argued about the FBI's decision to interview Flynn."

Credit: DocumentCloud
The Flynn 302 was prepared six months after the interview.

The Special Counsel did not give the Court a 302 prepared immediately after the interview.

Unsure if that's due to edits/drafts or because none was prepared immediately after (as req'd by FBI policy).
Clarification: the *Strzok 302.

@seanmdav pointed something out for me: the July 2017 302 mentions a prior 302, which wasn't filed with the court.

Flynn's answers/demeanor were "documented in the 302." (see photo)

It defends the circumstances of the Flynn interview.

It claims Flynn tried to "minimize" what he did. (A lie.) pic.twitter.com/MCoFMykP5n

I was really hoping that all of these asshats would be in Prison by now. What they did to Trump, Flynn and our Country is disgraceful, and illegal. I am tired of waiting. It’s time these corrupt investigators get a Prison cell with Obama and Hillary.

well jo, after jan 1st when the executive orders regulations for martials law and military tribunals kicks in, im sure you will see some action. justice will be forthwith.

(a) Nothing in Annex 1 shall be construed to make punishable any act done or omitted prior to the date of this order that was not punishable when done or omitted. This language is very significant!....it may criminalize actions that were legal when committed; it may aggravate a crime by bringing it into a more severe category than it was in when it was committed; it may change the punishment prescribed for a crime, as by adding new penalties or extending sentences; or it may alter the rules of evidence in order to make conviction for a crime likelier than it would have been when the deed was committed.


FYI this Order is effective immediately - all the odd language/exceptions are to prevent ex post facto law arguments for charges already pending FYI court martial jurisdiction is for wrongdoing my any active duty member PLUS a wide variety of other federal personnel - including "(9) Prisoners of war in custody of the armed forces and (10) In time of war, persons serving with or accompanying an armed force in the field."

It appears changes add flexibility on the process and permit "designees" of POTUS to do things that were previously only permitted to the military judge.

(Martial law)." Pentagon sources explain that, "Trump signed Executive Order 3/1 to amend the court martial manual to get civilian legal help and prepare the public for Nuremberg II military tribunals of the cabal before truth and reconciliation."

Consider all those involved in PLANNED riots and school shootings (like Parkland and Charlottesville)... ENEMY COMBATANTS? Will they will be tried in military tribunals since US citizens were killed?

I think there is a very good chance that Flynn set up the crooked FBI by pleading guilty to their stupid charge to "break" the bullet proof NDA from his service in the Obama Administration!

I only hope all of the I's have been dotted and the T's have been crossed. It would make my dy to see evry one of these bastards spend the next 20 years behind bars or even better tried for high treason against the US and some mass executions take place.

Every President has prepared orders for martial law & some have completed several throughout their presidency. I'm certain you can find copies of previous orders by other Presidents