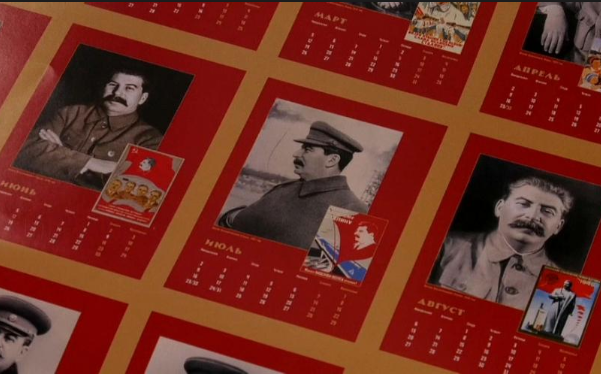 Russia – Stalin More Popular Than Ever

Yesterday, at the European film awards, the prize for best European Comedy 2018 was awarded to ‘the death of Stalin,’ by Armando Iannucci, a funny look on the power vacuum that was created after the death of the Russian leader back in the 1950s. It comes in a week where Stalin 2019 calendars are selling like hot cakes and schoolchildren are visiting his bunker. It would appear that in Russia anno 2018, Stalin is more popular than ever.

Produced in the Russian city of Yekaterinburg, the 2019 calendar of the former Communist dictator is now being printed three batches. When it was launched in 2017, it proved so popular that the original 2,500 copies sold out in no time. In 2018 the maker printed double as much and seeing the increased demand, this year they have foreseen some 6 to 7,000.

The award for European Comedy 2018 goes to THE DEATH OF STALIN (LA MORT DE STALINE) by Armando Iannucci. #efa2018 pic.twitter.com/givOHrifYE

The calendar features known paintings and pictures of the ‘dear leader’ and his most famous quotes. The producers of the work call themselves ‘bolsheviks’ and still believe in the ideals of the former Soviet Union.

65 years after Stalin's death, the Communist dictator remains a divisive figure in Russian society with many critics but also many fans. The latter can now treat themselves to a 2019 calendar filled with his images and quotes.

The calendar creators call themselves Bolsheviks and claim they support the ideas of Bolshevism, namely the ideas of improving the quality of life for the working majority as opposed to the capitalist idea of increasing profit.

Each page of the calendar has a portrait of Stalin, one of his quotes as well as images of achievements of the Soviet period.

Meanwhile, Stalin’s WWII bunker, located in Samara, some 900 kilometers east of Moscow at the Volga river, has become a tourist attraction which thousands of Russian school children visit eagerly every year.

Doorman Anton Soluyanov, who works in the bunker which also serves as a museum, admits that ever since the Presidency of Vladimir Putin, things have slowly changed when it comes to admiration of former dictator Stalin. What was not allowed a decade ago, showing respect for the former Soviet leader, is now for many the new normal.
Mr Soluyanov: “until 1990 no one knew of the existence of this bunker, not even me. I live around here and for me as well it was a complete surprise.”

The spirit of the tyrant, who had tens of millions murdered, does not instil fear in the present generation. And why should he? After all, in Russian history books Stalin counts as "an efficient manager" who managed to defeat Hitler and save the homeland.

Stalin was worse than hitler. He murdered millions upon millions of Russians,jews, Germans and anyone else he didn't like. The man was a psychopath. He is now residing in hell and will continue there until he is sent to the bottomless pit. The only reason Germany attacked Russia was because hitler found out that the russians were going to attack Germany. When the Russians occupied Germany they raped and murdered all the remaining German woman. The Russians are worse than the nazi's ever were. We don't need to glorify a mass murderer.

If not exaggerated, Solzhenitsyn asserts that since 1917, the Bolsheviks, continuing under assassin Stalin, through and even after WW2, systematically executed, and inside (and outside) their thousands of Gulags, worked, starved and froze to death, SIXTY-SIX million people, not all, but most of them CHRISTIANS (whom the Bolsheviks hated). This mass death was THE LARGEST REAL "HOLOCAUST" in modern history - but totally unknown today by most Americans, British and western Europeans and absent from our school books. Of course no publisher in the Western world dares reprint Solzhenitsyn's book in English.

Henry Makow PhD (an anti-Zionist Canadian Jew), in his "Red Symphony" essay (see Makow's savethemales.com website archives) claims that from the behind the scenes, the ROTHSCHILD BANKING CARTEL financed and controlled the BOLSHEVIKS who took over Russia.

If one wants to know the extent of the STATE TERROR and HORROR inflicted upon people in Russia since 1917 AFTER the JEWISH BOLSHEVIKS of Lenin (and his Party competitor) Trotsky, took TOTAL power, read the following informative short article by TEXE MARRS (not related to Jim Marrs) about historian Solzhenitsyn's latest book (banned in the West), "Together for Two Hundred Years."

WAS STALIN JEWISH???
Leaders - Joseph Stalin - Jews and Communism
"Djuga" means Jew. Therefore Djugashvili means Jewison. So Joe Stalin's real name, before he changed it, was Joe Jewison. It gets better, his name was Joseph David Djugashvili, a typical Jewish name. During his revolutionary days he changed his name to "Kochba", the leader of the Jews during one of the anti-Roman uprisings of the Jews.

WONDER IF HIS LINEAGE EVENTUALLY CHANGED THE NAME AGAIN TO SOROS?