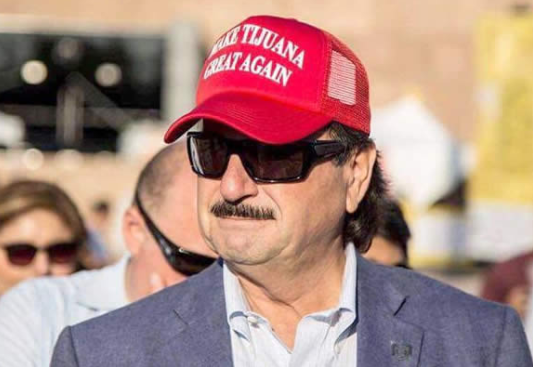 The Mexican city of Tijuana, right on the border between Mexico and the United States, is traditionally a city of migrants. But anti-immigrant feelings are popping up now that American tourists stay away, afraid of the migrant caravan and its consequences. 'It's a disaster,' declare the local shopkeepers.

"We support the mayor," the text is painted with sloppy white letters on taxi windows.

.@pacificlife Since you clearly care nothing for truth, by pulling your ads from @TuckerCarlson program. I will make sure my family and friends know that your corp. is not into truth, or protecting the borders of this country. Shame on you!!https://t.co/aVayz8q5Rk

Not on all taxis, but admittedly on a lot. That mayor, Mr Juan Manuel Gastélum, has recently been nicknamed 'the Trump of Tijuana'. With his hat stating 'Make Tijuana Great Again' he fights fiercely against the thousands of Central Americans who’ve recently arrived in the Mexican border town.

"I will not let the migrant caravan threaten our way of life," the mayor said last Saturday in a video message that he sent via Twitter into the world, "this country is ours, and we will defend it."

Gastélum asked federal authorities, and thus also newly installed President Obrador, to act against the migrants, in order to prevent the United States from closing the border again, which would be a blow to his city’s economy.

In the past six weeks, some seven thousand migrants and asylum seekers have settled in Tijuana, mostly from Honduras and El Salvador, countries ravaged by poverty and gang warfare. Thousands of others are still on their way and will probably arrive at the border before the end of the year.

Many residents of Tijuana would rather see the migrants go somewhere else. "They are not allowed to enter America," the taxi drivers explain "and over here they are a burden."

It is remarkably quiet on the fifteen lane road that connects Tijuana with the US. The busiest border crossing in the world usually features a traffic jam of at least one kilometer at the end of the afternoon. Now the cars drive to customs at once and from the other side, almost no one is coming.

"The Americans stay away," says Enrique Gutierrez, a 53-year-old man who sells candy and soft drinks to waiting drivers.

Mr. Gutierrez blames the immigrants: "It's all the fault of the Central Americans." A colleague of his, 23-year-old Juan Meza sells wool ponchos in the colors of the Mexican flag. "It is a disaster. My income has dropped by 80 percent."

Especially during weekends, Americans used to entertain themselves in discotheques and brothels until late at night. "Bienvenido a Tijuana", Manu Chao used to sing. "Tequila, sexo, marijuana."

The Americans also come during the day, for cheap medical treatments and medicines. "Now they stay at home", complains Mayor Gutierrez. "They are afraid they can not go back."

Tijuana's mayor has declared a humanitarian crisis after more than 5,000 migrants arrived in the city.

Why do Central American caravans travel to Tijuana and not some other border city?https://t.co/yKadq9n0QW

Entrepreneurs are also grumbling on the other side of the border. Many Mexicans normally do groceries and other purchases in San Ysidro, they too remain in Mexico now because of security fears.

And then there are the tens of thousands of Mexicans who study or work in the US and travel back and forth daily. Closing the border would have disastrous consequences for them.

they are a burdon north of the border too

Damn racist Mexicans. Next they will be building a border wall down south... oh wait the already did that and closed the Guatemalan border completely. Viva La Mexico!