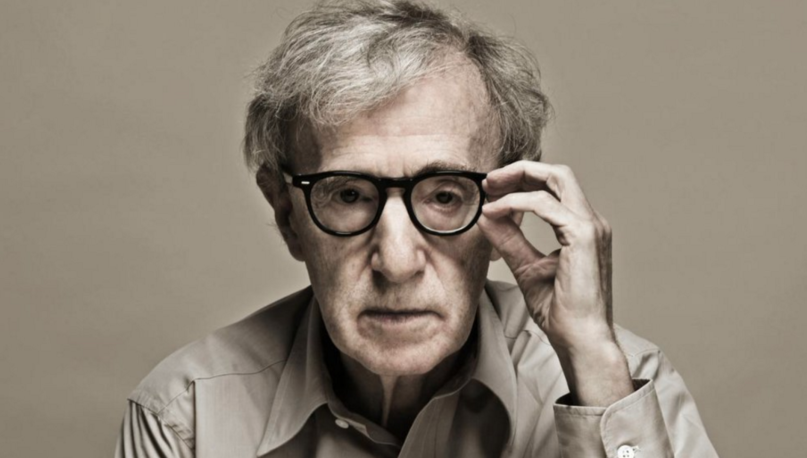 Hollywood actor and known pervert Woody Allen is back in the news, after a former advisor to convicted child sexual predator Jeffrey Epstein claims the couple had a sexual relationship when she was only sixteen-years-old.

Woody Allen and Babi Christina Engelhard, his alleged 16-year-old mistress whom he carried out an eight year sexual relationship with.


“What made me speak is I thought I could provide a perspective,” Engelhardt said. “I’m not attacking Woody… This is not ‘bring down this man.’ I’m talking about my love story. This made me who I am. I have no regrets.”

The story first surfaced in an exclusive from The Hollywood Reporter, foreshadowing the claims of 59-year-old Christina Engelhard about a lavish lifestyle of sexual deviancy along with her lover of eight years, Woody Allen.

In the age of the “#MeToo” generation, countless Hollywood filmmakers, athletes, television and film stars, politicians, and other elite celebrities have been exposed for a variety of sexual scandals including pedophilia, rape, and other intimate secrets.

Woody Allen, who himself has a laundry list of sexual scandals, some of which we're going to discuss, is the last name you expect to hear surround “#MeToo,” but to our dismay he's being accused once again.

“It wasn’t until after it was done when I really had time to think of how twisted it was when we were together,” Engelhardt said in an interview. “And how I was little more than a plaything.”

A photograph of Babi Christina Engelhard in her youth, where she was a model prior to meeting Woody Allen.

For Woody Allen, Babi Christina Engelhard was apparently a secret that he wanted to remain kept, having never publicly mentioned the relationship until the explosive reports from the victim.

She, like many women, was a long-term lover of Allen's that he simply didn't tell anyone about, according to her.

She says that despite the lack of regrets, she felt “sorry for Mia,” in regards to Woody Allen and Mia Farrow’s adopted daughter who's also now the wife of Woody Allen.

His wife Soon-Yi Previn’s relationship with Woody Allen essentially stunned the world. Not only did Woody Allen cheat on his wife, but did so with her daughter, and ended up marrying her.

“I thought, ‘Didn’t Woody have enough ‘extra,’ with or without her, that the last thing he had to do was to go for something that was totally hers?’” Engelhard said. “He had groomed Mia, trained her, to put up with all of this. Now he had no barriers. It was total disrespect.”

“Grooming,” as Engelhard refers to it, is commonplace among child sexual predators, so much that those who treat victims of pedophilia have underscored it as a means of manipulation to coax a child into having sex with an adult.

Exclusive: I spoke w Christina Engelhardt, who says she began a secret physical relationship w Woody Allen when she was 16. By her account, Mia Farrow also years later played an intimate role in it. Engelhardt believes she’s an inspiration for “Manhattan.” https://t.co/tBGtL52o0M


Babi Christina Engelhard says she was just a lost teenager at the young age of 16, with dreams of achieving success as an aspiring model in the “Big Apple,” when she met Woody Allen.

Allen, the famed Hollywood icon and powerful film director, was attending a banquet at the popular celebrity get-together in New York known as Elaine's when Engelhard claims that she first encountered her future lover.

At the time the young girl first met Allen, she says he gave her his phone number, and later called inviting her to his luxurious Fifth Avenue apartment, where both powerful politicians, billionaire philanthropists, and global celebrities would often frequent.

Woody Allen was 41-years-old at the time he began to pursue young Babi Christina Engelhard, and she claims Allen never asked her age at the time, but she did say she was a high school student.

Within weeks of their first meeting, the Jewish actor and the young shiksa became sexually intimate, which was months before the New York state age of consent at 17, she claims.

Engelhard made clear to The Hollywood Reporter that she's not out to cause any harm to Woody Allen. She says that in light of the eventful exposure as a result of the “#MeToo” movement, and the fact that Woody Allen's daughters have come forward, she wanted to get it off her chest.

As with the plight of many young victims, they're oftentimes more than willing to carry out a sexual relationship with their predators.

Pedophiles are alleged to be master manipulators, who will shower their underage fetish with either extravagant gifts, or sometimes threats in order to ensure they're silent. None of the those happened with Engelhard, who carried out an eight-year relationship with the household name of Woody Allen.

Every media outlet on the face of the earth is reporting on Woody Allen's alleged affair again, with numerous outlets expressing their lack of shock at the claims due to Allen's past.

According to Engelhard, the 1979 now classic film “Manhattan,” which has won numerous awards around the globe, was a love story explaining the secret affair between her and the director.

Manhattan was about an frustrated television writer, known as Isaac Davis. As a twice-divorced malcontent facing his middle ages alone, it told a story of romance, pedophilia, and heartbreak.

The main character, played by Allen himself, takes a turn for the worst after his wife Jill, played by Meryl Streep, leaves him for a woman.

The degeneracy of the romance is one that at the time was controversial, as the society and values of America were far different in the late 70s and early 80s.

Isaac began to date high school girl in the film known as Tracy, who is played by Mariel Hemingway. The film is a tale that expressed how Isaac knew the child was “wrong* for him to date, and begins to seek out a new lover.

That lover was named Mary, played by Diane Keaton, and was also the mistress of his best friend, played by Michael Murphy. A love triangle of sorts and a tale of deception and desperation.

According to Engelhard, she's fully aware the film was a screenplay written with the influence of her relationship with Woody Allen. She's not the first girl to claim this either, with the 17-year-old Stacey Nelkin, another underage lover of Woody Allen, also claiming that she was the inspiration for the film.

Those who were born after Woody Allen's scandalous headlines were a nightly news piece are likely wondering, “Just how many children did Woody Allen have sexual relations with?”

According to the alleged victims, as well as friends and those acquainted with Allen, Woody held an insatiable desire for young women, more often than not those underage.

Woody Allen's ex-wife Mia Farrow and his adopted daughter Soon-Yi Previn has also been Woody Allen's wife for the last twenty years, and she recently came forward to break her silence with an explosive interview.

Moses Farrow has alleged that Mia Farrow also abused the children, a claim long since denied by most of the family.

Despite this, Bechet Dumaine Allen, another daughter of Woody Allen's, has always defended her father.

For Woody Allen, sex scandals and allegations of perverse sexual attraction to children is nothing new, dating back to his tumultuous marriage with actress Mia Farrow in 1992.

It was then when Woody Allen was accused by his adopted daughter, Dylan Farrow, of having sexually assaulted her in her mother's house in Connecticut.

The headlines raged for years, with allegations so shocking that the world began to view Woody Allen as a serial sexual predator.

The pair had three children together, two adopted children, Dylan and Moses, and one biological son, Satchel. Satchel, as some recall, now goes by the name Ronan Farrow, and writes exuberant and detailed pieces about cases that are similar to that of his parents, pushing the “#MeToo” movement into the mainstream.

Mia Farrow knew that Woody Allen was having a sexual relationship with at least one of her own adoptive daughters, Soon-Yi Previn, and the world would soon discover that Dylan was also sexually assaulted.

It should come as no surprise that others exist, and some say there may be more girls that simply never came forward.

“Former model Babi Christina Engelhard, now 59, claimed for the first time that she had a secret eight-year affair with the director,” writes Rolling Stone Magazine.

The revelations also announce that Babi once worked for the notorious Jeffrey Epstein, who many have accused of being involved in child sex trafficking and serial child sexual abuse.

This concerns many of those who are now hearing Babi’s allegations about Woody, albeit it doesn't remove the possibilities that she's being honest and forward. If her claims are true, it further paints Woody Allen as a predator, who used his fame, wealth, an influence to lure young girls

In 2008, Title Here Jeffrey Epstein was convicted of soliciting an underage girl for prostitution, for which he served 13 months in a federal prison.

The new allegations against Allen do however bring about questions as to how common this type of pedophilia is in Hollywood, and leaves us asking just how many underage child predators are protected by the elite class. The same can be said of the Jeffrey Epstein scandals, who as of late we've discovered was protected from the federal government, his allies in the Democratic Party including Bill and Hillary Clinton, and the local and state courtrooms.

This new piece on Woody Allen is a disturbing portrait of grooming, when an older man takes a child under his wing and uses her however he wants to while convincing her it's her choice. https://t.co/pjtiRATruB


It seems that Hollywood is full of secrets and dirty laundry, and Woody Allen is one of the most important stories to explain the culture of protection and “looking the other way” that apparently remains prevalent among Hollywood stars even today.

After Woody Allen's history, and the events surrounding the alleged rapes of both of his daughters, who can be surprised that other girls he may have raped exist? Some say they the truth comes out eventually, and there's no running from it.

No matter if in life or in death, there is one final judge whom Woody Allen won't escape from, and that's the wrath of the Almighty, who treads not lightly on any who have harmed a child, according to scripture.

Judgment is inevitable, and pedophiles cannot escape it.

Do you have evidence she is lying? How would you rebut the allegations in this story?

Do you really enjoy writing filthy falsehood fodder? What do you think it tells us about your character?

Hello i see your blog needs visitors, if you need more traffic you should read about one interesting method. Simply search in google: Jemensso's tricks