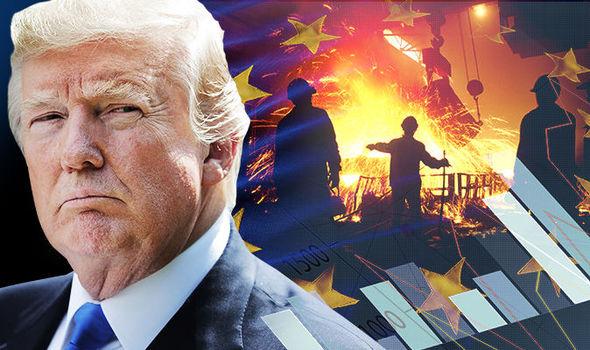 President Trump has now called for a complete withdrawal of US armed forces from the occupied land of Syria, causing outcries among the neoconservative GOP and Democratic Party’s warmongering elite.

We have defeated ISIS in Syria, my only reason for being there during the Trump Presidency.


The decision is being hailed as an enormous victory among Trump supporters and peace activists, as most believe the United States of America should put ”America First” again.

That hasn't stopped the outcry of screeching from the warmongering “RINOs” (Republicans in name only), or “NeoCons” (Neoconservatives).

Even the once-popular Senator Lindsey Graham (R-SC) turned on Trump in many ways, saying the decision may not be the best idea.

When a NeoCon exposed themselves, they're likely to blow through donors if they refuse to speak for more war. That's the only interest they have in suggesting to risk American lives for a foreign cause.

Neocon hostility toward @realDonaldTrump removing troops from Syria. Likely the first of many. @BretStephensNYT https://t.co/dcGskqmGmV


The Pentagon appears to disagree with the President's decision as well, giving so-called “push back” against his decision, reports The Wall Street Journal.

Donald Trump remains the President of the United States of America, yet the influences from lobbies such as AIPAC continue to drive their perspectives into the White House through Jared Kushner and Ivanka Trump. Those lobbies want war in Syria. Full-scale, large, and progressive wars towards regime change.

Serious question: how is Assad worse than Saudi Arabia and Israel?


Well, he bombed a fish market and killed 180 innocent people....no wait, that was Saudi Arabia.


Even unexpected viewpoints like those from Florida's Senator Marco Rubio have blasted the neoconservative politics of our forebears.

Many of the remarks made today by Marco Rubio slammed the Jewish AIPAC without ever naming them, instead of condemning Israel as a foreign power that has too much persuasion in the Middle East.

Who cares? Maybe Israel should mind their own business. ZOG has had us in never ending wars and it's time to pull the plug.


The wars have raged in Afghanistan, Syria, Iraq, Libya, Somalia, and NATO forces acting in unison across the globe- with no end in sight.

The Debt Clock as of Today:

Yet Israel wants us to fight their wars that have cost us trillions.


We cannot continue to afford these battles let alone drown our children's futures as debt slaves for a cause that seems of little interests to our babies, or ourselves.

I predicted this. I am a modern Nostradamus. https://t.co/carv26TThN


Benjamin Netanyahu, current Israeli Prime Minister and supposed friend to America through ”our greatest ally” bring about discontent for US citizens.

As we've learned that $38 billion hard-earned US Taxpayer dollars are being given away for free to Israel, we've also seen the mathematics of what that means.

The total cost of welfare Americans are giving each Israeli family of four is around $23,000.00 US dollars for doing nothing. Except for being our ally. We have homeless here. Fuck Israel. America First.

Not only this, but America notices.

The rising costs of wars in the Middle East have nearly bankrupted the United States of America, and our children are paying for it. Every child born today in the country is born into debt owing somewhere close to $65,000. Those costs are rising.

All supposedly 'left-wingers' criticising trump from ending an illegal occupation of a sovereign nation. You expose yourselves for the neocons that you are. #Syria


It's time for America to bring our troops home from Syria and begin to end all Middle Eastern wars.

We needed this. I'll be the first to say it. Thanks, Mr. President. It took enormous bravery to stand up to these influences.

remember how the Mid-East wars for Israel began? with BushCo torture-murdering 3000 of his own citizens..

The USA is expected to be the big daddy to the hole world and treat its own people like garbage. We give hundreds of billions of dollars every year to the hole world not to mention we are expected to be the world's police force but are evil self centered politicians don't even care about us enough to build all wall to protect us from all the drug dealers, terrorists, rapists murderers and lazy no good welfare refuse. We need to get out of other countries problems and first take care of our own country. Take a look at what idiots and evil devil worshipers like obama, clinton and bush have done to our country. They have given a free pass to our enemies to just come into are country illegally and commit atrocities. Now are enemies are living in our country and trying to take over from within. Congress is also to blame for the terrible mess we are in. Evil scum like Schumer. Pelosi, Mccaskill,Ryan, Flake and many others are in league with the devil and have only thought about themselves instead of the USA. We have no business sending decent, courageous americans to fight in wars that only profit these evil politicians. We need to take care of the corruption and evil in our own country before we can save the whole world. These evil politicians believe we are stupid and are laughing at us behind are back. We are simply bidding are time until the savior comes to get us out of this hell on earth. I ask myself why have they sold their soul to the devil for a little bit of nothing on this earth. Don't they realize that they will spend eternity in pain and suffering in hell. Are they so stupid that they don't care or do they believe following satan will give them eternal riches. Whatever it is that makes them choose satan over God will be their eternal downfall and it just is not worth it in the end.

To Democrats, it has nothing to do with Syria.
Their only goal is to oppose Trump on ANY issue.