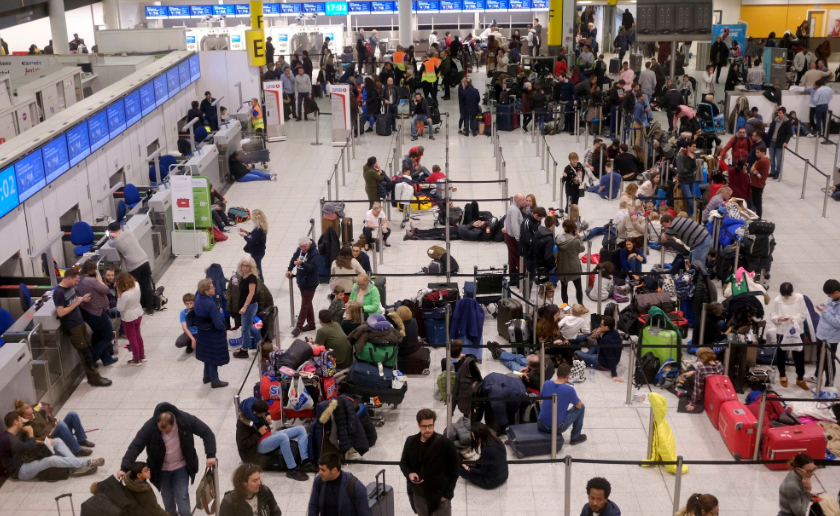 Today, another 126,000 people were anxiously awaiting to see whether their planned flight from the UK’s second biggest airport, Gatwick, would depart as police still remains unable to track the drone operators that cause the closure of the airport’s runway since Wednesday evening.

Traffic was slowly resumed on Friday, just in time for the Christmas period. Tens of thousands of travellers remain stuck at the airport, with many saying their ‘holidays are ruined because of drones.’

Whether there is really no drone flying around in the meantime anymore remains unclear. However, the first aircraft has now landed at Gatwick. It is a flight from China Eastern Airlines from Shanghai. The airport reports on its website that in the coming hours it will attempt to have a limited number of aircraft take off and land.

Since Wednesday evening drones have been detected several times in the vicinity of the airport. The police and the army were deployed, including helicopters, but they could not solve the problem yet. The shooting of the drones was declared undesirable because of the danger of stray bullets.

Gatwick reopens after drone chaos causes airport to shut down but passengers told to check before travelling https://t.co/FXlsKhAXnr

Gatwick airport director Mr Chris Woodroofe declared: "Additional mitigating measures provided by government agencies and military have given me the confidence to reopen the airport."

"My intention is to get those passengers to their destinations so that they can enjoy their Christmas."

Friday 09.30: Gatwick's runway is now available and aircraft are arriving and departing. There are knock-on delays and cancellations to flights and we strongly recommend that you check the status of your flight with your airline before setting out for the airport today. pic.twitter.com/W35C46TpNp


The closure of the second largest airport in the UK led to great nuisance. Yesterday, 760 flights, representing a total of 110,000 passengers, were cancelled.

As a result, nearly 100,000 people were stuck at the airport, which caused understandable chaos.

It remains unclear who is behind the 'drone attacks.'

One of the theories that the police are investigating is whether there is a 'lone wolf eco-terrorist' behind the drones. The environmental activist group Extinction Rebellion, which recently organized large-scale protests in London, was compelled to suppress the rumours that they are behind the possible 'eco-terror.'

"This was somebody who was deliberately trying to disrupt an airport."

Extinction Rebellion is not involved with the drones at Gatwick Airport. We've heard there are rumours circulating. We remind people that our actions are always 'above the ground' meaning we stand by our actions, are accountable and take the consequences,” the organization says in a tweet.

THE EU AND UN THREATENED TO SHUT DOWN THE AIRPORTS AND NOW THEY ARE SHIT DOWN. THESE PEOPLE ARE HOSTAGES OF TERRORIST GLOBALISM. PERIOD!

Juncker warns of no deal 'catastrophe' amid fears of grounded British flights and the worst border chaos 'since wartime' as EU reveals its plans for Brexit doomsday:

The Brussels blueprint covers 14 areas where UK withdrawal without a deal would create 'major disruption for citizens and businesses' in the remaining 27 EU states, including financial services, air transport and customs.

THIS IS A HOSTAGE/TERRORIST SITUATION!!! NOTHING LESS!!!

THEY SAID THEY WOULD DO IT AND NOW THEY HAVE!!!

BROUGHT TO YOU BY THE SAME PEOPLE WHO HAVE DESTROYED MILLIONS OF LIFES AND CAUSED MASS EXODUS!!!

JUST IN: They’re Importing 5,000 Refugees From the Middle East and Africa to Sweden... ON AIRPLANES!!!

DAMN SURE MAKES ME WONDER!!!!