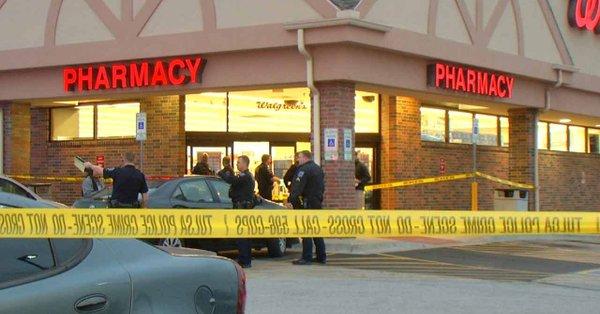 An employee at a convenience and pharmacy store in Oklahoma City defended himself and the rest of the crew from the threats of an armed intruder, and possible robber, when he used his concealed firearm to shoot the man. The armed robbery suspect died from the gunshot.


The incident happened at a Tulsa Walgreens store in Oklahoma City when an altercation occurred after an armed man took photographs from the store, and the store clerk first tried to verify if he was the rightful owner of the photos. The photographs had been left in the store for a year already.

Things became tense when the man pulled out a handgun, and jumped over the counter and brazenly grabbed the photos from the clerk without explaining if he truly owns the photographs. The other employees were then trying to desperately call the police to contain the situation.


The armed man identified as William Hurley, 52 years old, was not satisfied with getting the photographs. While he was already on his way out, he suddenly decided to turn back to approach the clerk he had an altercation with.

Tulsa police spokesperson Jeanne Pierce said that it was then that the 28-year-old employee decided to pull out his concealed-carry license firearm and fatally shot Hurley.

Video from the store’s surveillance cameras showed the entire incident.

Another Walgreens employee and a customer were also hit by gunfire and were brought to the hospital. Pierce said that both are expected to survive their gunshot wounds.

The employee who shot Hurley was not injured, and for now the police said he has not been arrested.


The employee happens to be protected under the “Stand Your Ground” law that allows people to utilize deadly force inside their home or place of business against any intruder who enters the premises “unlawfully or forcefully.”

Oklahoma is one of more than 30 states that adhere to the said law. The state even expanded such law to also include places of worship just this year.

The store management also said that they are cooperating with the police investigation for now, but will not comment further on the issue.

Pierce said that the Tulsa County district attorney has yet to decide whether to charge the clerk involved in the incident, but maintained that he wasn’t arrested because “he was legally armed.” Pierce also stressed that the evidence they have taken from the scene supports a “self-defense type of situation.”

Hurley was also a convicted felon.

Walgreens’, however, has a store policy banning their employees from carrying firearms. It is not certain yet if this will impact on the case.

Walgreens should give this guy a medal for protecting his fellow employees. The police should be thankful for the Walgreens employee who was doing their job, especially when the police say they are under no legal obligation to protect.

According to this report two innocent bystanders were hit by gunfire along with the bad guy. It isn't clear whether the bad guy or the good guy wounded those two.

One less felon gone. The employee saved the state a lot of money, and prevented violence that the perp would have brought into someone else's life. Felon, carrying a gun, pulls it over photos? He was obviously one more crime waiting to happen.

do a net search for, William Hurley. he's a savage negroid, habitual criminal.

The SS are giving the hero a quasi nod. Death to a power that can punish hero's for upholding order and personnel protection.