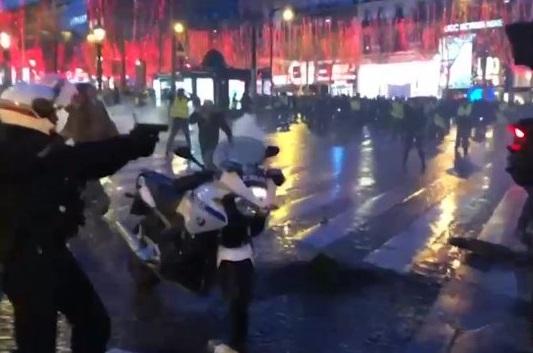 For the sixth Saturday in a row, tens of thousands of protesters of the ‘yellow vest’ (gilets jaunes) movement in France have taken to the streets again. There were fewer people than the previous weekends. Some 200 people were arrested across the country.

One of the original founders of the movement, Mr Éric Drouet, was arrested in Paris.

Meanwhile, the sight of a police officer on the Parisian Champs Elysées avenue pulling his gun on protesters has caused consternation. After they are being pelted and are forced to retreat, a motorcycle police officer pulls his gun on protesters but doesn’t shoot. In response, a small group of people attacked him and his colleague. Tensions are riding high in France, but it appears the Christmas Holidays will come to President Macron’s rescue as the protests are ever smaller in scale.

The 33-year-old Drouet, originally a truck driver, was arrested for unknown reasons. Mid-October he had called on his Facebook page for "a national blockade against the rise in fuel prices".

His call was quickly followed by tens of thousands of people and protests erupted everywhere in France against the rising cost of life.

On the Champs-Élysées, where it came to massive rioting in the past weekend again, the atmosphere was tense. Television images showed how the police had to use the water cannon. In Paris, only around 2,000 people had taken to the streets according to the French media.

Outside of the French capital, up to 40,000 people have once again demonstrated in the various cities and regions. Only 50 demonstrators were arrested outside of Paris.

At a péage (toll booth) check on the motorway south of Perpignan, not far from the Spanish border, it came to clashes between demonstrators and law enforcement officials.

In Perpignan, a 36-year-old motorist was fatally injured on Friday evening when he hit a truck in the back when it stopped at a roadblock of the yellow vests.

In Strasbourg, according to regional broadcaster France Bleu Alsace, a hundred people gathered at the Europa Bridge, which leads to Germany, and blocked traffic. Police officers arrested seven arrested seven people and a policeman was injured in the resulting skirmishes.

Last weekend, about 66,000 people had protested across the country. The center-right government has since approved billions of cost-effective social measures to defuse the conflict.

Since mid-November, the yellow vests have been demonstrating against the government's reform policy, with violent riots repeatedly occurring in the capital. The protesters want President Macron to resign.

Things going downhill fast over there, over there.

They ended up in getting his bike. He jumped on the back of another cops bike. Had he fired that gun and killed someone, that would have been full scale revolution. Only a matter of time.