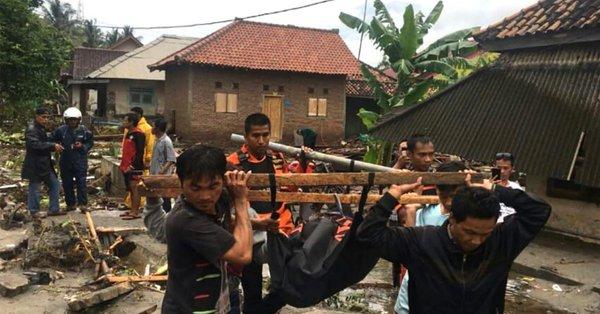 The death toll in the volcano-triggered tsunami that hit disaster-prone Indonesia has climbed to 281, up from a previous 222 casualty count as local rescuers scramble to search for more survivors in the midst of heavy rains.

#UPDATE The death toll from a volcano-triggered tsunami in Indonesia has risen to 281, with more than 1,000 people injured, according to the national disaster agency https://t.co/X0uXwmIy2F pic.twitter.com/t9vchBVlR9


There are also more reasons for concern for the devastated Southeast Asian country as experts warn the affected region could be slammed by more tidal waves.

A tsunami that devastated the area around Indonesia's Sunda Strait, leaving at least 222 dead and hundreds more injured, struck fast and without warning on Saturday.


The fresh disaster that happened Saturday night local time left more than 1,000 people injured, while more than 50 individuals remain missing. 11,687 people were also displaced by the tsunami that struck the coast of southern Sumatra and the western tip of Java around 9:30 p.m. on Saturday following a volcanic eruption.

Video has captured the the Anak Krakatau volcano erupting the day before – and more explosions the day after – a tsunami hit the coast of Indonesia, killing hundreds of people https://t.co/fSiJ78tVuN pic.twitter.com/z2ysE8FKY8

Aerial footage shows thick plume of smoke and ash above the Anak Krakatau volcano after its eruption was believed to have triggered a tsunami that killed at least 280 people in Indonesia. https://t.co/xL8WhXiG3P pic.twitter.com/iFpYP9S7Q6


Five districts were affected. Hundreds of houses, hotel units, shops, and vessels were also destroyed by the tsunami. Trees were also uprooted and left strewn all over the beaches.

Disaster agency spokesman Sutopo Purwo Nugroho shares that sadly they're expecting the number of victims and damage to continue to rise.

Most of the casualties were found at Mutiara Hotel Carita Cottage, Sambolo Village and Tanjung Lesung Hotel.

Some dramatic footage are also spreading on social media showing a wall of water suddenly crashing into a concert featuring Seventeen, a pop group, with the cascading waters hurling band members off the stage before flooding into the audience.

This is the moment the Indonesia tsunami struck a band while they were playing.

Riefian Fajarsyah, the lead singer of ‘Seventeen’ who was onstage when the waves hit, says the band’s bassist and manager were killed - and others are still missing.


Two members of the band and their manager were killed from the disaster, while three others including the lead singer’s wife remain missing.

President Donald Trump has tweeted his sympathies to Indonesia.

Unthinkable devastation from the tsunami disaster in Indonesia. More than two hundred dead and nearly a thousand injured or unaccounted for. We are praying for recovery and healing. America is with you!