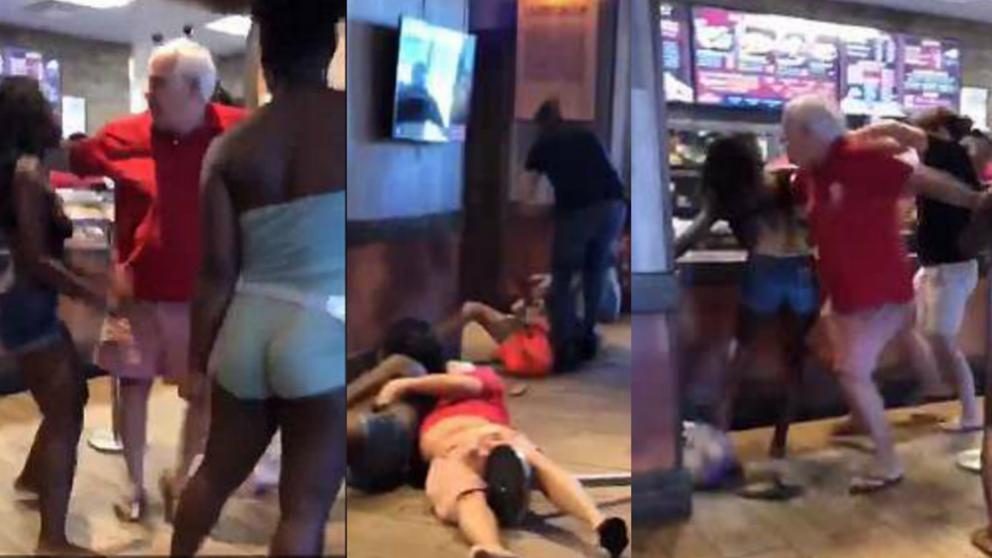 There's a video circulating across social media which depicts a White female as a Zaxby's restaurant customer in Florida who is brutalized by anti-White Black friends of the company's employees working the shift.

The employees are alleged to have refused to serve the customers, a young girl, and her father because the group of blacks seen in the video was having a conversation with a Zaxby's employee.

Instead, the employees demanded the customers leave, at which point the White victim and her father expressed frustrations at the unprofessional behavior.

The official account of what actually happened or was said in-between is purely speculative, but shortly afterward a Black female can be seen behaving like an animal.

“If you don't get the fuck out I'm gonna knock you the fuck out,” the criminal Black female says to the White child, shaking her finger violently in her face. She moves closer to the victim as the White father tried to separate and protect his daughter before the violent Black began throwing punches.

The violent savages can be seen threatening the elderly White man and his daughter, just prior to chimping out in a brutal display of barbarism.

It's crystal clear from the images, at a frame by frame pace, that the Black criminal is responsible for coming towards the White victim and her father.

The video made its way to 8ch.net's /pol/ board, where anons quickly called out the savagery in condemnation of modern America's racially charged tyranny on Whites.

One anon pointed out that a second man, who appears to be White, intervened to help break up the fight. A hero, no doubt.


Blacks, despite being a minority population in America, make up the largest numbers of violent crimes per capita, including homicides.

There were 8,383 people arrested for homicides in 2016. That's less than 50% of the total homicides solved.

Yet somehow, “White guilt” is still an indoctrination effort via headlines pushed by the mainstream media.

White guilt ‘workshops’ to teach weak-minded white people to despise themselves. A dark, suicidal disease plagues all too many of our people pic.twitter.com/CiQypxiYVC


Tyrannical egocentrism is what rules the media, and those who rule the media have not the interests of Whites or equality.

The reality is that the “diversity and inclusion” being preached is often fatal to Whites, especially those who follow the Marxist agenda.

Beheaded Norwegian Girl Posted an Anti-White Pro-Muslim Tolerance Video on Facebook.  Do you still feel sorry for her? #fo2eu https://t.co/5SuvLuyyuW

Not only is Generation-Z noticing these attempted shifts leading in the direction of genocide, but statistics surrounding their awakening are marvelous to glance at.

Whites in diverse areas are significantly less trusting than rural and suburban whites who said that they know their neighbors and that they share the same race. pic.twitter.com/we6vUAobKm


GOP strategists argue that Reps lose when they focus on immigration & win on economy — but that's not what the numbers show. Urban, suburban, and rural whites all overwhelmingly agree that immigration threatens American values. Only 2% of midterm Rep voters cited "good economy." pic.twitter.com/YeOpLsMQqC


With the next generation of White Americans becoming aware of the plan to replace them, there is a rush towards healthy living and fitness as well as self-defense training.

Currently, White Americans have no formal non-profit to counter the National Association for the Advancement of Colored People (NAACP), the Southern Poverty Law Center (SPLC), or the Anti-Defamation League.

This, with Whites being a global minority.

If Whites are going to see any “equality” in America, they're going to have to form a union or fellowship in the form of a 501c3 Non-Profit to stop such horrendous abuse from continuing.

An assault on Whites by Non-Whites is and should be prosecuted as a hate crime. Primal behavior from these savages oftentimes leads towards genocide, as we've witnessed in South Africa.

The incident at Zaxby's is further proof of the behavior of animals when they're uncaged, in what the Daily Mail says was an incident that occurred in September, claiming the fight took place over alleged “racist” remarks.

This is common behavior of Blacks and their arrogance, who will simply accuse a White victim of saying something racially-charged in order to fulfill their goal of avoiding jail.

There is no doubt this man was trying to protect his daughter from the horde of incoming barbarians ready to attack her. While we don't know her age, it's safe to say she's possibly underage if not recently turned adult.

If the roles were reversed, the media would cry afoul in a heartbeat. Instead, outlets like the Daily Mail have speculated in the same fashion as me and /pol/ anons on this video. See how that works?

Anti-White racism is being ignored in America and we're tired of it, and that's why I'm providing the content I do with such writing. Not only does it display the hypocrisy of an extremely Anti-White media, but further risks dangers to Whites because of lies attributed to the media.

What would you do if your daughter was attacked in line, even if she had said a response to the Blacks demanding she and her dad leave? Likely the same thing. This man easily could have hurt the Black attacker, but instead tried to break up the assault on his child in the least violent way possible, even ending it with a restraining hold that wouldn't cause injury.