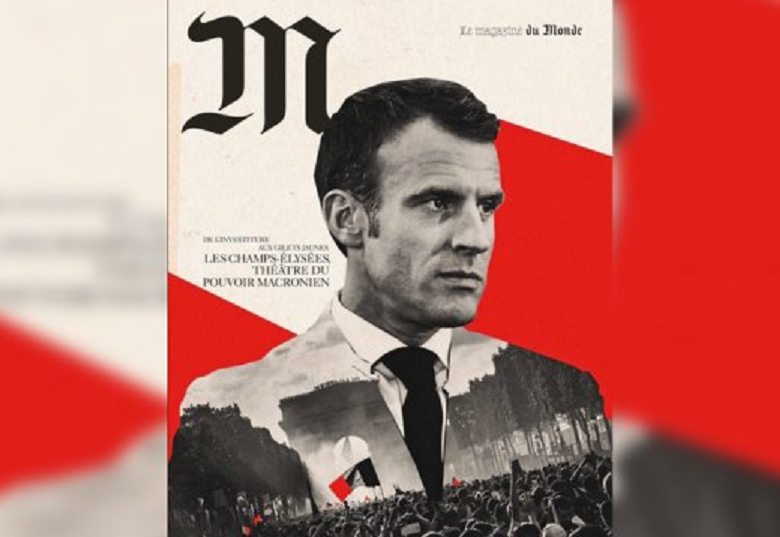 The newspaper published a piece about the past year of President Macron's presidency and showed an edited photo of the head of state in red, white and black. Below him is a mass on the Champs Élysées. According to different people, Le Monde thus makes the comparison with nazi-propaganda and more specifically with the way in which Adolf Hitler was portrayed.

The way in which the magazine’s 'M' was depicted also looks suspiciously like the Gothic script that the Nazis used.

Has #LeMonde deliberately chosen to paint #Macron as a Nazi ? pic.twitter.com/Kkst9A6auC

No worries, according to editorial director Luc Bronner on the website of the newspaper. "The elements used refer to the chart of Russian constructivists at the beginning of the 20th century. They also used black and red."

In other words, the comparisons with Nazis of which the newspaper was accused were never intended, says Mr. Bronner. Seeing the social media uproar in Parisian circles mostly, the newspaper apologized for the cover afterward, stating: "we apologize to anyone who was shocked by the images used."

Mr Bronner afterwards specified that the cover, which was made by the layout director of the newspaper, was inspired by the work of different artists "more specifically that of Lincoln Agnew, who worked several times for the M magazine of Le Monde."

French newspaper Le Monde is forced to apologise after likening Macron to Adolf Hitler on its magazine cover amid yellow vest protests https://t.co/La1iUNuBUc

But even after those excuses the uproar continued. After all, several people on social media noticed that the cover was suspiciously similar to an earlier work by the same Lincoln Agnew and could therefore have been pirated.

Saucy detail, the image in question by Lincoln Agnew showed Adolf Hitler, with a cheering mass below for the burning Reichstag in 1933. Several loyal readers of the newspaper stated they would not renew their 2019 subscriptions.

Commenters on social media were less forgiving, with the Brits being most shocked that the French even: ”The worst take. Le Monde literally depicts Macron as Hitler & compares his reaction to rioting to a Nazi power demonstration, in a country that was occupied by Nazis. & that's tame? While the "thick-skinned" British elite are shocked because Corbyn may have said stupid woman.”

They should not apologize for getting it right.

TOTALITARIANISM IS TOTALITARIANISM!!! I DONT CARE WHAT NAME OR MASK YOU TRY TO HIDE IT BEHIND!!! NAZI, COMMUNIST, ENVIRONMENTALIST, GLOBALIST, SATANIST, WHATS THE DIFFERENCE? THERE AINT NO DAMN DIFFERENCE!!! ALL ARE MURDERING REGIMES FOR THEIR PERSONAL AGENDAS!!!

Hitler was a good and great man who gassed no one! that's fake history, jew lies... Macron is a cowerdly traitor to his own people.