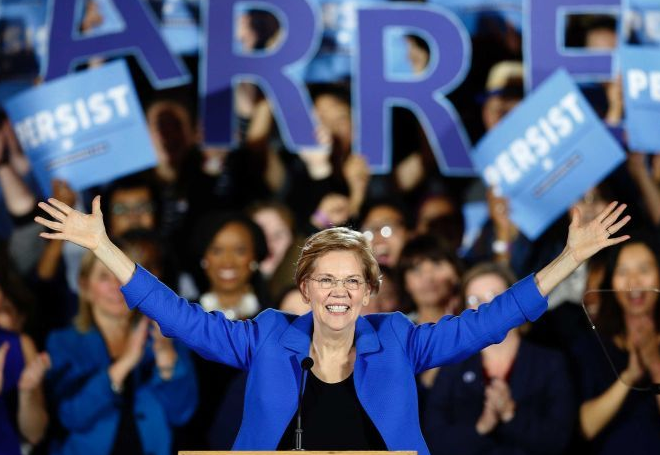 High-profile Democrat Senator Elisabeth Warren announced her candidacy for the American presidential elections of 2020. She is the most prominent Democratic politician who has so far announced that she wants to challenge President Donald Trump.

With an economically left-wing oriented program, she plans to win back the disgruntled middle class, the group that helped Trump win in 2016.

"The American middle class is under attack," Warren says in the video with which she announced her candidacy on Monday. “How did that happen? Billionaires and large companies decided that they wanted a larger piece of the pie. They have used politicians to cut off a large piece for them. "

What are her chances?

It is difficult to say how likely it is that 69-year-old Ms Warren will be taking on Trump in 2020. Presumably, she will be one of the candidates in a very crowded field for Democrats.

She positions herself quite left-wing and thus directly threatens the chances of Vermont Senator Bernie Sanders (who gave Hillary Clinton quite a run for her money four years ago to win the Democratic nomination). But Warren seems to have rejected many of those voters with her distinct style in recent years.

Trump jabs at Warren: "Ask her psychiatrist" if she can win in 2020 https://t.co/bJ0qWROib7 pic.twitter.com/rZW71FpjHL

Elizabeth Warren made her name internationally during the 2016 campaign because of her fierce attacks on Trump. She herself was not a candidate but from the side-lines she attacked the Republican newcomer hard and personally.
Almost no one from the American political establishment did that at that time.

President Trump consistently refers to her as 'Pocahontas' in his tweets, after the famous 17th-century Indian woman, because Ms Warren claimed to descend from the native American population.

Pete Hegseth: Elizabeth Warren "says she’s in the fight all the way Mr. President, do you really think she believes she can win?"

President Donald Trump: "Well, that I don’t know. You’d have to ask her psychiatrist." pic.twitter.com/sOzH6JZFrk

Warren ultimately gained very little from the claim. A DNA revealed in October 2018 that most Americans have more native American DNA in their bodies than Ms Warren does.

Asked about her candidacy, Mr Trump responded: “She did very badly in proving that she was of Indian heritage.”

“That didn’t work out too well. I think you have more than she does and maybe I do, too. And I have nothing. So, you know, we’ll see how she does. I wish her well. I hope she does well. I’d love to run against her.”

Asked if he thought she could win, he replied: “Well, that I don’t know. You’d have to ask her psychiatrist.”

American's 1st Trans-Racial Politician.
What will she feel like next week?
As she runs her campaign she can claim she has Indian blood from just about any state in the USA.

Because her birth place is Oklahoma and was temporary home to almost every American Indian tribe at one point or another.

BTW: I feel she is just a Public & Media distraction.

The real Democratic-Socialist will be someone entirely different.

Faux and Willard (Romney) would make a good pair! Birds of a feather and all....

oh the shrink .. that could be easy money but so annoying to indulge .. is she just after another feather.. ?