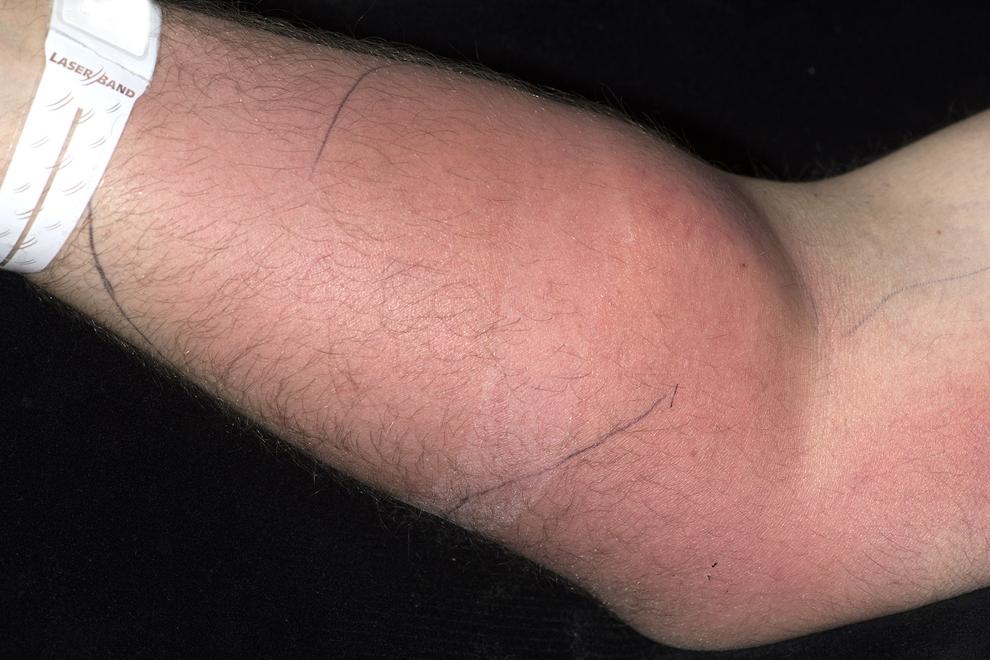 Irish Medical Journal Warns Against Shooting Up Semen For Science

Don't intravenously inject your own semen in your body! It's not the kind of thing you expect to have to explain to someone, but you have to realize everytime you read a disclaimer warning that the flea and tick remover is for external use only or other obvious instructions, that likely at least one person made that stupid mistake before the admonition was added to the package.

Ireland is known for a lot of things. Limericks, hard drinking, leprechauns, and potatoes to name a few. It is yet to be seen whether a recent event will result in adding "spunk injections" to that list. Regardless, an Irish medical journal felt the need to offer a very specific warning against devising independent cures to your medical afflictions especially when that cure involves shooting up sperm.

The Irish medical journal in question (incidentally Irish Medical Journal) apparently couldn't resist displaying some of the characteristic sharp wit, and dark comedy Celts are famed for in the title: "Semenly” Harmless Back Pain: An Unusual Presentation of a Subcutaneous Abscess.

The medical journal authors noted that "no other reported cases of intravenous semen injection "was found either in medical literature or even within the context of a "broader search of internet sites and forums."

The poor fellow who concocted the idea of a popping pud-juice into his arm ended up with a severe subcutaneous abscess and likely still had the initial back pain he was trying to "cure" through the outlandish alternative treatment. Apparently while complaining to the doctor of his back pain, they noticed a red mark on his arm whereupon he admitted he had been "experimenting" with semen injections in the hopes of dulling the pain.

The journal mentioned that similar cases of injection of harmful substances from mercury, gasoline, charcoal, lighter fluid and even hydrochloric acid had been reported in suicide attempts, but shooting up strange bodily fluids for therapeutic purposes seemed to be brand new. So, I guess congratulations Ireland for some astonishing, if ill-conceived, attempted innovation.

In the guy's defense, there is some mention of subcutaneous semen injection into rats, though the journal doesn't go into detail regarding whether the rat studies were related to pain relief. Considering some of the scientific studies I've read, it's quite possible it was done just out of sheer morbid curiosity, boredom or simple sadism.

The moral of the story is to refrain from undertaking "innovative treatments prior to clinical research in the form of phased trials inclusive of safety and efficacy assessments." In short, leave it to the professionals next time, Muirchertach!

WTF how retarded can these people be? I inject semen into my wife myself. I do this whenever I feel like it but often to cure that compulsion I get when she bends over in front of me.

obviously he should have had someone else's injected to his backside for back problems, not in his arm

Every day we stray further from God's light.

"As Above, So Below." - precept of ancient sacred geometry

"On Earth as it is in the heavens." - Jesus' The Lord's Prayer

The ancients knew that the combination of 7 & 4 seen in the design of the heavens was sacred and imitated it in their earthly designs. The Sumerians were apparently the first to keep astronomical written records. They tracked the 4 seasons and their first zodiac was divided into 4 sections. The Mesopotamians built their ziggurats - observatories/temples, e.g. Tower of Babel (Babylon) - to be 7 levels (six stories with a rooftop observatory) with 4 sides/4 corners. The information they gathered was sacred because it allowed them to make predictions about the future.

The ancient Egyptians were also astrologers/astronomers. They - like the Sumerians - took the common cubits of 6 palms x 4 fingers = 24 digits and added a palm to create the sacred royal cubits of 7 palms x 4 fingers = 28 digits. All the Egyptian sacred buildings including the first Step Pyramid of Pharaoh Djoser at Saqqara were designed by their architects using royal cubits and the sacred combination of 7 & 4 as their foundation. The Step Pyramid has 7 levels (six stories) and 4 visible sides/4 corners. The Osiris(74) Story is perhaps religion's oldest and there were 74 who opposed him.

The ancient Hebrews were aware of the sacred combination of 7 & 4 and encoded it in many ways. Whoever first told their Creation Story (Moses the 'Prince of Egypt'?) aligned Genasis 1:1 having 7 Hebrew words and 28 (7x4) letters. "And God said, 'Let there be lights in the heavens to divide the day from the night: and they shall serve also as signs and for festive seasons, and for cycles of days and years (and omens of eclipses)'…the 4th day (of 7)." - Genasis 1:14-19. Genasis 7:4 first introduces the sacred and recurring theme of the #40, "For in 7 days, it will rain for 40 days and 40 nights." Besides Noah, there were 7 people on the Ark in the Story and 4 were the wives.

Jacob/Yakov/Israel and his family were 75 when they entered Egypt.

King(4) Solomon(7) began building the Temple in the 4th year of his reign and it took 7 years to complete.

The Revelation's "7 Seals" are opened, yet only "4 Horsemen" are unleashed.

Some people can will believe anything.