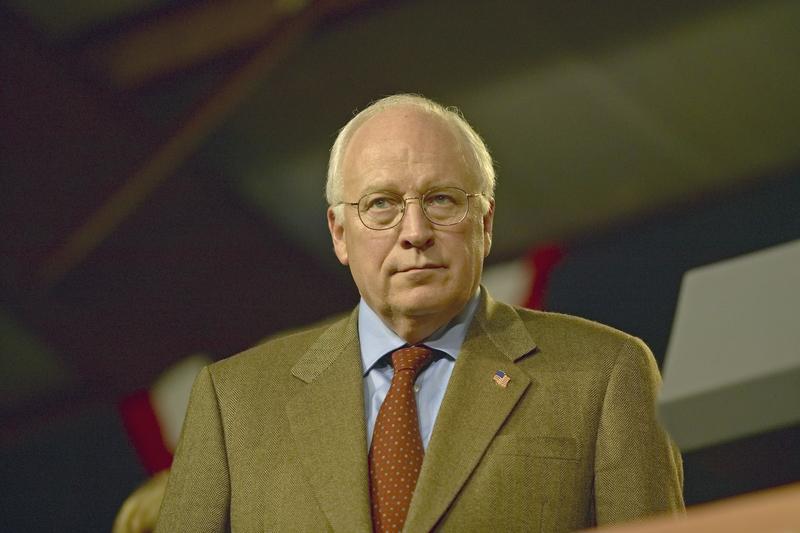 As soon as I saw the trailer for Adam McKay's "Vice," I was immediately intrigued. The subject matter, the tone of the film and the cast itself was enough to make me a bit more than curious. That said, it would have to be pretty good to live up to my expectations. With all said and done, I'd say it came pretty close.

The movie Vice dropped in theaters Christmas Day and prospective DVD, Bluray and streaming release date are slated for March 2019. Vice takes aim at George W. Bush's vice president Dick Cheney who served as George H.W. Bush's Secretary of Defense during the Desert Storm years. Cheney also oversaw the invasion of Panama under Bush I, but more people likely remember him as "L'éminence grise," the true power behind the throne of George W. Bush.

Bush Jr. was, of course, a party boy and that aspect of his character, as well as the fact that he didn't seem to want to be president as much as his dad wanted him to, was beautifully captured by Sam Rockwell. Rockwell's Bush is part of what makes for a fun viewing experience, but Rockwell doesn't entirely steal the show either.

Christian Bale is literally unrecognizable as Dick Cheney. He draws on the same inner sociopathic jerk he channeled in American Psycho (and apparently his real life) to bring to life a somewhat cold and brutal "end justifies the means" character who was responsible for helping kick off the unrest in the Middle East that would eventually lead to the creation of ISIS and the migrant crisis Europe and the US face today.

I was a bit surprised as Steve Carrell's portrayal of Donald Rumsfeld. Bonus points for finding actors who did look fairly similar to minor characters like Paul Wolfowitz, Condeleeza Rice and Colin Powell (played by Tyler Perry!). I wondered if Steve Carrell would be able to handle a semi-serious performance of SecDef Rummy. Despite being generally typecast as a bit of a well-meaning boob, Carrell deploys fangs as Cheney's long-time partner in crime from Nixon and Ford through Bush I and II.

The film also manages to utilize some fresh and innovative techniques that would feel far more gimmicky if applied over liberally by the likes of, say, Wes Anderson. There was one plot device that I felt was a little overly "cutesy." I won't go into details as it would come under the category of a spoiler. I will, however, say, trying to pass off a "twist" that originated almost 70 years ago in a Billy Wilder flick may fool millennials but not those of us who are versed in classic cinema. There, now I feel I may have said too much anyway.

Gimmicks and tricks aside, it's a surprisingly fun, funny look inside the Cheney rise to power but it definitely still comes up somewhat short in places. As a friend mentioned, it surprisingly leaves out pretty much the whole of the Gulf War. An opportunity to point out how both Iraq wars were shaped by PR firms might have been a decent addition. There's also practically no mention of Cheney's numerous dealings in Central and Latin America.

Critics were mostly mixed about the film. It seems to have been one that folks either loved or hated, except in the cases where they loved and hated it. A complaint that shows up time and again is that the movie seems, in parts, "played for laughs." That is certainly the case. Rarely do you see a film jump cut from a scene of torture (errr, ummm, "enhanced interrogation") and back into the comedic vein in the same moment. For folks who like their humor a bit dark though, this shouldn't be much of a problem.

A bigger issue, that may be related to the satirical bent of the film, is how the historical characters are reduced, somewhat to caricatures. A perfect example would be the scene where young Cheney asks young Rumsfeld, "What do we believe?" during their stint in the Nixon White House. For the most part, the film is incredibly accurate and I'll admit, I even learned a thing or two like how it was Fred Luntz who was responsible for re-branding "global warming" as "climate change." That said, I'm fairly certain that nothing similar to this ever happened.

It seems a bit rushed and even at over 2 hours in duration you feel like there was a lot left on the cutting room floor. Vox asked whether or not the movie should have "humanized" Cheney more. I don't really feel that's the issue. There were points, like the made-up cartoon villain exchange aforementioned, "Values? Morals?!? Muwahhahahahaha, not us!" where it seems like they tried to embellish a bit to make the situation look worse than it is while missing out on chances to show that it was actually just as bad as all that.

That said, if you go in expecting something like Oliver Stone's "based incredibly loosely on a true story" JFK you may end up entertained and accidentally educated about a couple things. Oh, and definitely stick around for a bit after the credits roll. The second "focus group" sequence did make me laugh out loud.

To be honest, Vice and Clint Eastwood's The Mule were the only films from 2018 I really felt strongly enough to seek out and watch. Vice, while not perfect, was overall a nice diversion with an injection of some "fun facts" on top. As soon as The Mule can be pirated is available for review, will give thoughts on that one as well.
Share this article

interesting , thank you Philip and Joe

Oh, well, the film sounds like a real drag through the mud! A real flashback festival for masochists!
Besides, the film seems to be just someone’s own narcissistic confirmation of what most people think happened anyway! And we got THAT "alternative" version for free from FAKE NEWS Cnn et al --- no need to line someone else's pockets by PAYING to see the rehash! Nope, think I will pass ... But thanks for the review --- it saves a lot of people from wasting their time and hard earned money actually going to a movie theater to see this film!

Does the Vice movie even mention PNAC Project for the New American Century???????????

PRETTY SURE IT DOESNT TELL THE TRUTH THE WHOLE TRUTH AND NOTHING BUT THE TRUTH SO HELP THEM GOD. I WANT TO SEE THE TRUTH ABOUT THE TREASONOUS SNAKES THAT ORCHESTRATED 911 AND THE DESTRUCTION OF AMERICA. I WANT TO SEE JUSTICE ON THE BIG SCREEN AND IN REAL LIFE!!!

EXACTLY! Cheney is a 9/11 mastermind. but there is hope. check out "lawyers committee for 9/11 Truth & Justice". they FINALLY got the NY attny general to DO HIS JOB and agree to convene a Grand Jury to hear the mountains of evidence that The Trade Towers were rigged with explosives. this is HUGE. The Grand Jury will have subpoena powers . Larry Silverstein must be sweating bullets.