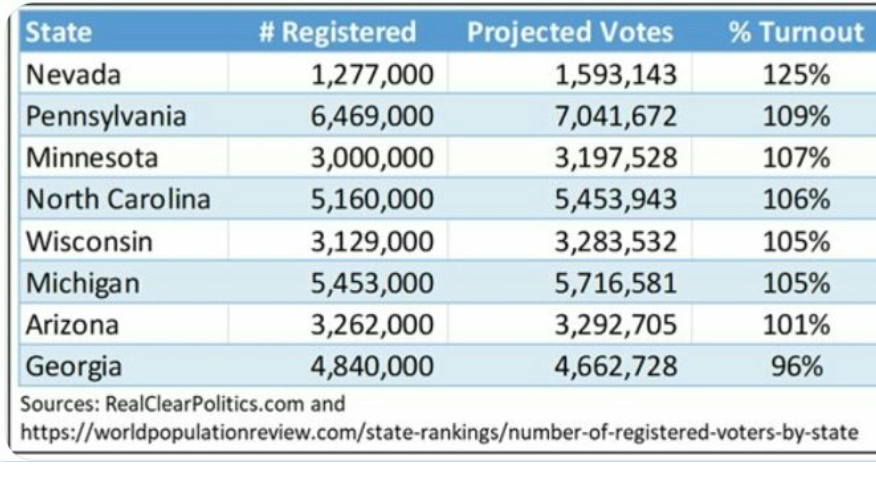 Joe Biden has done the impossible. States from Nevada to Wisconsin to Georgia are reporting record numbers of registered voters having voted for the mentally embattled China pawn. (This is an opinion piece)

So zealous were the Marxist minions perpetrating the fraud, they forgot one simple rule. Something any NPC Socialist with a room-temp IQ should have learned in Ballot-Box Stuffing 101: You Can't Have More Votes Than Voters! (see above)

Gee, I wonder what their trying to pull.... pic.twitter.com/xy4W1j8OEX


After Fox News astonishingly called Arizona for Biden (something they surely regret now) and Biden-folk sent home poll-workers in Georgia (they were getting "tired"), all Americans are left with one question: How corrupt is this whole thing?

Politicians, press, media monopolies, George Soros and even the FBI have all taken brazen roles in dismantling Democracy for the purpose of enacting their own government. And we Americans who don't participate will be punished in a world of Social Credit Scoring, threats to our livelihood and revocation of our Constitutional Rights.

Every American, regardless of political affiliation or religion should take this as a clear sign. We have an opportunity right now in in the next 77 days to set fire to corrupt bastards (figuratively) while they are out in the open. Joe Biden will not lay his hand on a Bible and claim leadership of our Nation without the pure evil that surrounds him from being exposed.