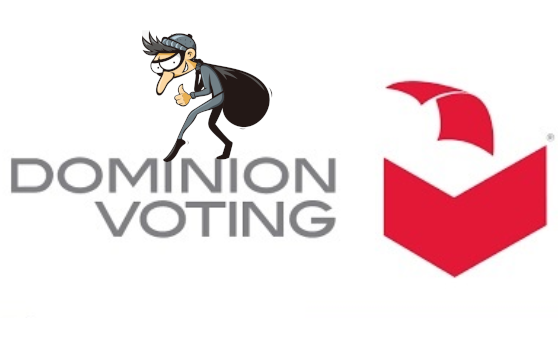 Every day, more whistle-blowers, software engineers, witnesses and forensic analysts are stepping forward to report irregularities which could skew election numbers heavily in Biden's favor. The gravity of this possibility should have an honest media in a frenzy. Instead, they have programmed much of the public to repeat "there is no evidence." It is reminiscent of reporters covering peaceful protests with a backdrop of a city on fire.

The very future of Democracy could be at stake. Any claim of voter fraud deserves our closest attention. Let's review:

1) Sydney Powell, one of Trump's attorneys dealing with the matter, is certain.

From the transcript of an interview she did with Fox Business on Sunday:

"Well, I can hardly wait to put forth all the evidence we have collected on Dominion, starting with the fact that it was created to produce altered voting results in Venezuela for Hugo Chavez and then shipped internationally to manipulate votes for purchase in other countries — including this one. It was funded by money from Venezuela and Cuba, and China has a role in it also. So, if you wanna talk about foreign election interference, we certainly have it now. We have staggering statistical evidence. We have staggering testimony from witnesses, including one who was personally in briefings when all of this was discussed and planned, beginning with Hugo Chavez and how it was designed there, and then saw it happening in the country. As soon as the state shut down on election night and stopped counting, those are the states where the most egregious problems occurred. We also need to look at, and we’re beginning to collect evidence, on the financial interest of some of the governors and secretaries of state who actually bought into the Dominion systems, surprisingly enough — Hunter Biden-type graft to line their own pockets by getting voting machines in that would either make sure their election was successful or they got money for their family from it.

Well, for fraud this serious, I think even if the states are stupid enough to go ahead and certify the votes where we know the machines were operating and producing altered election results — if they’re stupid enough to do that — then they will be set aside by the fraud also. I mean, we’re talking about hundreds of thousands of votes. President Trump won this election in a landslide. It’s gonna be irrefutable, and we’re — patriots are coming forward all, every day, all day, faster than we can collect their information with the testimony they’re willing to give under oath about how their votes were stolen and how the machines operated. They were updated the night of the election, sometimes after the election. We’ve got statistical evidence that shows hundreds of thousands of votes being just put in and replicated. It’s gonna be — there needs to be a massive criminal investigation, and it’s going to affect millions of voters and elections."

Rudy Giuliani made an appearance on Sunday Morning Futures with Maria Bartiromo echoing Powell's statements. “Well, I know… I can prove that they did it in Michigan. I can prove it with witnesses.” He went further to say, "we have more than enough illegal ballots already documented to overturn the result in that state.” This is a phenomenal claim. What's more, he is also alleging that the cities of Philadelphia, Pittsburgh, Phoenix and Milwaukee took part in the fraud - all in key states which could hand Trump a victory.

3) Statistical Impossibilities in Wisconsin and Michigan.

According to an analysis done by Red Elephant:

Apparently Joe Biden smashed Barack Obama’s 2008 turnout in most places in the country. In both Michigan and Wisconsin, several vote dumps occurred at approximately 4am on Wednesday morning, which showed that Joe Biden received almost 100 percent of the votes. President Trump was leading by hundreds of thousands of votes in both states as America went to sleep, and turnout in the state of Wisconsin seems to be particularly impossible."

The same site reported, "Some data scientists allege that Biden’s Vote Tallies in some parts of the country violate Benford’s Law. All of the other candidates’ tallies follow Benford’s law across the country, except for Biden when he gets into some tight races. Benford’s law is one accepted test for catching election fraud, used by the State Department and forensic accountants."

The Gateway Pundit's research reveals, "The current results of the Presidential election in Pennsylvania reported to the public are fraudulent because they are nearly statistically impossible." The irregularities came to light when PA started counting mail-in ballots (in many cases when poll-watchers were refused access).

"When we looked at these statistics and we identified a pattern that is virtually mathematically impossible. The President won two thirds of the Election Day vote. But with the basic exception of Philadelphia, the President won around 80% of the vote in each county in the state. (See the blue line in basic the chart below showing the percent of total election day votes won by President Trump.) Philadelphia is so large that it offsets these numbers and brings the President’s results down to around 65% of the state’s votes on Election Day."

6) Congressman Louie Ghomert has stated that The U.S. Army has seized servers for Dominion in Germany.

Diplomats and the United States Armed Forces are now involved. Seizing a company's assets overseas without going through local court procedures is very uncommon and usually means something very serious, such as a threat to National Security is involved.

7) According to Wikileaks, documents Smartmatic (read Dominion) machines were used to rig the 2004 Venezuela elections in favor of Marxist candidate Hugo Chavez.

8) Whistleblower Melissa Carone has testified she witnessed and told her supervisor about massive fraud in Detroit.

9) Dominion is a foreign corporation. 96% of political donations made by its employees went to Democrats. Source: FEC

Undoubtedly many Democrats scoff at using The President as a source of information, but when was he last wrong about something like this? History has proven Trump right at every major crossroad. Taking a portion of a Tweet out of context, the media gleefully declared that Trump has conceded. This was yet another gross act of cowardice in the propaganda war.

In fact, Trump names Dominion. "NO VOTE WATCHERS OR OBSERVERS allowed, vote tabulated by a Radical Left privately owned company, Dominion, with a bad reputation & bum equipment that couldn’t even qualify for Texas (which I won by a lot!), the Fake & Silent Media, & more!” Followed by, "All of the mechanical “glitches” that took place on Election Night were really THEM getting caught trying to steal votes. They succeeded plenty, however, without getting caught. Mail-in elections are a sick joke!"

The propaganda war should be over, yet it rages with record numbers on Twitter with trending hashtags in tweets such as: "Goldwater: even Trump tweeted that @JoeBiden won although he wasn’t happy about it. Republican officials in charge of the late-called states all said the elections were free & fair & that Biden won. #NoVoterFraudLooking forward to #PresidentBiden after #SoreLoserTrump."

These people should be celebrating if they truly believe Biden didn't cheat. Why are they worried now? The truth is they have more to worry about than they can possibly imagine. Investigators and prosecutors should focus on all parties involved and that particularly includes social and main-stream media demagogues hoping to avoid prosecution for many other illegal activities. These are crimes punishable under RICO and clearly crimes of sedition. Never again should the future of Democracy be so gravely endangered.